ATHENS, Greece (RNS) – In a few days, Ecumenical Patriarch of Constantinople Bartholomew, the foremost leader in the Eastern Christian church, is scheduled to recognize the newly founded Ukrainian Orthodox Church.

Bartholomew plans to give the tomos, or the formal decree of autocephaly, to primate Metropolitan Epiphanius in an elaborate ceremony in Istanbul that coincides with one of the most important celebrations for Orthodoxy, the Epiphany.

But not everyone in the Orthodox world will be celebrating with them.

Bartholomew’s decision to create an independent Orthodox church in Ukraine has created a rift between Moscow and Istanbul. Now other churches are lining up on the divide, with clerics issuing anathemas and excommunications while other opponents beat priests, hurl Molotov cocktails and conduct cyberattacks.

“Its traditional allies have already sided with Moscow,” said Ilias Kouskouvelis, a professor of international relations at the University of Macedonia in northern Greece. “Allies like Serbia, Bulgaria and, naturally, the Patriarchate of Antioch, due to its proximity with Syria and Russia’s relationship with the Assad regime. Those who haven’t spoken up, like the Greek church, are siding with the Ecumenical Patriarch.” Ecumenical Patriarch Bartholomew I, center, leader of the world’s Orthodox Christians, stands at the patriarchate in Istanbul as Ukrainian President Petro Poroshenko leaves after their meeting on Nov. 3, 2018. Poroshenko and Bartholomew signed an agreement between Ukraine and the patriarchate for their cooperation in granting the Ukrainian Orthodox Church its autocephaly. (AP Photo/Lefteris Pitarakis)

“He suddenly states that Kiev was never given the full jurisdiction to the Moscow Patriarchate,” said Daniil in an interview published on the church’s official website.

But only the Ukrainian Orthodox Church under the Moscow Patriarchate was widely recognized in the Orthodox world. The two others were considered schismatic.

The Polish Orthodox Synod also published a communiqué stating that it was irrational to recognize Metropolitan Epiphanius. Until recently, the synod argued, Bartholomew and other Orthodox leaders considered the Ukrainian Orthodox Church-Kiev Patriarchate as schismatic, claiming it illegally broke away from the Moscow church.

“Persons deprived of episcopal ordinations and priests cannot be leaders in introducing peace in the Orthodox Church of Ukraine,” read the communiqué. “Their actions cause even more confusion and scandal.” 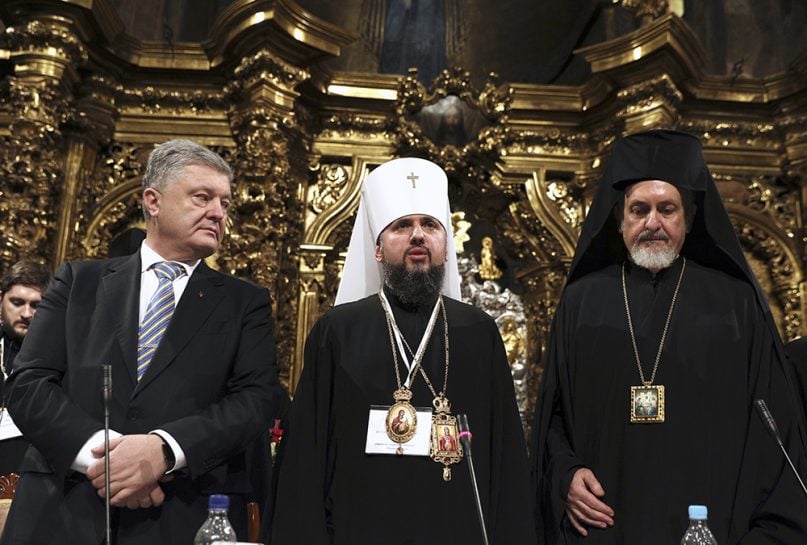 Members of other churches that have provoked schisms, like the Macedonian and the Montenegrin churches, which broke off from the Serbian church, are hopeful Bartholomew might also recognize them, too.

“The Patriarchate of Constantinople made a canonically unfounded decision to rehabilitate and recognize as bishops two leaders of schismatic groups in Ukraine,” the Serbian church wrote in an announcement on its website.

The Moscow Patriarchate has been in charge of Ukraine’s Christians for more than 330 years since Constantinople’s Ecumenical Patriarch Dionysius IV transferred part of the Kiev-based Ukrainian church’s jurisdiction to Moscow, then capital of imperial Russia.

But Dionysius made the transfer with a synodal letter and not a tomos, which would fully transfer it to Moscow, leaving the Ukrainian church doctrinal wiggle room for independence.

“Russia today, but also during its czarist and communist periods, used religion as an instrument to expand and increase its influence,” Kouskouvelis said.

An independent Ukrainian church undercuts Russian President Vladimir Putin’s plans to expand his country’s power, including boosting Moscow as a so-called Third Rome that would become a center of the Orthodox faith.

With 150 million followers, the Russian Orthodox Church is the largest of the Orthodox. Bartholomew’s recognition of a church in Ukraine would remove some 30 million people from the Russian church.

The disagreement between Istanbul and Moscow is part of the ongoing political conflict in the region after Russia annexed Crimea in 2014. Tensions are still high.

On Nov. 25, in the Kerch Strait near the peninsula, the Russian coast guard fired upon and captured three Ukrainian naval vessels attempting to pass from the Black Sea into the Sea of Azov. Since Crimea’s annexation, Ukrainian politicians have been pushing harder for independence from Moscow. President Petro Poroshenko has met multiple times with Bartholomew to talk about an independent Ukrainian church and will be accompanying Metropolitan Epiphanius in Istanbul in January.

When Bartholomew, also known among Orthodox patriarchs as “first among equals,” announced in October that all three Orthodox churches in Ukraine should unite into a new, single institution that would be independent and therefore not schismatic, Moscow cut ties with Istanbul.

Moscow also retaliated by calling its members to stop their pilgrimages and donations to Mount Athos monasteries in Greece, one of the most important centers of Eastern Orthodox monasticism. Pious Russian men flock there and have helped renovate the peninsula’s stunning ancient monasteries.

Bartholomew has been trying to cool tensions.

“It’s humane, and it’s democratic” to have different opinions, he said recently during a homily at the Russian-speaking Orthodox Church of St. Andrew in Istanbul. “But to cut the holy communion as a form of pressure and coercion in order to make others agree with one’s opinions is unacceptable. I’m certain that soon our sister Church of Russia will repent for this extreme decision.”

But Putin criticized Bartholomew at his annual news conference in December.

“Look how it (the new Ukrainian church) is becoming dependent on Turkey, the Turkish patriarchate,” Putin said to a group of 1,700 reporters. “I think Bartholomew’s main incentive and motive is to subdue this territory and then start profiting from it.”

Moscow and Bartholomew have locked horns before.

When the patriarch re-established the Orthodox Church of Estonia in 1996, after the country’s independence from the Soviet Union, the Russian Orthodox Church severed full communion with Istanbul for three months.

Experts said tensions would last much longer this time.

“I believe this is just the beginning of this conflict,” Kouskouvelis said. “But I don’t believe this is as serious yet to be considered a schism in the Orthodox world.”

Opinion
Mikhail Gorbachev’s tragic legacy in the Russian Orthodox Church
Follow us on Facebook!
Submit your photos to RNS