(RNS) — A new study finds devotees of the conspiracy theory movement known as QAnon number in the tens of millions, a sizable coalition that claims a number of white evangelicals but draws from other religious groups as well.

And while QAnon believers are vastly outnumbered by those who reject or doubt their claims, researchers say they represent a politically motivated worldview that diverges sharply from the views of other Americans when assessing current events, such as the Jan. 6 attack on the U.S. Capitol last year.

The study, compiled from a series of surveys conducted by the Public Religion Research Institute in 2021, gauged Americans’ attachment to QAnon, whose followers are often loyal to former President Donald Trump, by asking whether respondents agreed with three statements associated with the movement: 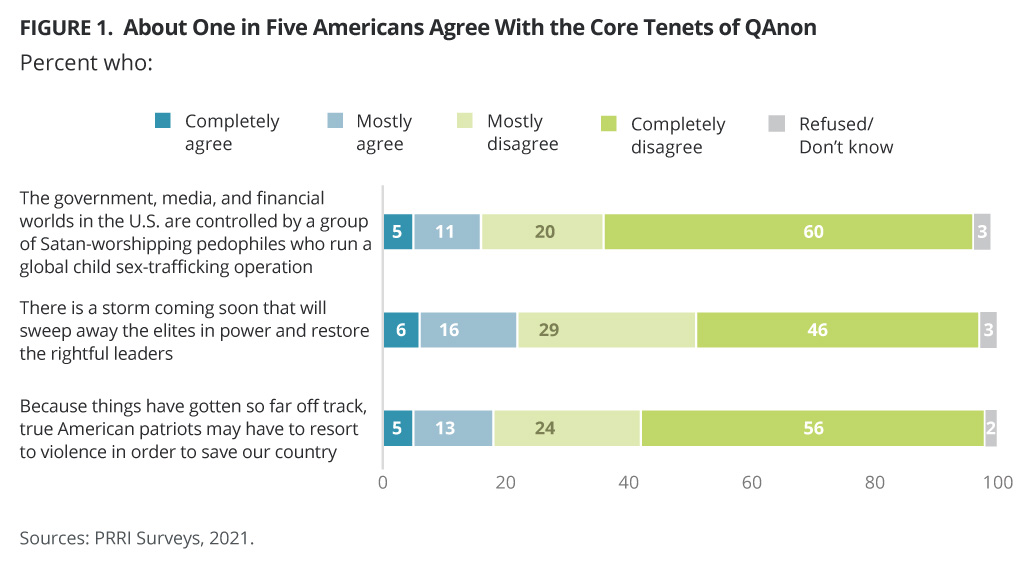 “Our surveys show that QAnon conspiracy theories are not losing popularity over time, despite their championed leader being out of power,” said Natalie Jackson, director of research at PRRI, in a press release. “While these believers are racially, religiously, and politically diverse, the unifying beliefs are that their way of life is under attack and that they might be willing to resort to violence to defend their vision of the country.”

QAnon has long been associated with a vocal subset of white evangelical Protestants, and the PRRI report found the largest chunk of QAnon devotees are indeed white evangelicals (20%). But the rest of the conspiracy theory-driven coalition represents a relatively diverse array of faith groups: Religiously unaffiliated Americans constitute 17% of QAnon believers, followed by white mainline (nonevangelical) Protestants (12%), white Catholics (12%), Hispanic Catholics (10%), Black Protestants (8%), Hispanic Protestants (6%) and other, non-Christian religions (6%). Members of other Christian denominations only make up a small sliver of the group (3%), along with other Protestants of color (3%) and other Catholics of color (2%).

Hispanic Protestants, a small but growing percentage of the population, were the most likely religious group to find QAnon believers in their ranks (27%). White evangelicals were next (23%), followed by Jehovah’s Witnesses (23%), Protestants of color (21%), Hispanic Catholics (18%), Black Protestants (17%), Latter-day Saints (17%), Buddhists (17%), other Catholics of color (15%), white Catholics (14%) and white mainline (nonevangelical) Protestants (14%).

The percentage of QAnon believers was much smaller among the religiously unaffiliated (11%), Unitarian Universalists (7%) and Jewish Americans (5%). Taken together, the group constitutes a coalition that differs greatly from other Americans when asked for opinions on recent events.

For example, believers in QAnon are the least likely group (18%) to blame white conservative Christians for the Jan. 6 insurrection at the US. Capitol, despite ample examples of conservative Christian religious expression during the attack. A report unveiled earlier this month by the Baptist Joint Committee for Religious Liberty and the Freedom From Religion Foundation found appeals to Christian nationalism especially prevalent in and around the Capitol attack, some of which was mixed with elements of QAnon.

Instead, QAnon believers tended to back a conspiracy theory about what happened that day: While law enforcement has repeatedly dismissed erroneous allegations that left-leaning antifascist groups, often referred to as antifa, were to blame for the insurrection, a majority (59%) of QAnon believers still accuse liberal activist organizations of inciting the riot.

Conversely, only 1 in 5 QAnon rejecters blame liberal or left-wing groups for the insurrection, while nearly half (45%) accuse white conservative Christian groups. Sizable majorities of rejecters — 78% and above — also lay blame before white supremacist groups, Trump and conservative media outlets that spread misinformation.

QAnon rejecters are also unlikely (21%) to say God has granted America a “special role in human history,” whereas majorities of QAnon doubters (53%) and QAnon believers (68%) agree with that assertion. Believers are also disproportionately more likely (72%) to say Islam is “at odds with American values and way of life.” Politically speaking, QAnon devotees tend to be Republicans (43%), with just over a quarter identifying as independents. Fewer than 1 in 5 are Democrats, and 12% belong to other political parties.

According to PRRI, QAnon believers are mostly white (58%), concentrated in the South (44%) and disproportionately likely to believe Trump is a “true patriot” (67%).

Flunking Sainthood
Mormon support for same-sex marriage has doubled in the last decade, survey shows
Follow us on Facebook!
Submit your photos to RNS