After news of Russia’s invasion of Ukraine spread, pagans and witches joined thousands of other faith leaders in praying for peace and for strength. Ballard, an Asheville-based witch and priestess, shared her personal prayer and a photo of her altar, welcoming others to join her in holding space for the Ukrainian people.

Her prayer continues: “Holding in our hearts the children, the elders, the soldiers called up and those left behind. The trees and brooks, the lambs, the calves—all held here in the folds of our ragged souls. To your fear, your peril, your rage and resistance, we stand witness. We stand with you and for you, your grief our grief. May Justice be served! May allies come swiftly! By this crescent Moon’s frail light, we stand.”

In her call to action, Ballard requested that those who join her in “energy work” focus on the Berehynia statue in Kyiv. The monument, standing in the city’s central square, was erected in 2001 as a symbol of Ukrainian independence. It depicts a woman holding up the Guelder Rose, another national symbol.

The statue, however, stands for more than just Ukraine’s political sovereignty, the reason Ballard specifically called attention to it.

Artist Anatoliy Kushch, inspired by Slavic mythology, based his female figure on Berehynia-Ornate, the mother of all living things and the goddess of home and family. In that way, the statue is as much a spiritual protector and guardian as a secular symbol of the country’s strength. 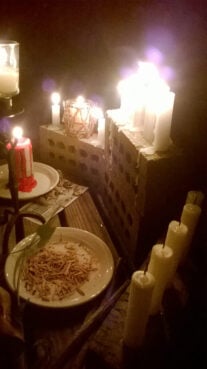 The altar of H. Byron Ballard during her prayer for Ukraine. Photo via Facebook/Byron Ballard

Ballard’s call to action was answered by hundreds of people, shared on Facebook alone over 700 times, by both pagans and non-pagans alike. One friend added her own “Catholic twist” calling for additional protection from both God and Mary.

Ballard wasn’t the only pagan calling for peace and calm. Across the country, pagans lit peace candles on their altars and asked their gods to protect the region’s people.

Author Najah Lightfoot called for an end to the violence, saying: “I send my prayers for strength and protection to all those in harm’s way. May this end swiftly. May those fighting for peace be strengthened.”

Popular witchcraft author Mat Auryn publicly shared his own prayer from a personal working, calling on Hekate to lend “protection and safety to Ukraine.”

Holli Emore, executive director of Cherry Hill Seminary in Columbia, South Carolina — which trains pagan clergy and chaplains — called for an end to the conflict in Ukraine.

“World leaders such as Russia should be leading with peace-building support rather than seeking territorial dominance,” Emore said in a statement. “We ask our wider pagan community to join us in supporting an immediate cease-fire and de-escalation.”

Independent calls for collective energy and spell work to promote peace are now popping up in a variety of online and offline witchcraft communities. The dates of such events vary.

Joining all these prayers from her home in Florida, pagan priestess Christian Wilson also expressed something that many in the U.S. are feeling — helplessness. She said, “I lift a prayer for the world because that is all I can do right now.”

RELATED: Omicron is taking a toll on pagans, who depend on conferences for community

Editors’ note: The prayer in paragraph 10 has been updated to “calling on Hekate.”