(RNS) — Ask a Christian to describe other Christians and the answers likely will be “giving,” “compassionate,” “loving” and “respectful.”

Ask a non-Christian, on the other hand, and the more likely descriptors you’ll get for Christians are “hypocritical,” “judgmental” and “self-righteous.”

Non-Christians are also far more likely to say Christians do not represent the teachings of Jesus.

Those are the results of a new survey conducted by the Episcopal Church, released Wednesday (March 9), that illustrates stark differences between how Christians and non-Christians view Christianity in the United States.

“There is a disconnect between the reality of Jesus and the perceived reality of Christians,” said Bishop Michael Curry, presiding bishop of the Episcopal Church.

The Episcopal Church, one of the largest mainline Protestant denominations in the U.S., conducted the survey of American adults with market research company Ipsos in part to identify those gaps, according to Curry.

The denomination also wanted to open a conversation and dialogue, the presiding bishop said. Christians need to learn to listen, he added.

“This was an attempt on our church’s part to actually listen to what others were saying about Jesus, about us. We dared to ask, ‘How are we perceived?’” Curry said.

Researchers narrowed in on the disconnect between how Christians perceive themselves and how non-Christians or people with no religious affiliation see them.

Strong majorities of evangelical Protestants (71%), mainline Protestants (59%), other Protestants (65%) and other Christians (61%) said they viewed Christians overall as compassionate, as did 46% of Catholics. However, only 15% of those who belong to other religions said the same, and the number was even lower among people who claim no religious affiliation (12%). 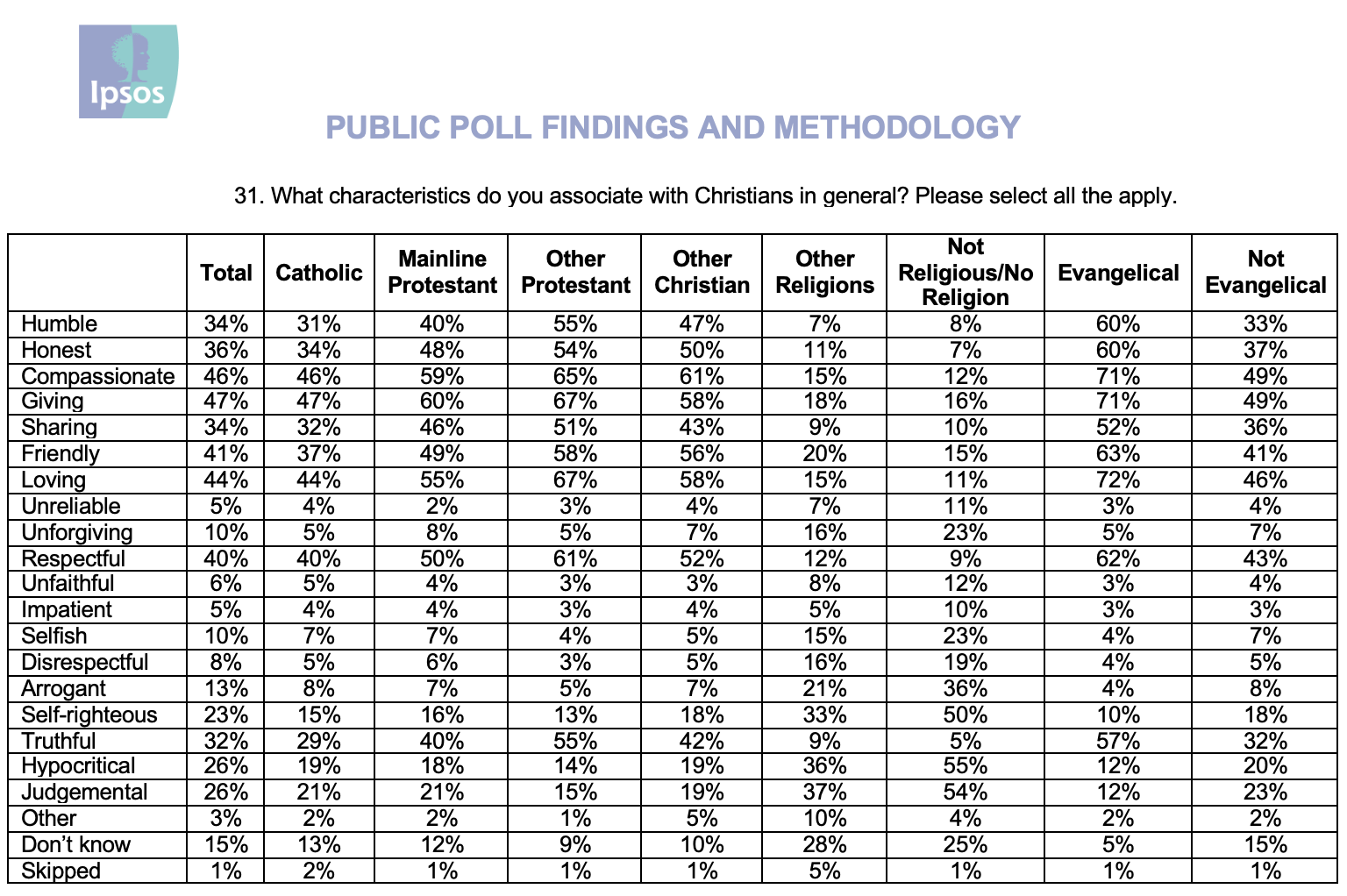 The ratio roughly flipped when respondents were asked if Christians were hypocritical: Most religiously unaffiliated Americans said yes (55%), whereas 20% or less of all Christian groups agreed. Evangelicals in particular were the least likely (12%) to describe Christians as hypocritical.

Curry pointed out that the question referred to Christians in general as opposed to asking about specific subgroups, noting most people aren’t generally aware of the differences between, say, evangelical and mainline Protestant Christians. Many non-Christians also may not be aware of the things average Christians are doing, such as volunteering in soup kitchens or serving in other ways, he noted.

But, he admitted, “We got some history.”

“We as Christians need to own that — that very often, we have been silent in the midst of unspeakable horrors when we should have spoken up.”

Christians have a long history of being on different sides of major moral issues, such as pastors who supported the institution of slavery and Christian abolitionists who fought to end it, he said.

The presiding bishop also noted that, whatever their views on Christianity, 84% of respondents overall saw Jesus as an “important spiritual figure.” That includes 50% of religiously unaffiliated respondents.

When asked how well Christians represent the values and teachings of Jesus, many religiously unaffiliated respondents said “not at all” (29%), while only 2% said Christians represent Jesus’ values and teachings “a lot.” The numbers were a bit less harsh among respondents of non-Christian religions, but still 18% said “not at all” and just 6% said “a lot.”

That feedback was hard to hear, Curry said. But, he added, “You can only begin the process of healing, when you have an accurate diagnosis.”

Closing the gap between people’s perceptions of Jesus and their perceptions of his followers will take a “new Reformation,” according to Curry — one that includes not only “re-presenting” a Christianity that he believes looks more like Jesus to the rest of the world, but also better formation of Christians around Jesus’ teachings and way of life.

”The church has got a lot more to do, which is a good thing,” he said.

The survey showed most people believe Jesus taught to love God (58%) and love one’s neighbor (64%), which they ranked among his most important teachings. Fewer believe he condemned materialism (20%), challenged unjust power structures (17%) or instructed people to pay taxes (15%). 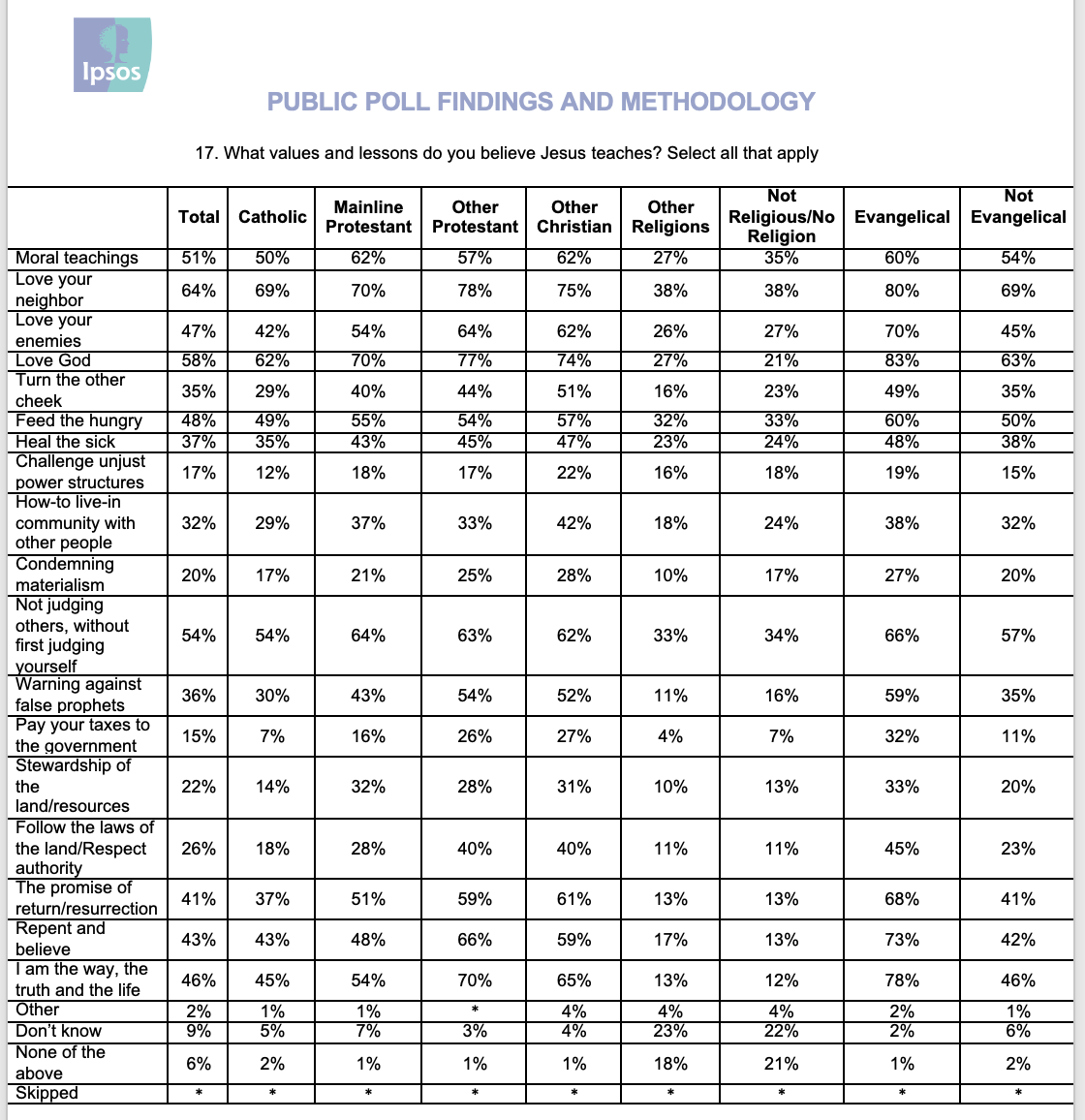 Christian respondents also were asked what messages they believed were most important to receive from religious institutions. The most popular answer (26% overall, including 45% of evangelicals and 22% of mainline Christians) was the message of Jesus as savior. Further down the list were messages like helping others in need (13%) and pursuing God’s justice and peace (6%).

Curry recalled the words of a former parishioner, who said that Christians love “Christmas Jesus” — the baby they believe to be the Son of God whose birth they celebrate at Christmastime.

“So let’s listen to the Sermon on the Mount Jesus: ‘Love your enemies.’ Let’s explore what that means.”

The Episcopal Church’s “Jesus in America” study surveyed 3,119 Americans adults in both English and Spanish between Nov. 22 and Dec. 2, 2021. The study has a margin of error of +/- 2.0 percentage points at the 95% confidence level, according to the denomination.