Known for its interreligious focus, the institution isn’t interested in replacing religious degree programs, but it does want to make its scholarship available to new audiences.

“What if we designed an online platform that functions as a conduit to deliver the wisdom and knowledge we have in our system already and give it to the public?” asked Uriah Kim, GTU’s president.

That’s the goal of GTUx, Graduate Theological Union’s new online learning hub for interreligious activism. Launched March 1, the website offers pre-recorded lectures and learning modules on topics such as religion at the Jan. 6 insurrection, rituals for mitigating eco-anxiety and the relationship between psychedelics and spirituality.

So far, the platform has gained more than 2,200 users who access offerings and pay what they want or look in for free. A trial run last year brought in more than 1,000 users in two months, and GTUx is currently adding about 200 new members per week, according to its developers.

Graduate Theological Union formed in 1962 as a way for several theology schools in California’s Bay Area to combine their resources and offer stronger programs. Kim said their latest project has been at least five years in the making.

“Millennials and Generation Z have really no need for church to create a social network, but they still desire spirituality and engaging with others on a metaphysical level and with the divine spiritually,” said Kim, who pointed to the well-documented rise of the religious “nones.”

“That’s where GTUx comes in. We want to reach out to these individuals who don’t need to go to church, but desire spirituality.” 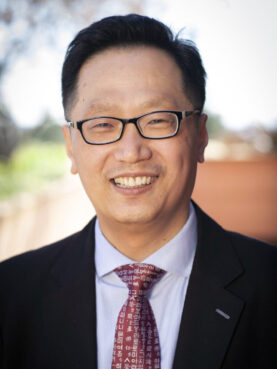 Kim also envisions GTUx as a way to share knowledge directly, instead of relying on a “trickle-down” education model in which their graduates bring knowledge to laypeople.

“What we do needs to have direct impact on individuals who are dealing with injustice and inequity at the ground level,” said Kim. “We realized, if we mean what we say, that we want to make a difference in this world, then we have to design a way to send our knowledge and wisdom to the ground level, where people are struggling to create a beloved community in their neighborhoods.”

Kim insists that GTUx is no substitute for an in-person, in-depth degree program. Instead, he said, the online platform is a supplement to the traditional model and eventually will support GTU’s existing programs by adding a new revenue source.

Schools of religion across the U.S. have been forced to adapt to the nation’s shifting religious landscape as interest in institutional religion wanes. In spring 2021, Pacific School of Religion, a GTU member, launched a six-week online cohort program for leaders interested in spirituality and justice. Last fall, Hartford International University in Connecticut added religious diversity trainings for professionals and executives. For Kim, these kinds of innovations are not just necessary — they’re also encouraging.

“This is not a negative thing,” said Kim. “I think it’s really an opportunity to reimagine and recreate theological education for the 21st century.” FROM THE ARCHIVES: More seminary students leave the Master of Divinity behind