(RNS) — The only cleric in the world to bless the Russian atrocities in Ukraine is Kirill, Patriarch of Moscow and all Rus’.

Or maybe just look at his watch. To give you an idea of who this FOP (Friend-of-Putin) is, consider the $30,000 Swiss Breguet watch he was spotted wearing in a 2012 photograph.

Breguet calls itself “one of the most prestigious brands in the world of luxury watches.” Kirill’s isn’t even their top of the line: The Breguet Classique Tourbillion Squelete 5395 Platinum goes for $240,600.

Of course, the patriarch claimed he did not know anything about the watch and had not worn it, despite photographs showing it on his left wrist. To support his denial, another photo turned up with the watch airbrushed out, but the reality re-do failed. The watch’s reflection still shone on a nearby well-polished table. 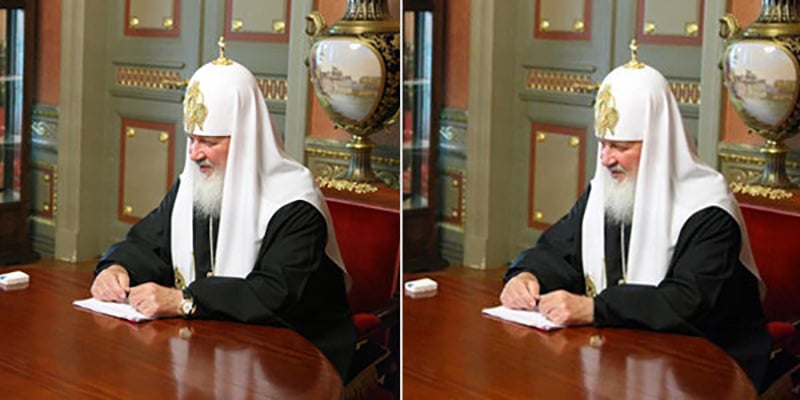 A Breguet watch on Patriarch Kirill, left, disappeared in a doctored photo, right. The reflection of the watch on the table remained. Photos via Press Service of the Patriarch

To be sure, Kirill plays with the big boys. He may even still own his apartment in Moscow’s prestigious House on the Embankment — home to pop stars, cultural figures and expatriates. It comprises some 500 apartments, along with theaters, restaurants, retail stores and an upscale supermarket. It once boasted a 26-foot-high Mercedes Benz logo on the roof. Nikita Khrushchev used to live there.

Preaching on March 9, Kirill implied the Ukrainians — encouraged by the United States — caused the war. “Sometimes,” he said, “conflicts are fomented by a third party interested in two people quarreling.”

Claiming that the conflict was all a certain brand of geopolitics aimed at weakening Russia, which he declared “is one country, one people,” the patriarch complained, “How terrible to set these people against their brothers! How terrible it is to arm them so that they enter into a struggle with their brothers of the same blood and of the same faith!”

To be sure, Kirill’s preferred brand of geopolitics — one he shares with Russian President Vladimir Putin — is geared toward reuniting the ancient Rus’ people of Russia, Belarus and Ukraine. Fellow Christians are criticizing what they see as a position no more in keeping with Kirill’s faith than his expensive watch. 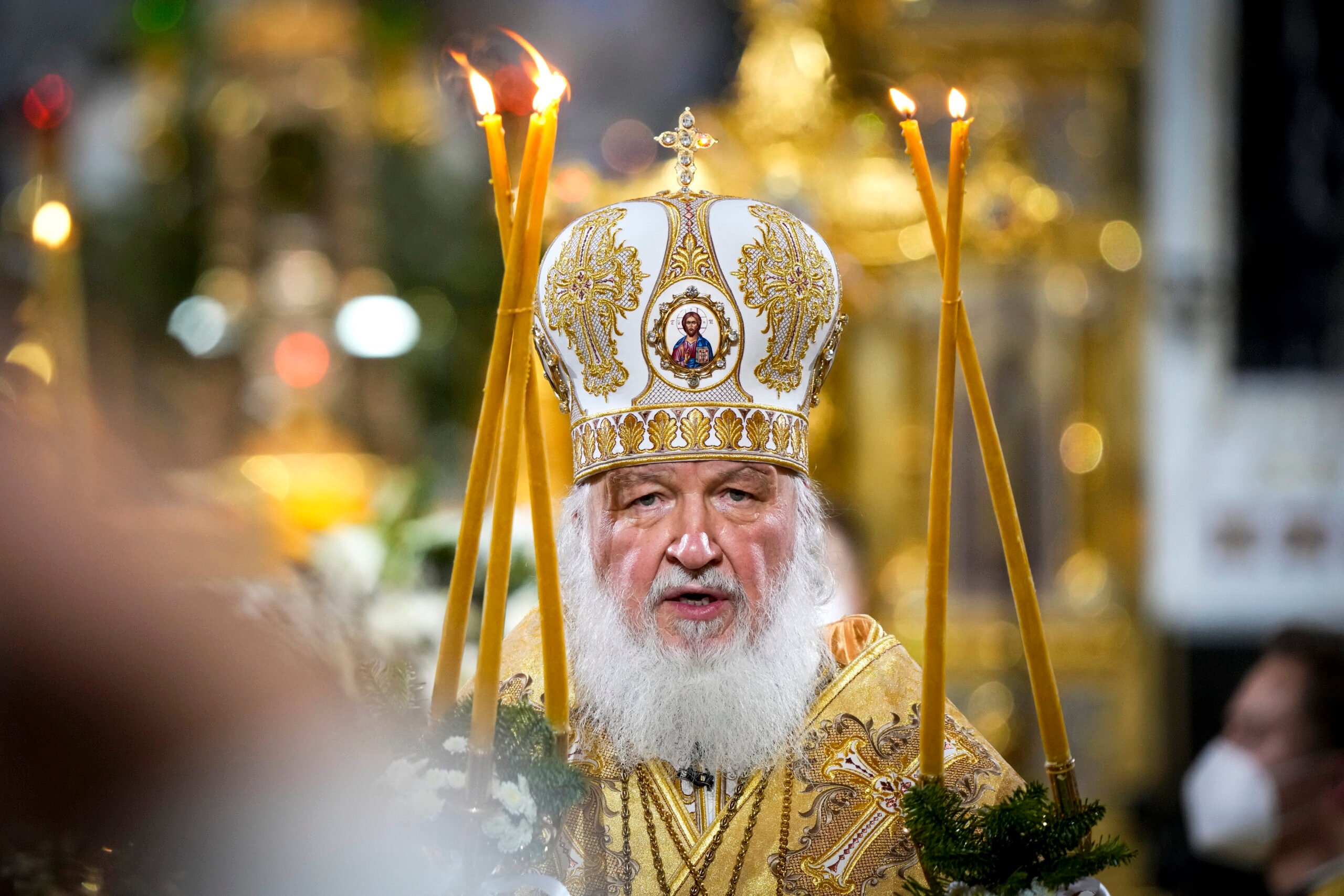 In a recent statement, the Rev. Christian Krieger, president of the Conference of European Churches, wrote, “The ideology pursued by the Russian president is fully reflected in some of Patriarch Kirill’s statements.” Krieger urged Kirill to condemn Russia’s invasion, an “aggression” he never would have imagined possible.

Pope Francis said the Ukraine situation is “not just a military operation, but a war which sows death, destruction and misery.” Lamenting the “rivers of blood and tears,” he dispatched two cardinals to the region to better understand the levels of humanitarian assistance needed.

Kirill sees himself as one of three great Christian leaders: himself, Orthodox Patriarch Bartholomew I of Constantinople and Pope Francis.

But it looks as if Kirill is losing his grip on his own spiritual power and authority as he faces an internal insurrection of his own making. Orthodox priests and deacons within Ukraine and elsewhere have condemned Kirill’s coziness with Putin’s aims and decry his attitude toward the invasion.

A letter signed by some 275 Russian Orthodox priests and deacons worldwide calls for “the cessation of the fratricidal war” and affirms the right of the people of Ukraine to their political self-determination.

They write against their own patriarch, who has called Putin’s leadership “a miracle of God” and asserts those opposing the Russian invasion comprise “evil forces.” On March 13, Kirill preached, “today, even the commemoration of the name of the patriarch in the temple for some becomes impossible for fear of the Jews (John 19:38).” 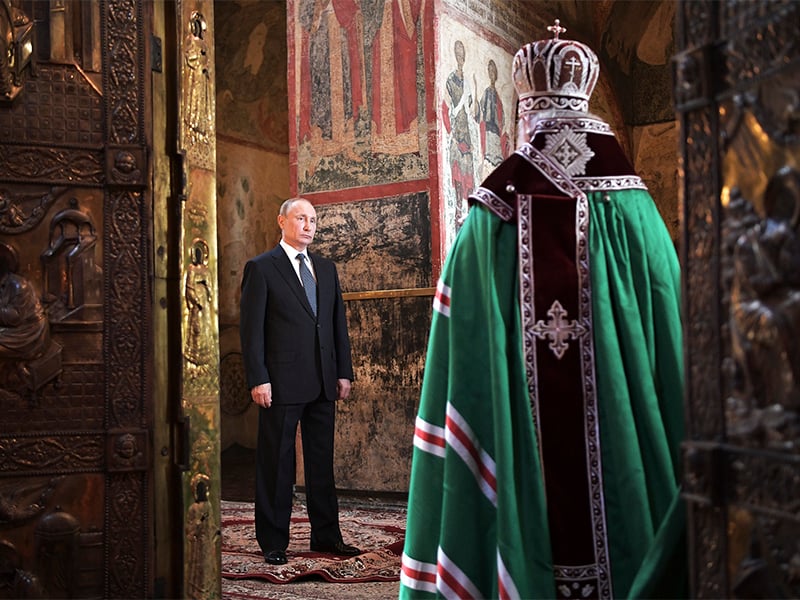 Russian President Vladimir Putin, left, attends a service held by Russian Orthodox Patriarch Krill, right, in the Annunciation Cathedral after the inauguration ceremony in the Kremlin in Moscow, Russia, on May 7, 2018. (Alexei Nikolsky, Sputnik, Kremlin Pool Photo via AP)

Kirill may be responding to a statement posted on Facebook, signed by some 28 priests and deacons, in which Ukrainian Metropolitan Archbishop Evlogy announced: “In this difficult situation, guided by the dictates of our pastoral conscience, we have decided to stop commemorating the Moscow Patriarch at divine services.”

“Our flock,” the statement explains, “no longer wants to hear the name of Patriarch Kirill in our churches.”

RELATED: With war in Ukraine, Pope Francis’ yearslong outreach to Kirill appears to be in ruins

Nor do the people of Ukraine, along with the rest of the world, want to hear Kirill’s name, inside or outside of church. Beset by Putin’s attack, they don’t have time to worry about Kirill’s fancy watch or an apartment in downtown Moscow. They reject his abject determination as a Friend-of-Putin to crush the Ukrainian spirit of freedom, in Ukraine and around the world.

If Kirill is trying to position himself as one of the world’s major religious leaders, someone needs to tell him it is not going to work.

(Phyllis Zagano is senior research associate-in-residence and adjunct professor of religion at Hofstra University. Her most recent book is Women: Icons of Christ. The views expressed in this commentary do not necessarily reflect those of Religion News Service.)