DOVER, Del. (AP) — A committee representing several Catholic entities in the Boy Scouts of America bankruptcy has reached a settlement with the BSA and is withdrawing its objections to its proposed reorganization plan, attorneys told a judge Friday.

The announcement came on the fifth day of a trial to determine whether the Delaware judge will approve the BSA’s reorganization plan.

Under the settlement, virtually every Roman Catholic entity nationwide, including parishes, schools, dioceses and archdioceses, that was involved with Scouting would be considered a “participating chartered organization” in the bankruptcy.

That would release them from liability for all Scouting-related child sex abuse claims against them from 1976 to the present, and for all pre-1976 claims subject to coverage by insurance companies that have reached their own settlements in the BSA bankruptcy. They also would be granted 12 months to negotiate financial contributions to a settlement fund for abuse victims in exchange for a full release from liability for all Scouting-related abuse claims.

In exchange, the Catholic entities would release their rights to any policies issued by the settling insurers.

Attorneys for the Catholic committee had previously argued that the BSA’s plan treated chartered troop-sponsoring organizations such as churches and civic groups unfairly, leaving them exposed to future lawsuits while stripping them of their rights under BSA insurance policies.

“With this agreement in place, we have even greater consensus as we progress toward confirmation,” the Boy Scouts said in a statement.

Under the settlement, members of a committee representing 10 Catholic dioceses and archdioceses and the Catholic Mutual Relief Society of America — a church-affiliated nonprofit that insures hundreds of dioceses, religious orders and institutions — also agreed to work with the Boy Scouts through at least 2036 to improve and support Scouting. The agreement includes recommending that dioceses support Scouting as part of their youth ministries and cooperate with local Boy Scouts councils in establishing new units.

Those provisions could prove critical for the Boy Scouts after decades of steady membership drops. Its current membership is equal to 1938 levels.

The Boy Scouts, based in Irving, Texas, sought bankruptcy protection in February 2020 in an effort to halt hundreds of individual lawsuits and create a fund for men who say they were sexually abused as children involved in Scouting. Although the organization faced 275 lawsuits at the time, it found itself the subject of more than 82,000 sexual abuse claims in the bankruptcy case.

The reorganization plan calls for the Boys Scouts and its 250 local councils to contribute up to $786 million in cash and property and assign certain insurance rights to a fund for abuse claimants. In return, they would be released from further liability.

The BSA’s two largest insurers, Century Indemnity Co. and The Hartford, would contribute $800 million and $787 million, respectively, while other insurers have agreed to contribute about $69 million. The organization’s former largest troop sponsor, the Church of Jesus Christ of Latter-day Saints, commonly known as the Mormon church, would contribute $250 million for abuse claims involving the church. Congregations affiliated with the United Methodist Church have agreed to contribute $30 million.

The troop-sponsoring organizations and settling insurers also would be released from further liability in exchange for their contributions to the fund.

Bishop John Schol, a United Methodist leader who oversees eastern Pennsylvania and New Jersey for the denomination and has been involved in the bankruptcy negotiations, became emotional Friday when testifying about the Methodist settlement.

Schol said the Methodists’ goals included acknowledging and understanding the harm that abuse survivors have suffered, ensuring that their voices were heard, implementing policies to prevent future abuse and providing compensation.

“We are sorry for what has happened to survivors throughout this time, and even this process,” he said.

“We always wanted to make sure that the survivors were not a number,” Schol added as his voice began to break, “but that they were human beings, and that we would do everything we could to maintain the dignify of the survivors.”

Asked whether he thought the $30 million settlement was fair, Schol said there was nothing anybody could do for the survivors to make it fair. “All I can say is that we’ve done our best to work toward a just resolution,” he said.

All told, the compensation fund would total more than $2.6 billion, which would be the largest aggregate sexual abuse settlement in U.S. history. The average recovery per claimant, however, would be significantly less than in other settlements of sex abuse scandals involving large numbers of victims.

The BSA’s plan stills faces objections from several nonsettling insurance companies, as well as the U.S. bankruptcy trustee, who acts as a watchdog in such cases to ensure compliance with bankruptcy laws. 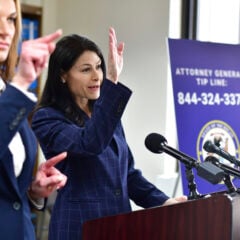