(RNS) — A group of rabbis visiting the Polish border this week got to experience the Passover story up close and personal.

On a tour of the town of Przemyśl, which sits on the Polish border with Ukraine, they saw women and children, worn out and weary, carrying only one piece of luggage and crossing the road on foot into an unknown future.

“I’ve been a rabbi for 30 years and I’ve seen death, pain and tragedy,” said Rabbi Steve Engel of Orlando, Florida’s Congregation of Reform Judaism in a phone conversation. “This was one of the saddest things I’ve ever seen.”

Each year, Jewish families gather at the Passover Seder table — this year on Friday (April 15) — to tell the biblical story of their liberation from slavery in Egypt. In Poland, the group of 30 rabbis saw a modern-day example of what it’s like to flee from a pharaoh they called Putin into a land that may not be promised, but will provide a measure of safety.

The delegation of mostly U.S. rabbis, with some from Israel and Europe, arrived in Krakow on Sunday. They visited with city leaders and toured the city’s Jewish Community Center. They learned that the city, Poland’s second largest with about 750,000 people, has taken in about 150,000 Ukrainian refugees since Russia launched its invasion on Feb. 24. Then the rabbis took a ride to the border with Ukraine, about 150 miles away.

The number of refugees flooding Poland has slowed in recent days, and some are even attempting to go back to check on family members left behind, the rabbis said. But Poland is bracing for a new influx once the fighting in eastern Ukraine resumes. Convoys of Russian military vehicles are repositioning in eastern Ukraine, according to news reports, and on Tuesday Russian President Vladimir Putin vowed he “will not stop military operations.”

RELATED: Interfaith leaders gather in Ukraine to appeal for peace

Relief organizations and other nonprofits have stepped into what may be the largest humanitarian crisis Europe has seen in decades. The United Nations is preparing for up to 7 million internally displaced persons and as many as 7 million refugees, according to a European Union commissioner. Poland will likely admit more refugees than any other country.

On Tuesday, the group of rabbis boarded a bus that took them from Krakow to the border, a two-hour drive. They saw refugees — invariably women and children, since men of military age aren’t allowed to leave Ukraine — cross the road into Poland. There, nongovernmental organizations set up tents to greet and register them and to offer food, cellphone cards, physical checkups and psychological services. The Poles have also taken over several empty big-box stores to provide shelter and supplies. Then the rabbis visited a hotel near the border where the Krakow Jewish Center and the UJA Federation of New York sponsored a mock Seder meal. Nonprofit volunteers and refugees sat around tables as various rabbis, speaking a mixture of Hebrew, English, Russian and Ukrainian, led the service.

Rabbi Andy Koren of Temple Emanuel in Greensboro, North Carolina, said he kept turning over in his head the key verse from the Haggadah, the Passover liturgy: “You shall tell your child on that day.”

That’s what he intends to convey to his 600-family congregation back home.

To make it real, he said he’ll ask his congregants to leave an empty chair and a table setting at the Seder table, just as Jews used to do during the Soviet Jewry movement, he said, referring to the campaign begun in the 1970s to pressure the Soviet Union to allow Jews to emigrate. 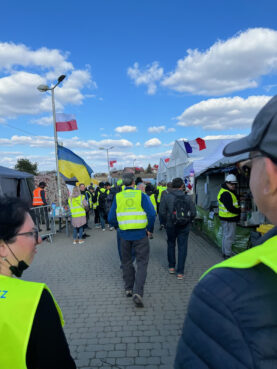 “This is a part of the world that should not be forgotten,” Koren said. “Keep that empty chair there. Keep telling the story.”

The rabbis’ trip and the assistance they brought was centered on helping Krakow’s Jewish Center, which has been helping refugees regardless of their religion.

The rabbis reported that people lined up around the block of the Jewish Center each day for a host of services, including food, clothing, medicine, child care, and financial and mental health assistance. The center, founded in 2008, has become a hub for aid and funding into Ukraine.

“Personally, when this is all over, I want to be able to look in the mirror and say that me and my organization did everything we could to help Ukrainians,” the center’s executive director, Jonathan Ornstein, a former New Yorker, told The New York Times.

American Jews have been eager to contribute to those efforts, both because many trace their ancestors to Ukraine or Russia and because many see in Ukraine President Volodymyr Zelenskyy a modern Jewish hero engaged in a battle with a repressive, totalitarian leader.

The rabbis in the delegation raised about $600,000 from their congregations back home and also lugged 2 tons of supplies they packed into duffel bags. Engel, for one, was able to get AdventHealth in Orlando to donate about $400,000 in medicines, including drugs for people with diabetes, thyroid disorders and anxiety, in addition to antibiotics.

For Engel, the trip was an opportunity to act on the Passover message and fight for the liberation of those who are oppressed.

“As a Jewish person, knowing our history of being refugees and knowing that during the Holocaust people stood still and didn’t do anything, we have to make a statement that that will never happen again. We can’t sit still. We have to act.”

RELATED: An American rabbi went to help Ukrainian refugees. But he hoped to find his cousins.