(RNS) — When Rabbi David Wilfond was asked last month to join 18 other New York area rabbis on a mission to Poland’s border with Ukraine, he jumped at the opportunity.

Wilfond, the rabbi of Temple Shaaray Tefila, a Reform synagogue in Westchester County, was eager to deliver vital supplies to refugees fleeing war-torn Ukraine. But he had another goal, however farfetched: He dreamed of seeing his Ukrainian cousins from Kyiv.

It would take a miracle, he realized, given that he would be in Poland just two nights (March 13-15) and that by then 3 million Ukrainians had fled their country, with millions more internally displaced. Just in case, he bought sweets and vitamins and other essentials, in the unlikely event they would meet.

Wilfond first learned of his cousins’ existence in the late 1990s, when he served as a rabbi in Kyiv. During a visit to another synagogue, a congregant told him of a family with the same extremely rare name.

RELATED: A strike near Babyn Yar; but this time Jewish acceptance in Ukraine is growing

“We thought everyone had died in the Holocaust,” Wilfond said, recalling that moment, so learning that part of the family had survived was an unexpected blessing.

“When I called the family on the phone a then-92-year-old woman named Malka Vilfand (as the surname is spelled in Ukraine) invited me to come and meet four generations of my family,” Wilfond said. “Her husband, who had already died, grew up in the same shtetl as my grandfather.”

For the past 25 years, after moving to Israel and eventually back to the U.S., Wilfond has kept in touch with the Kyiv Vilfands, mainly on Facebook.

When it looked like Russia might attack Ukraine, Wilfond and his cousins — Natalia Vilfand, a psychotherapist, and Yurii Vilfand, an engineer — started to message each other every day. After Russia started to bomb residential neighborhoods in Kyiv, nine members of the Vilfands’ extended family were forced to flee the city.

“I knew that finding them would be like finding a needle in a haystack,” Wilfond said.

Natalia and Yurii Vilfand, meanwhile, were among those millions of refugees. They had been frantically seeking safety since Feb. 24, three days after the start of the war. Natalia was at home in her Kyiv apartment with her 12-year-old daughter, Karina, and 24-year-old son, Maks.

“I woke up around 5 a.m. from unusual and frightening sounds. I was shaking with fear,” Natalia said in an interview conducted in Russian over Messenger. Her son’s girlfriend, Tanya, learned from her father, a diplomat, that war had begun. “Each of us grabbed a suitcase and began to pack our things. We had to be together. We had to drive together with my mother-in-law, who was recovering from a stroke,” Natalia said.

Natalia, Yurii and Karina drove to the Kyiv surburb of Vorzel in one car, believing it would be safe. Maks and his girlfriend’s family did the same in another car.

A drive that should have taken 30 minutes took the family seven hours. When they arrived, they found the bombings followed them. The house where they sheltered had two basements, each roughly 6-by-6-feet and reachable only via a removable iron ladder.

“The most terrible and difficult part was lowering my mother-in-law, a sick woman, into this small space. We threw blankets on a wood pallet to make a bed. When the explosions stopped for a while, we climbed up the vertical ladder. Using the bed sheets, we carried up my mother-in-law. There were explosions night and day.”

When a shell exploded close to the house, Yurii quickly collected his mother’s things, took her in his arms and carried her to the car.

They fled again, this time to Rovno, a 12-hour car ride away, and sheltered there for 10 days. When it was clear the war would continue, they slowly made their way to the Polish border.

In Rovno, Maks and Tanya got married.

At the Ukraine-Poland border, the women said a heart-wrenching goodbye to Yurii and Maks, who, like all men aged 18 to 60, are considered of draft age and are forbidden to leave Ukraine.

“My son and husband are in Ukraine. We miss them. We don’t know when we will see them next. We miss them so much. It’s hard to be so far away from each other. It’s hard for me to see the tears and sadness in my daughter’s eyes,” Natalia said.

As soon as they crossed into Poland, the women, who now included Tanya’s mother, grandmother and sister, plus a dog named York, were welcomed by humanitarian aid workers. They were sent to a hotel in Warsaw before Natalia, Karina and Yurii’s mother received the necessary documents to fly to Israel. Tanya joined them two weeks later. 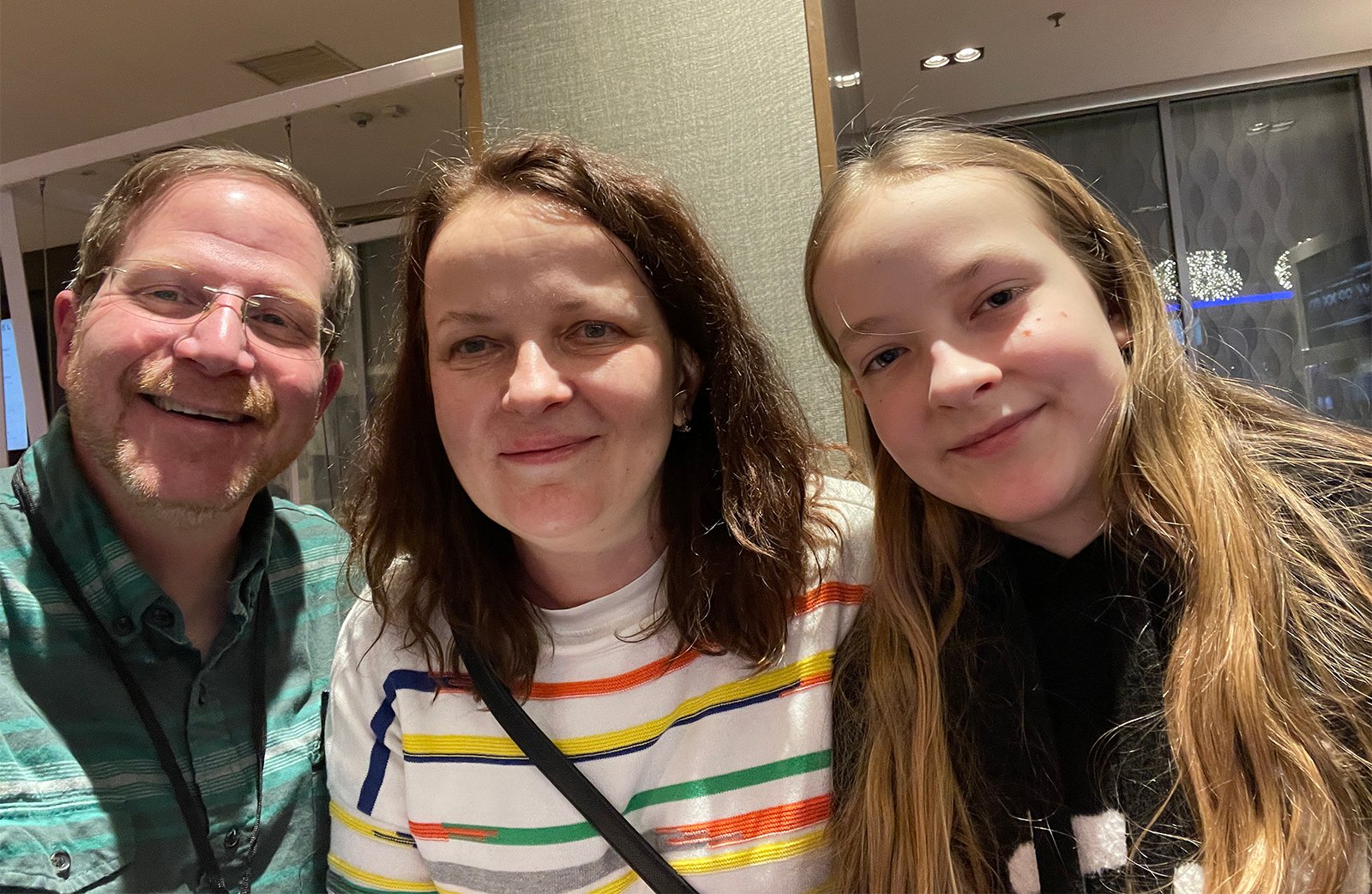 Wilfond says he’ll never forget the message he received from Natalia his second day in Poland.

“We’re texting and Natalia told me she and the other women had made it to Poland and would be sent to the Novotel.” When Wilfond got the text, he was in the Novotel, where the Jewish Agency refugee center had been set up.

The women arrived at the Novotel late Sunday night, and Wilfond met them in a tearful reunion the next day.

“It’s miraculous that we met,” said Natalia. “I was overjoyed that this journey brought me to one of my relatives.”

She is grateful for the gifts her American cousin brought from New York.

“I gratefully accepted all of the gifts,” Natalia said. “I felt upset that I wasn’t able to give them gifts in return. I hope to, the next time we see each other. I hope that we will see each other again.”

Natalia, who was flown to Israel on March 18, is still somewhat shell-shocked. Despite her trauma and not speaking any Hebrew and little English, she has managed to rent an apartment and has begun offering online psychotherapy sessions to other traumatized Ukrainian refugees.

Karina, who was bubbly and talkative before the war but who became withdrawn and cried frequently after it started, has begun to recover since moving to Israel.

“She’s going to school now and people are so helpful. We’re going to be all right,” Natalia said.