(RNS) — Days after Russian troops invaded Ukraine, leaders of the Chemin Neuf Catholic Community outside Warsaw, Poland, got a call asking if it could take in a group of Ukrainian refugees.

The call came from a bus driver whose route usually took him between Warsaw and the Polish village of Mistow. But on that day he’d driven about 200 miles to Poland’s border with Ukraine, where nearly 2 million Ukrainians have arrived in recent weeks seeking safety from Russian attacks.

He had a bus full of Ukrainian women and children, he told the leaders of Chemin Neuf, and he wasn’t sure where else to go.

“For us it was really the Lord’s call to care for the least of these,” said the Rev. Marcin Borządek, who pastors Our Lady of Fatima, the small parish church the community leads in Mistow.

In a text message to Religion News Service, Borządek pointed to Jesus’ words in the Gospel of Matthew: “Truly I tell you, whatever you did for one of the least of these brothers and sisters of mine, you did for me.”

Since then, the Chemin Neuf Catholic Community has grown from one priest and two Catholic sisters to a household of 30, including 12 women and 15 children between the ages of 2 months and 15 years old.

Altogether the community house has sheltered as many as 50 people in the last few weeks, the priest said — Orthodox and Baptist, mothers and grandmothers whose husbands have stayed to fight, frightened children who arrived on a bus at 4 a.m. after 30 hours of travel.

The first child who came to them, Borządek said, was shoeless and offered him a piece of chocolate. He wept when he saw her.

The most recent joined them last week — a 15-year-old girl who is five months’ pregnant.

More than 3 million people total have fled the war in Ukraine into neighboring countries, according to the United Nations’ refugee agency, pouring over the borders of Poland, Romania, Moldova, Hungary and Slovakia. Many more need humanitarian assistance or have been displaced within Ukraine. 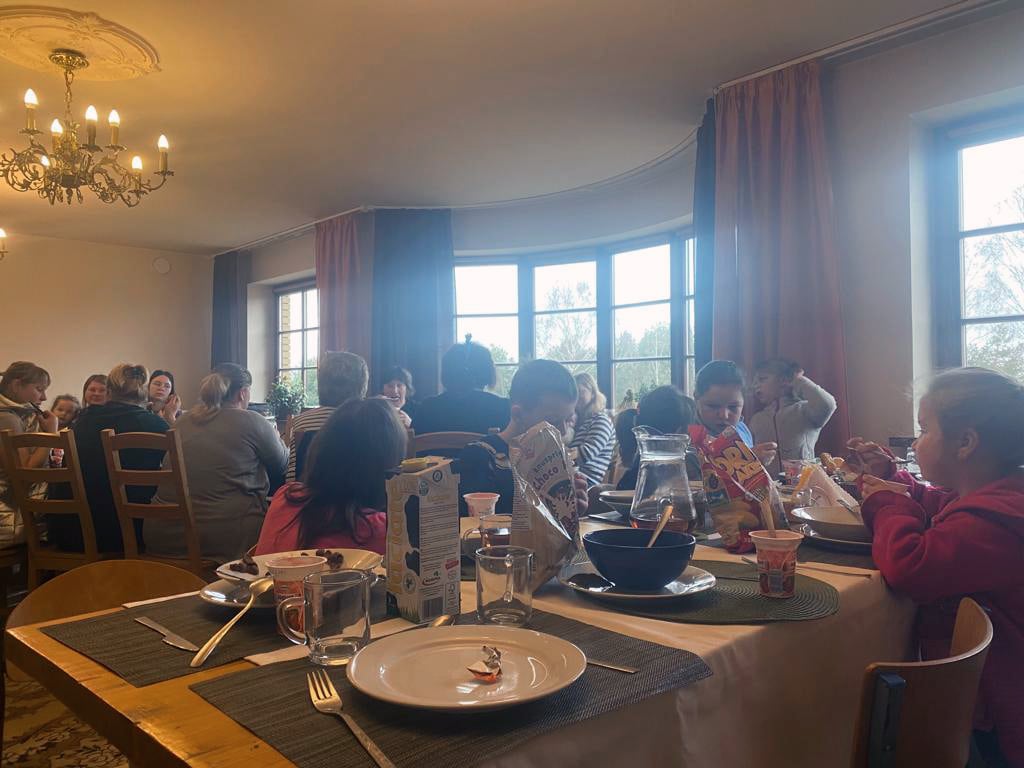 Ukrainian refugees share a meal at the the Chemin Neuf Catholic Community in Mistow, Poland. Photo courtesy of the Rev. Marcin Borządek

Krish O’Mara Vignarajah, head of Lutheran Immigration and Refugee Service, described it as the “fastest growing refugee crisis in Europe since World War 2.”

Refugee resettlement agencies in the United States — many of them faith-based, like LIRS — are reaching out to help partners working in Ukraine and its neighboring countries. They’re also working to resettle Ukrainians who already had applied to reconnect with family in the U.S. under existing laws.

On Thursday (March 24), agency leaders applauded news the U.S. is expected to welcome up to 10,000 Ukrainians.

“We commend the Biden administration for its plan to protect Ukrainians seeking safety, the overwhelming majority of whom are women and children,” Vignarajah said in a written statement.

“While many may wish to remain close to Ukraine, the sheer scale of displacement requires a coordinated global effort in which every able country pulls its weight. Welcoming 100,000 Ukrainians would be an important recognition that the United States must play both a supporting and leading role in providing refuge.”

LIRS has urged the U.S. to speed up efforts to rebuild its refugee resettlement system after years of cuts made by former President Donald Trump. That work already has begun: President Joe Biden has directed the U.S. to resettle as many as 125,000 refugees in the current fiscal year, though it had only resettled about 6,500 between November 2021 and the end of February 2022.

It also has recommended the U.S. expedite the process for Ukrainians who have applied for reunification with family through an existing program under the Lautenberg Amendment. Let them to come to the U.S. first, Vignarajah said, then finish their processing.

Other possible measures include extending protections to Ukrainian students, similar to the temporary protected status it recently granted to other Ukrainians living in the U.S., or granting Ukrainians asylum or humanitarian parole, as it did Afghans fleeing the Taliban takeover of their country.

The Biden administration reportedly plans to use “the full range of legal pathways” to bring Ukrainians to the U.S. That includes the refugee resettlement program, family-based visas and humanitarian parole.

“As we await further details on the plan’s implementation, resettlement organizations like ours are preparing to welcome Ukrainians with open arms. Buoyed by the incredible generosity of Americans across the country, we are confident that we can rise to the occasion and provide safe haven and support for these children and families,” Vignarajah said.

Some faith-based refugee resettlement agencies noted last year that the support they had seen for Afghan evacuees was unprecedented. They’re seeing a similar outpouring now for Ukrainians.

Church World Service has received offers to volunteer, to donate needed items or to host Ukrainian refugees — “things that are very well intentioned and not necessarily possible immediately,” according to Katherine Rehberg, its vice president of programs.

Ukrainians were already one of the top groups resettled in the U.S. during the Trump administration, as the former president changed criteria for refugees coming to the country, largely blocking Muslim refugees.

Many came through the Lautenberg program, first created under the sponsorship of New Jersey Sen. Frank Lautenberg at the end of the Cold War, to help resettle Jews fleeing the Soviet Union. The program allows individuals legally residing in the U.S. to bring family members belonging to religious minorities to the country. In Ukraine, which is largely Orthodox, that includes Pentecostals, Baptists and evangelicals.

Church World Service recently sent staff to meet with its partners in Romania and Moldova to get a better sense of how CWS can help, she said. It also is preparing to share the lessons it’s learned from years of community sponsorship in the U.S. with communities in Europe to help them support arriving Ukrainians.

World Relief is also responding through partners inside Ukraine to deliver food and other aid to people who have no humanitarian corridors to leave the country. 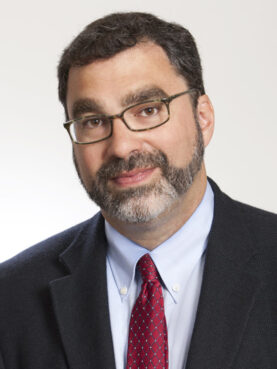 So is HIAS, founded more than 120 years ago (as the Hebrew Immigrant Aid Society) specifically to help Jews fleeing persecution in Russia.

In 2000, HIAS opened an office in Kyiv to help Jews flee anti-Semitism and discrimination in Ukraine, said HIAS President Mark Hetfield in a recent web presentation.

By 2014, HIAS Ukraine had grown to more than 150 staff members across the country and become Right to Protection, an independent agency that maintains close ties with HIAS, Hetfield said. Now, HIAS is sending funds through the group to help people in western Ukraine, relocate its office in Lviv and potentially open a new site in Chernivtsi.

“There is some beauty here, and that is when HIAS started in Ukraine and we opened up our office in 2000, we were helping Jews who were fleeing Ukraine as Jews,” Hetfield said.

In Poland, Borządek said he and Sisters Edyta Klejn and Joanna Pruszkowska were gripped by horror, sadness, fear and helplessness watching what was happening just over the border in Ukraine.

The Chemin Neuf Catholic Community is an international group that brings together lay and consecrated people of all Christian denominations, according to its website. Members are used to working across languages and cultures.

So the community in Mistow didn’t hesitate when it was asked to take in Ukrainian refugees, Borządek said. Ukrainian refugees staying at the the Chemin Neuf Catholic Community in Mistow, Poland, pose together. Photo courtesy of the Rev. Marcin Borządek

“It was enough to say ‘yes’ and open the door, and miracles began to happen! We are inundated with a wave of human kindness and generosity,” he said in a text message.

Friends he made while living in the U.S. sent money to help pay the cost of housing the refugees.

Parishioners filled three refrigerators with food. They brought bedding, clothes and personal hygiene products. Two teachers come every day to play with the children, and the community is working with a local school to organize education for them. They even arranged a “fun day” on a farm for the children and their mothers, who returned “with big smiles on their faces,” Borządek said.

The Ukrainian women have thrown themselves into community life — cooking, cleaning, sorting donations and traveling to the border to pick up more refugees. Many want to work, and the community is looking for opportunities for them, according to the priest.

“The Lord sent us not refugees, He really sent us sisters! Jesus knows that we don’t have the strength … so He sent us Sisters who really want to join our life together,” he said.

Other parish priests since have reached out to the community, asking how they can welcome refugees, Borządek said. He’s heard from some people, too, who left Christianity long ago but have been moved by the community’s response.

“We don’t know the future, we don’t know how long the war will last, how long our home community will be enlarged, be international and ecumenical (presently we host Orthodox and Baptists) and for how long the supplies will last, but we do take one day at a time,” he said.

“We trust in the Providence of the Lord! And we are so grateful to everyone who already helped us in so many ways!”