(RNS) — Photographer Ghila Krajzman has learned that sometimes the only way to get the shot she needs is to hand over her camera. In her more than a decade of shooting gender-segregated weddings, baby showers and bar and bat mitzvah celebrations for New York’s Orthodox Jewish families, Krajzman feels she has gained the community’s trust — especially, of course, when she’s working the women’s side of such milestone events.

Things can be different on the men’s side.

“They don’t like that I am the one shooting on their side,” Krajzman, who identifies as a secular Jew but honors the common Orthodox Jewish practice of avoiding contact with members of the opposite sex who aren’t family.

Sometimes, she has resorted to asking the groom’s sister to take a photo because a male relative of the groom was not comfortable with Krajzman’s presence. At another wedding, the shoot went fine, but when it came time for her to get paid, the father of the bride simply left a stack of cash on a table to avoid the possibility of physical contact.

RELATED: In Africa, hijab is no barrier to success in beauty pageants

Florists, caterers and other wedding professionals have the luxury of keeping their distance or setting up long beforehand. But capturing a wedding’s special moments through the camera lens can be a challenge in Orthodox Jewish, Muslim and other faith communities where strolling over to the opposite gender side to get a shot is a religious violation.

Avi Kugielsky, an Orthodox Jewish photographer in New York who documents Hasidic life in America, has also worked as a photographer at gender-segregated events. Having grown up in the Orthodox community, he understands the nuances of navigating the norms. According to Kugielsky, different communities have differing levels of strictness.

“In Judaism, the separation from man and women is a very strong defined aspect of religion,” Kugielsky said, and he tries to observe the modesty rules while capturing as much as he can. 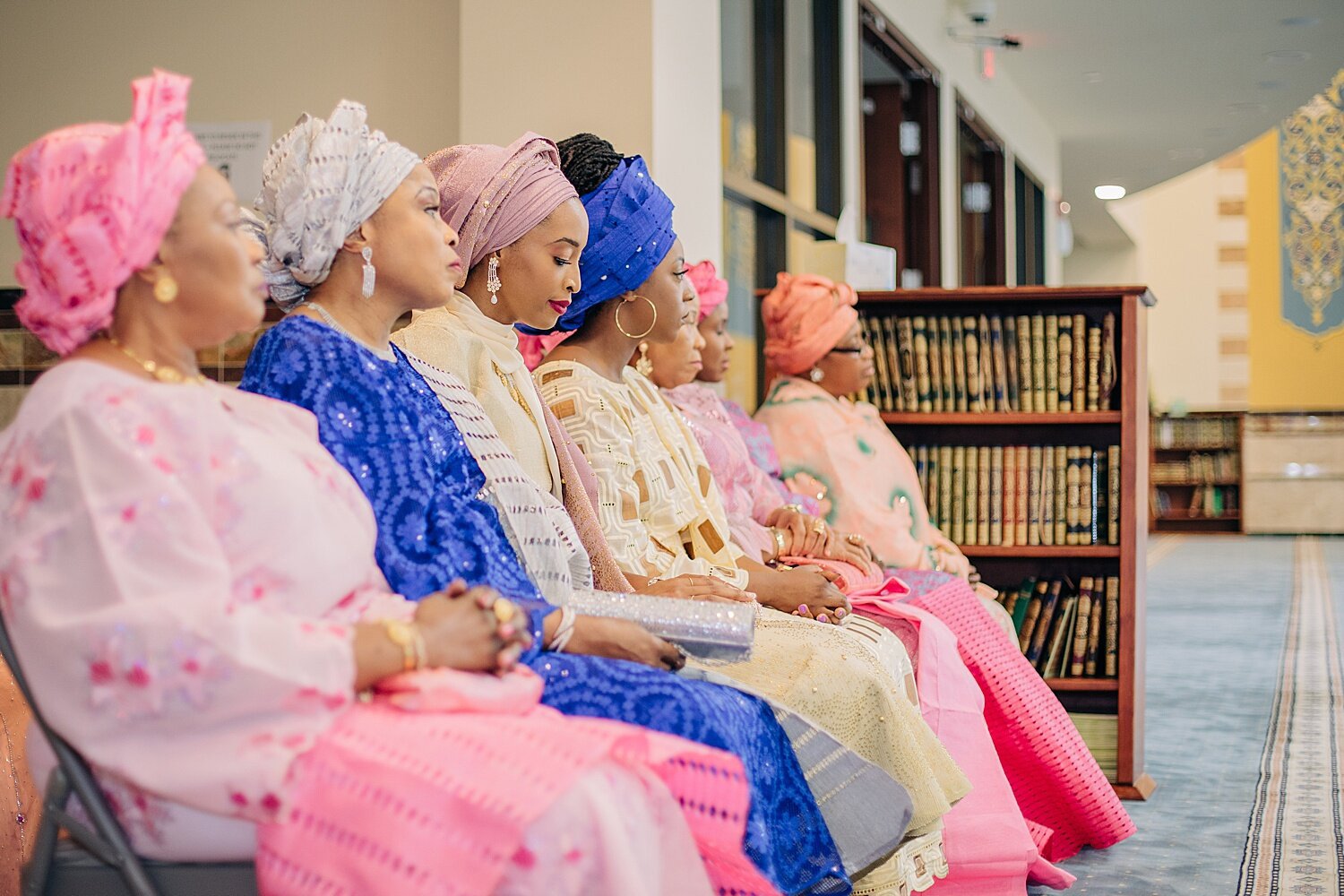 A bride and women sit together during a 2019 Muslim Nikkah, or wedding, at the Mecca Center in Willowbrook, Illinois. Photo by Fariha Wajid Photography

Fariha Wajid, a photographer in the Chicago area, said she feels her mission at gender-segregated Muslim weddings is to be there for the bride. Women in many Muslim communities have few opportunities to “get decked out, especially when they are hijabi,” she said.

For one bride who observed the hijab but wanted an outdoor photo session at her wedding, which would have exposed her to the eyes of everyone who attended, male and female, Wajid scouted the banquet venue ahead of time to find a secluded spot and made arrangements that shielded the bride from the public’s view.

But Wajid admits that at many gender-separate events, especially weddings, the special moments that include male relatives are given shorter shrift. There is the feeling, she said, that there are fewer moments to capture among the men, and even when the groom appears on the bride’s side of the divided hall “everything is rushed and everyone tries to squeeze everything in,” Wajid said.

Often, couples whose weddings are divided by gender simply end up with fewer photos, photographers say. 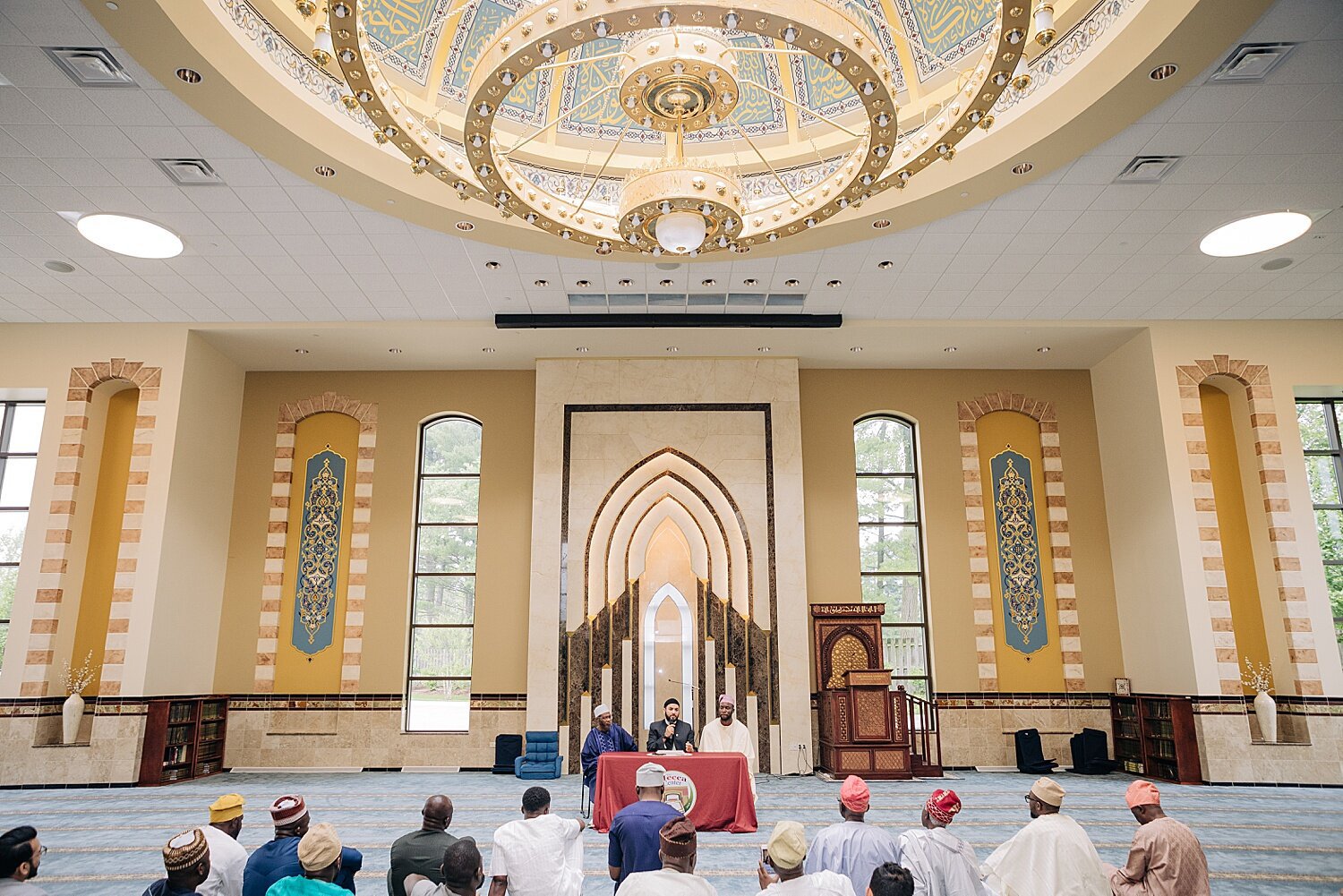 Males attending a 2019 Muslim Nikkah, or wedding, at the Mecca Center in Willowbrook, Illinois. Photo by Fariha Wajid Photography

Some photographers get around the difficulties of a gender-segregated ceremony by hiring a photographer of the opposite sex. That way, said Isaq Hameed, a male photographer in Chicago, “the only time I do go on the female side is if I need to give any specific instructions to my subordinate or when the groom goes on to the female side for photos.”

But this approach isn’t without its challenges. “Good communication between the two photographers is important to ensure the quality and standard of the content that is being captured is well-maintained,” said Hameed. But “from a creative perspective,” he adds, “there is not much freedom in such events to capture the vision I have, so I try to keep it pretty straightforward.” But photographing men and women separately can have its advantages. Kiki Khan, a photographer in Bartlett, Illinois, specializes in baby pictures and family photos. While she doesn’t advertise as a gender-separate photographer, she is familiar with the modesty rules and is happy to accommodate religious families who want two sets of shots, one with each gender.

“Separate shoots are a great way for each parent to bond with the child,” she said. “It makes the kids feel as though something is being done just for them and the parent has taken the time out to hang out with them specifically.”