WASHINGTON (RNS) — A conservative Catholic activist is calling for Georgia Republican Rep. Marjorie Taylor Greene to be sanctioned by House leadership over a recent interview in which she referred to bishops lending aid to immigrants as an example of “Satan controlling the church.”

Greene, who has garnered widespread criticism for giving voice to conspiracy theories, made the remarks during an hourlong interview with Church Militant, a Detroit-based, right-wing Catholic website rebuked by its own diocese and condemned by detractors for incendiary rhetoric decried as racist and homophobic.

Early in the interview, which was titled “Marjorie for Pope,” Church Militant head Michael Voris asked the lawmaker about the Catholic Church’s longtime support for undocumented immigrants. Voris expressed frustration with Catholics who assist migrants at the border, and singled out Catholic Relief Services.

Greene, a long-standing critic of the existing border policies, described such efforts as “Satan controlling the church.”

Greene did not specify a specific part of Catholic teaching she believes church leaders are violating by aiding immigrants. She went on to say that Christians should love other people — but argued Christian love should be used to further American interests, not a “globalist policy,” and accused Catholic church leaders of harming American taxpayers.

”Yes, we are supposed to love one another,” she said. “But their definition of what love one another means means destroying our laws. It means completely perverting what our Constitution says.”

Greene’s rhetoric contrasts starkly with remarks by Pope Francis, who has made support for immigrants a fixture of his papacy. The pope has visited the U.S.-Mexico border and has funded Mexico-based projects to aid migrants. In 2015, he lauded Sister Norma Pimentel, executive director of Catholic Charities of the Rio Grande Valley for her work aiding immigrants along the border, an initiative Voris appeared to reference in his interview with Greene.

In addition, Francis openly feuded with former President Donald Trump for his proposed wall along the U.S.-Mexico border, at one point saying he was willing to confront the president directly on the issue.

Greene, for her part, was one of two lawmakers who chanted “build the wall” — a reference to Trump’s border proposal — during President Joe Biden’s State of the Union address earlier this year. 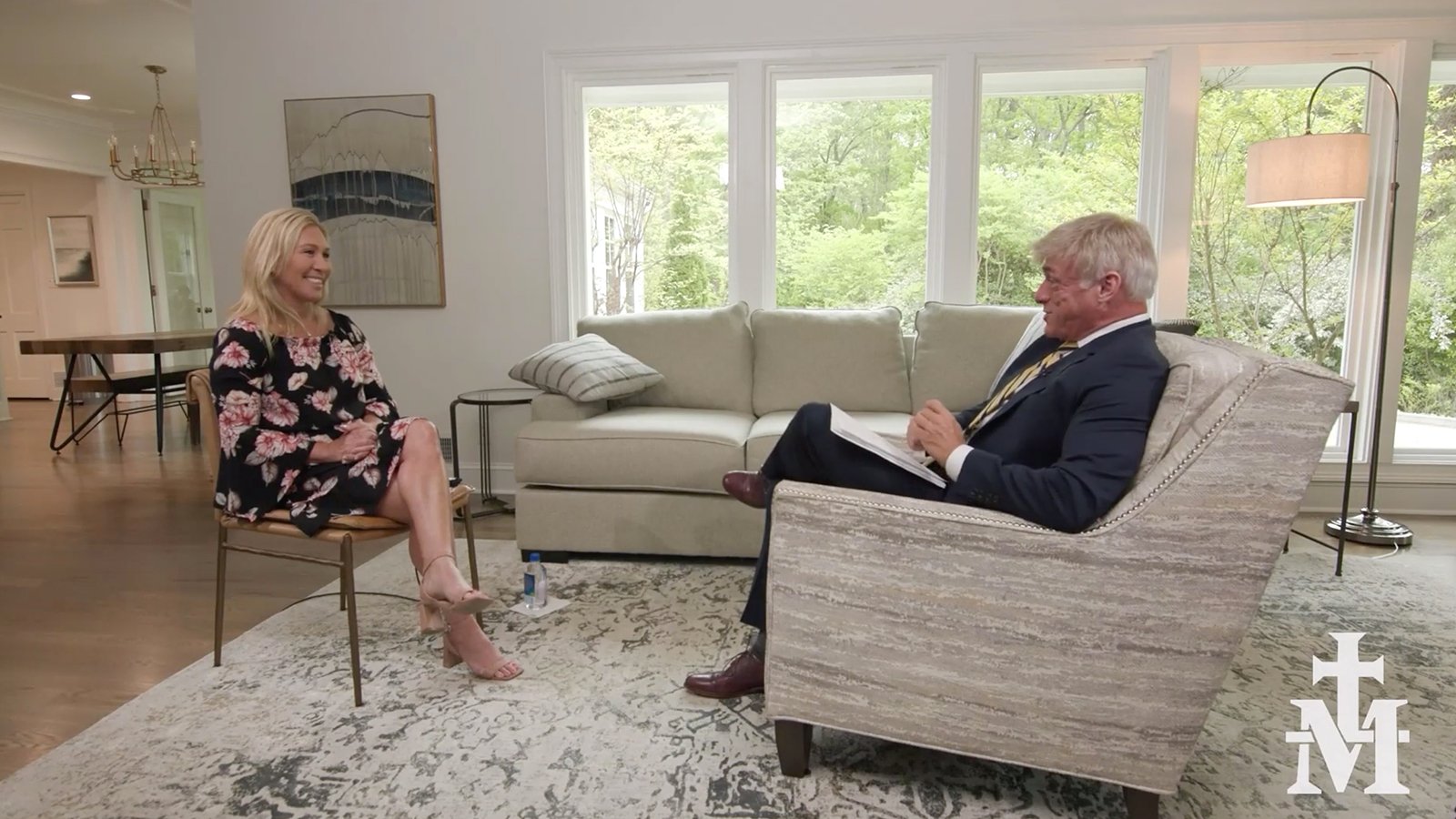 On Wednesday, Bill Donohue, leader of the conservative group Catholic League, blasted Greene for the remarks.

“She needs to apologize to Catholics immediately,” he said. “She is a disgrace.”

Representatives for McCarthy did not immediately return a request for comment.

Greene fired back in a lengthy statement posted to Twitter on Wednesday afternoon, defending her comments and insisting Donohue should instead apologize to her. She described herself as a “cradle Catholic” who stopped attending Catholic services after she had children, citing concerns about the child sex abuse crisis. (Greene was reportedly baptized around 2011 at North Point Community Church, an evangelical Protestant megachurch based in Alpharetta, Georgia.)

“Just so we’re clear, bishops, when I said ‘controlled by Satan,’ I wasn’t talking about the Catholic Church. I was talking about you,” Greene wrote. “The Catholic Church must throw out these monsters instead of lecturing the people its own bishops have driven away. I refuse to use kinder, gentler language as Bill Donohue might prefer when I talk about his disgusting and corrupt friends, who have made him rich with the donations from ordinary churchgoing Catholics.”

Greene, who reportedly texted Trump chief of staff Mark Meadows ahead of Biden’s inauguration about imposing “Marshall law” to keep Trump in office, then doubled down on her criticism of clerics who assist immigrants.

“The bishops are also busy destroying our nation using taxpayer money to advocate for the illegal invasion across our borders,” she said. “They dare to dress up Democrat vandalism and lawlessness as somehow ‘religious,’ which perhaps explains their distaste for me.”

The debate continued into Thursday, when Donohue sent a letter to the House Ethics Committee demanding Greene be sanctioned.

“The time has come for her to be either reprimanded or censured,” Donohue wrote. “Her irresponsible behavior has already caused her to be removed from committee assignments. Accordingly, her burst of anti-Catholicism now demands stronger sanctions against her.”

California Democratic Congressman Ted Lieu, who is Catholic, criticized Greene from the House floor on Thursday, calling her remarks “bigoted.”

“We have to love one another — that’s the mandate from Jesus to the church,” he said.

A representative for Catholic Relief Services sent Religion News Service a statement rebutting Greene and Voris’ characterization of the group’s work. They said CRS does not resettle refugees or undocumented migrants, but instead “assist(s) the poor and vulnerable overseas.”

“We’ve been focused on tackling the issues that force people away from their homes before it happens,” the statement read. “The root cause of migration is often violence and poverty that drive people into the unknown, searching for safety and stability. By creating jobs and working to reduce violence, families can stay in their communities, and not have to uproot just to survive.”

The back-and-forth hinted at slow-yawning fissures in conservative Catholic circles, where Donohue has often been a prominent voice in the past.

Greene, whose views associated with the QAnon movement have been decried as antisemitic and anti-Muslim and resulted in her being stripped of committee assignments shortly after assuming office in 2021, has emerged as a celebrated figure among far-right Catholics this year.

In addition to her Church Militant interview, Greene spoke in February at an event organized by Nick Fuentes, a white nationalist and Catholic whose supporters often chant “Christ is King!” while holding crucifixes aloft.

“My name is Marjorie Taylor Greene, I am the daughter of the king, the one true living God, the Alpha and Omega, our Father in heaven, and I am a forgiven sinner, washed in the blood of our Savior Jesus Christ,” she said in her remarks before the group.

Greene later distanced herself from Fuentes and his group America First, insisting she did not know their views. While introducing Greene, Fuentes credited Milo Yiannopoulos, a far-right activist who is now a contributor at Church Militant, for brokering her appearance.

Representatives for the Archdiocese of Atlanta, which encompasses most of Greene’s district, declined to comment.