WASHINGTON (RNS) — At a time when Americans seem more divided than ever on matters of faith and politics, second gentleman Doug Emhoff is touting the power of interfaith cooperation to bring people together for the common good.

“These interfaith gatherings, this connectivity, this collaboration,” Emhoff said at an interreligious iftar, “we need to build around this country and around the world.

Emhoff spoke Thursday (April 28) to about 180 gathered for the “Iftar to Celebrate American Religious Diversity,” sponsored by the Muslim-Jewish Advisory Council and supported by other multifaith groups at the U.S. Institute of Peace.

Emhoff, the first Jewish spouse of a U.S. vice president, made his remarks in a “fireside chat” moderated by Rashad Hussain, the first Muslim ambassador-at-large for international religious freedom.

The two spoke on Yom Hashoah, or Holocaust Remembrance Day, and the “Night of Power,” one of the holiest nights on the Islamic calendar, which falls near the end of Ramadan. The iftar, which marked the end of the day’s fast for Muslims, also occurred within weeks of spring holidays for a number of religious groups, including Jews, Christians, Hindus, Sikhs, Baha’i’s and Buddhists, all overlapping for the first time in more than three decades.

Hussain reveled in the diversity of the event.

“I think it’s remarkable and speaks to who we are as a country,” said Hussain, who was confirmed in December as the religious freedom ambassador.

The second gentleman, who wore a mask throughout his remarks days after Vice President Kamala Harris’ COVID-19 diagnosis, spoke about how his interfaith marriage reflected the observance of major Jewish and Christian holidays in quick succession. 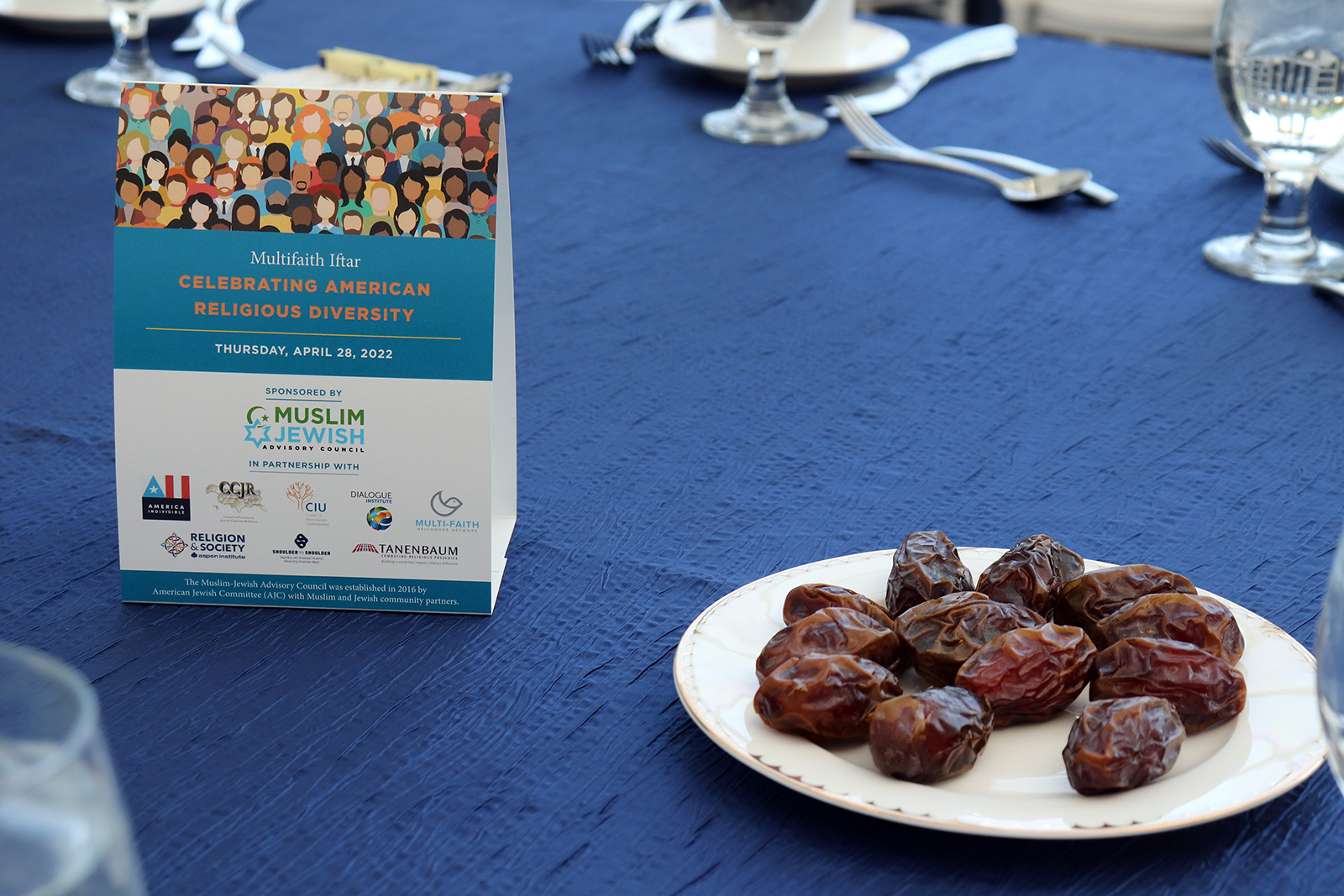 Dates are available to break the Ramadan fast during a multifaith iftar at the U.S. Institute of Peace headquarters in Washington, D.C., Thursday, April 28, 2022. RNS photo by Adelle M. Banks

“We had the first seder ever at the vice president’s residence,” he said of their Passover meal followed a couple of days later with celebrating Easter by attending a church service with his wife, who is a Baptist woman raised by a Hindu family.

Emhoff said his personal experience, in turn, fits into his continuing advocacy work in his White House role.

“It’s my job as second gentleman,” he said, “to show people that this is how it should be: Our communities working together and making sure everyone can worship the way they want to worship.”

Beyond religious rights, he said that faith leaders, who often have similar values, need to push back “when we see voting under attack, when we see others of these fundamental rights under attack, which they are throughout the country.”

Emhoff and Hussain’s discussion was the centerpiece of an evening of speeches and performances by a Muslim choir, a Catholic-born singer and a Sikh poet that preceded the breaking of the fast for Muslims. Some participants munched on dates placed on the tables before the meal of chicken, rice and vegetables was served after Muslims paused to pray. 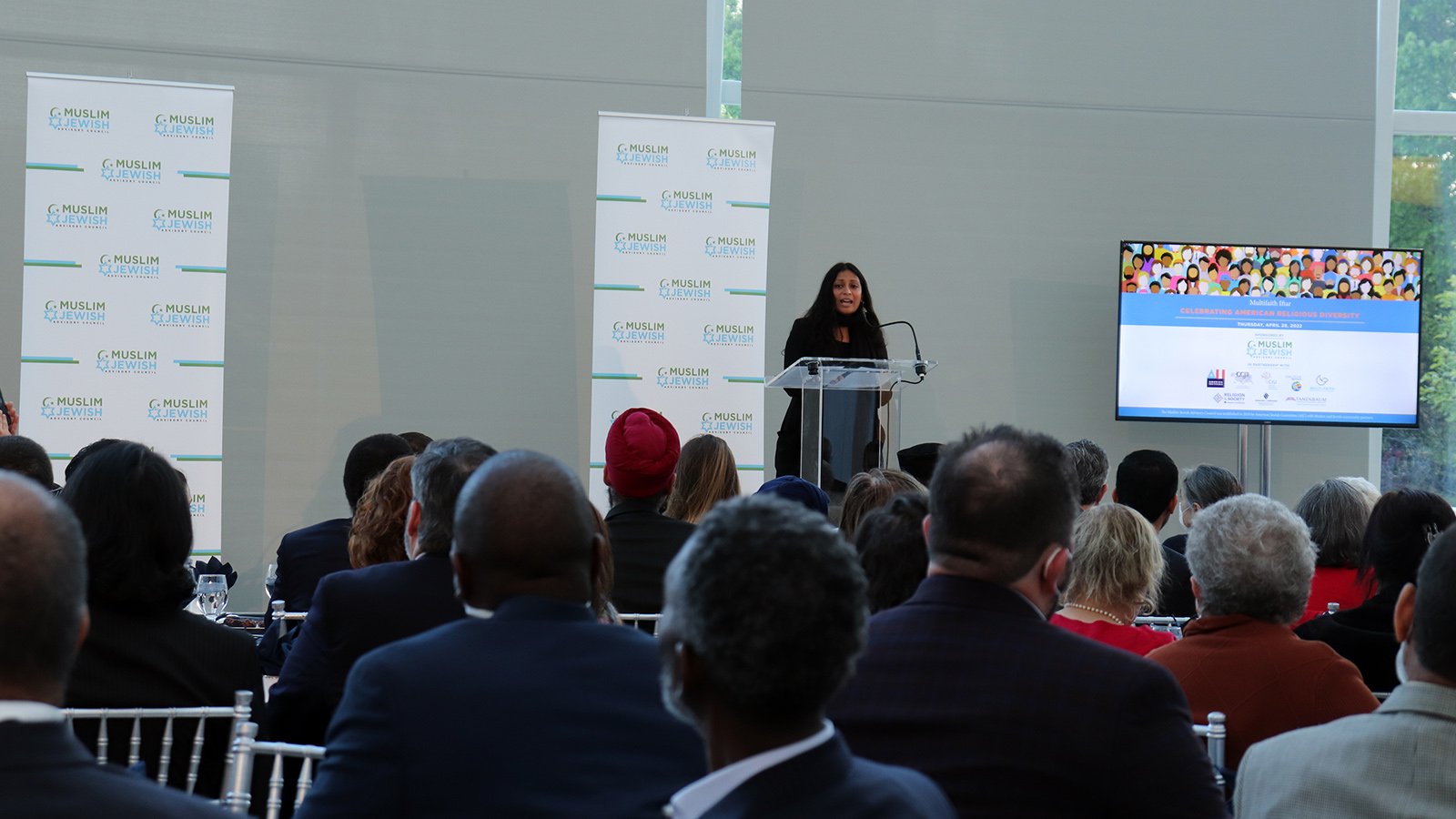 Nina Fernando, executive director of Shoulder to Shoulder, a multifaith group in solidarity with Muslim Americans, sang the prayer of St. Francis after acknowledging that her Christian faith is often prioritized in the United States.

“Let those of us who are privileged,” she urged, “take extra care for our fellow neighbors.”

Nav the Poet, a Sikh spoken-word artist, praised his immigrant father as a “champion.” Using the title and refrain, “Thank You, Come Again,” he described how his dad has driven a taxi, owned a gas station and worked at a car dealership, seeking to make his way in “the land of opportunity” in America.

Rabbi Chaim Strauchler of New Jersey read from George Washington’s letter to the Jews of Newport, Rhode Island, in which the first U.S. president said his government “gives bigotry no sanction.”

“Our ideals require a constant effort by we, the citizens of this country, to make those ideals real,” the rabbi said. Members of ADAMS Beat, a youth choir of the All Dulles Area Muslim Society in Virginia, perform during a multifaith iftar at the U.S. Institute of Peace headquarters in Washington, D.C., Thursday, April 28, 2022. RNS photo by Adelle M. Banks

In his discussion with Emhoff, Hussain sounded a similar theme. The ambassador agreed that faith leaders are needed to accompany government leaders in addressing the challenges faced by the country.

“We can’t do it alone,” he said. “We need your partnership. We need civil society. We need your ideas. And we need you to help to continue bringing us together.”