(RNS) — Like many of you, I’m still taking in the bombshell news — broken by Politico Monday evening (May 2) — that the U.S. Supreme Court is poised to overturn Roe v. Wade, the 1973 Supreme Court decision that affirmed a constitutional right to abortion. The leaked draft opinion, attributed to Justice Samuel Alito, goes straight for the jugular:

“We hold that Roe and Casey must be overruled. It is time to heed the Constitution and return the issue of abortion to the people’s elected representatives.”

The heart of Alito’s argument is striking: that because the Constitution is silent on the specific issue of abortion, no support for it can be found there. This highly restrictive interpretation intentionally mounts a full frontal assault on the long-standing body of jurisprudence based on an implied right to privacy in the Constitution.

As big as the impact of this potential ruling is for the issue of abortion, its shock waves will extend far beyond it. As it stands, it would provide a basis for dismantling nearly six decades of jurisprudence, going back to the 1965 case Griswold v. Connecticut, which secured the right of a married couple to use contraception. The current ruling, should it proceed in its present form, will set up future challenges to a range of other rights, such as same-sex marriage, birth control and even interracial marriage.

In short, Alito’s opinion, which looks likely to become the majority opinion of the U.S. Supreme Court, is the legal equivalent of a time machine that threatens to transport American jurisprudence back to the 1950s. It is part of a gambit — seen in attacks on LGBTQ rights, immigrants, the separation of church and state, and critical race theory — to hold onto a particular conservative vision of white Christian America and impose it upon a more religiously and racially diverse nation that is increasingly supportive of this set of rights grounded in a constitutional right to privacy.

The connective tissue between these issues can be seen both in how out of touch this opinion is with mainstream public opinion and in how opposition to abortion connects with other issues being pushed by conservative religious activists this year.

The current state of public opinion on abortion

First, let’s take a look at public opinion on abortion, which shows that most Americans are supportive of Roe and the legality of abortion. Support for the legality of abortion has remained fairly stable over time. If anything, there has been a slight increase in the proportion of Americans who say abortion should be legal in all cases and a slight decrease in the proportion who say it should be illegal in all cases. 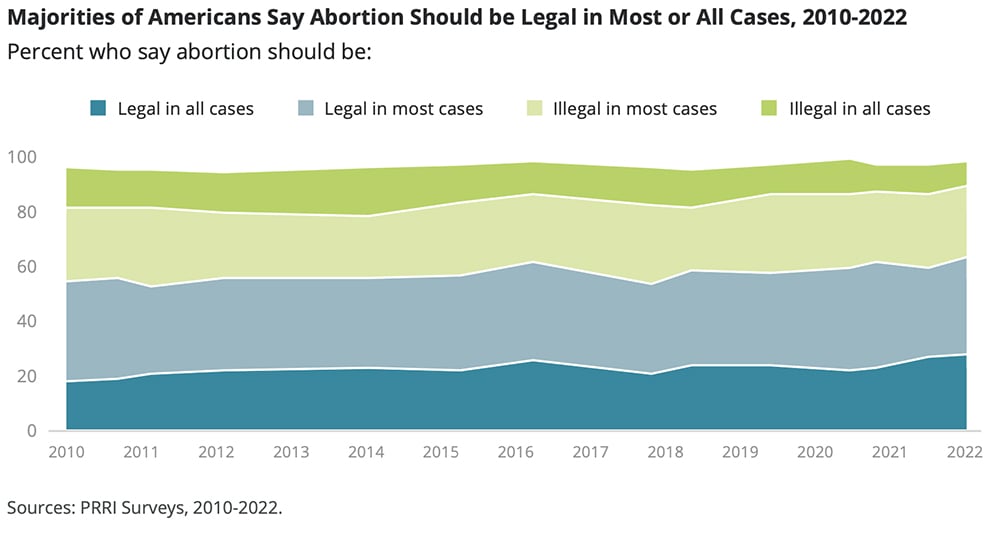 “Majorities of Americans Say Abortion Should be Legal in Most or All Cases, 2010-2022” Graphic courtesy of PRRI

Support for the legality of abortion varies significantly by state. Overall, the states with the least public support for the legality of abortion are found along a U-shaped curve from Idaho in the Mountain West, down through the Deep South and up through the Appalachian Mountains. Generally speaking, these are states with high proportions of conservative white Christians (including Latter-day Saints in the Mountain West) relative to the rest of the population. 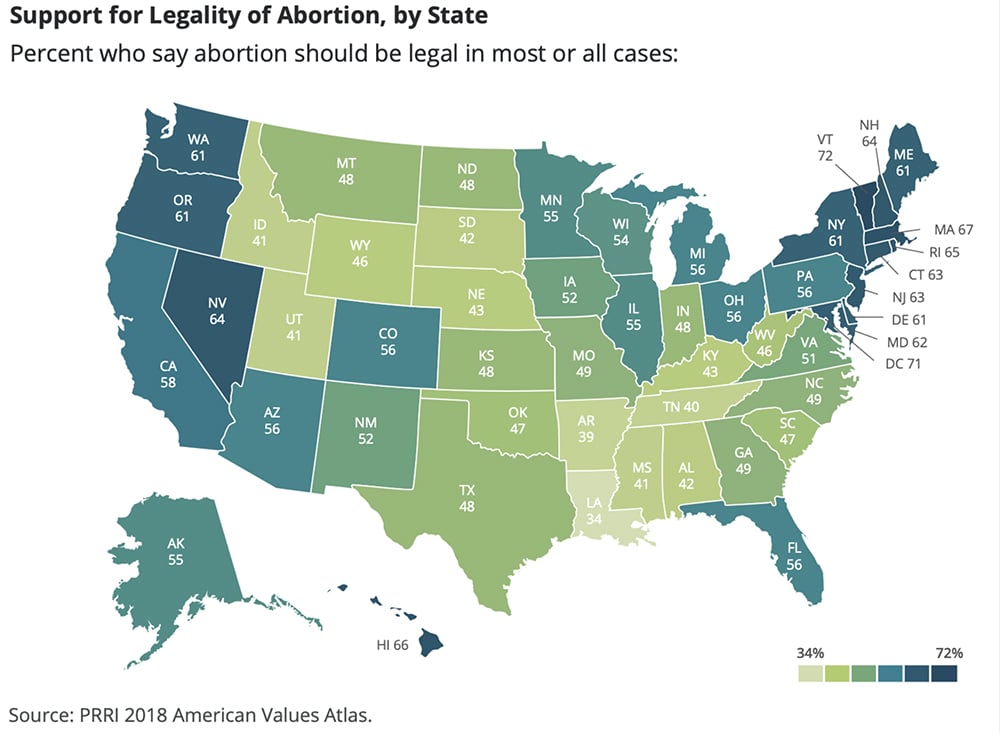 “Support for Legality of Abortion, by State” Graphic courtesy of PRRI

The division of opinions by party and religious affiliation also reveal findings that run against some conventional wisdom. The patterns of support on this issue are a good illustration of what political scientists call “asymmetric polarization,” where one party (Republicans) is further from the center than the other party.

Only 36% of Republicans believe abortion should be legal in all or most cases, a view significantly at odds with both independents (66%) and Democrats (87%).

Despite the dated conventional wisdom that abortion is opposed by religious Americans, public opinion data shows a similar asymmetric polarization among religious groups. The reality is that there is only one major religious group, white evangelical Protestants, in which a majority believe abortion should be illegal in all or most cases (30% legal vs. 69% illegal all/most cases). Latino Protestants, a group that largely shares an evangelical religious orientation with white evangelicals, are divided (52% legal vs. 47% illegal in all/most cases).

Notably, with the two exceptions of white evangelical and Latino Protestants, majorities of every other major religious group say abortion should be legal in all or most cases. Religious groups supportive of the legality of abortion, for example, include both white Catholics (59%) and Latino Catholics (57%) — who hold these positions despite the official opposition of the Catholic Church. The ranks of religious groups supportive of the legality of abortion also include African American Protestants (73% support), who are often mistakenly perceived to be conservative on this issue.

It should be no surprise that we see these attacks on abortion — settled law for half a century — ramping up in the same year we are seeing attacks on teaching kids about systemic racism or LGBTQ identity and families, and renewed challenges to church-state separation, such as the current case before the Supreme Court about whether a football coach at a public high school should be allowed to lead Protestant Christian prayers on the 50-yard line after games. These are all of a piece — a concerted attempt by conservative white Christians to reassert their dominance in a rapidly diversifying America.

Look, for example, at the strong connection between opposition to abortion and the denial of the existence of systemic racism, the understanding that the long history of discrimination continues to impact outcomes among African Americans. The general population is roughly divided on this question. But among those who believe abortion should be illegal in all or most cases, nearly 7 in 10 disagree that the legacy of slavery and discrimination results in barriers for African Americans today. 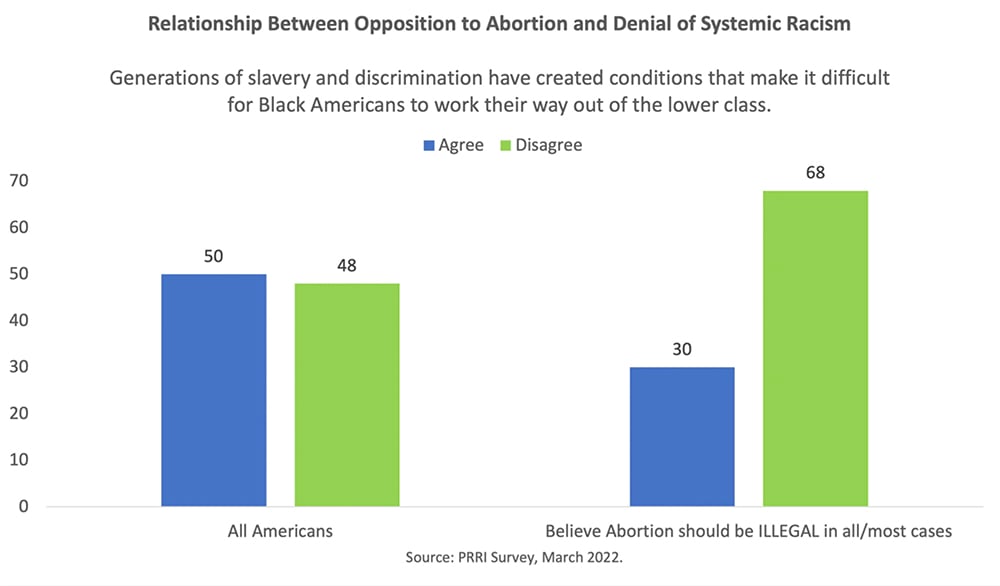 Similarly, there is a strong correlation between opposition to the legality of abortion and nostalgia for a 1950s America. As it has generally been since 2015 when PRRI first asked this question, the public is divided about whether American culture and way of life has mostly changed for the better or changed for the worse. But among those who oppose the legality of abortion, nearly two-thirds (64%) believe American culture and way of life has changed for the worse. 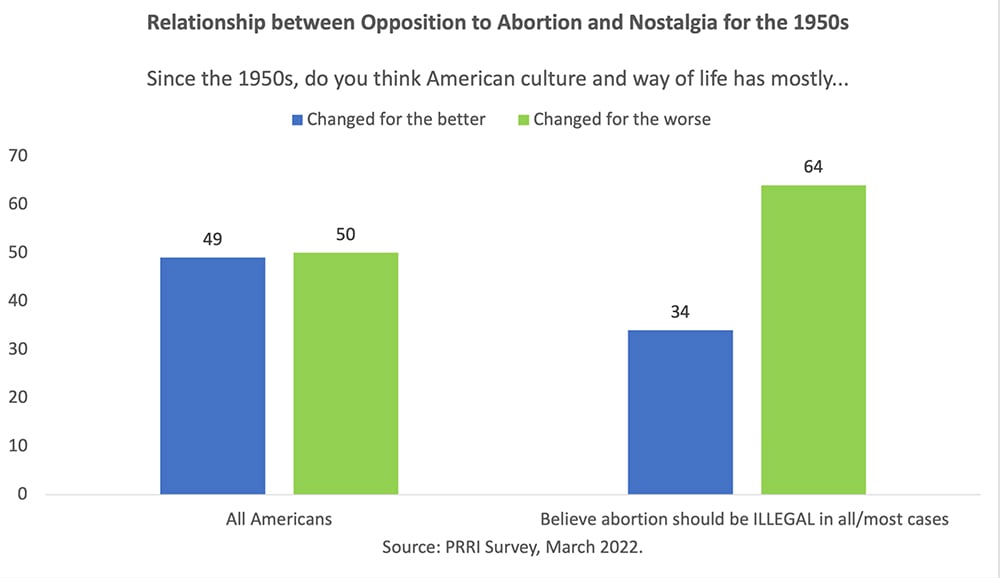 It’s no coincidence that those leading and bankrolling these efforts are largely conservative white Christians, and disproportionately white evangelical Protestants. Even as their numbers have shrunk from 54% of the population in 2008 to 44% today, white Christians continue to comprise the vast majority (73%) of the Republican Party; and white evangelical Protestants alone — a group that constitutes only 14% of the population — comprise 31% of self-identified Republicans.

In PRRI’s latest March 2022 polling, you can clearly see the links between attitudes on abortion and a range of cultural issues among white evangelical Protestants:

On most of these issues, the attitudes of white evangelicals are wildly out of step with mainstream public opinion, often by as much as 30 to 40 percentage points. White evangelical Protestants (whose median age is now 56) are living in what could be fairly described as a cultural world that is detached not only from Americans under the age of 40 but from the growing number of Christians of color and nonreligious Americans.

During Donald Trump’s presidency, conservative white Christians were enamored by his rhetoric about building a wall on our southern border. Trump’s repeated references to a wall — however disconnected from reality — penetrated deep into his followers’ consciousnesses. Even if he didn’t build a physical wall, Trump built, syllable by syllable, a metaphorical one, a symbol of protection against menacing outside forces.

While the culture wars over abortion have been with us in their current form since the Roe v. Wade decision, the pending ruling of this court, with its broad attack on a right to privacy, must be seen in the light of this current moment if it is to be fully understood. If Trump fancied himself, in the executive branch, the embodiment of a wall protecting white Christian America from the changes of the last half-century, the conservative majority on the court is unequivocally signaling to this same base that it is willing to play an analogous role in the judicial branch.

And just as Trump disregarded the damage he did to the office of the presidency, this court looks poised to shrug off the damage this baldly partisan ruling may do to the legitimacy of the Supreme Court.

This decision is not just about abortion. It represents just one, albeit powerful, part of a multipronged, desperate effort by a shrinking and aging group, while they still wield power, to impose their vision of a 1950s white Christian America on an increasingly diverse nation.