(RNS) — With proof leaking out that the Supreme Court is preparing to overturn Roe v. Wade, many are saying white evangelicals have finally gotten what they want. Giving abortion laws back to the states was the single issue that purportedly caused them to hold their noses and vote for the decidedly non-evangelical Donald Trump in 2016. It was opposition to abortion that purportedly first drew them to the Republican Party in the 1980s.

But abortion is not the only thing driving white evangelical politics. Also high on the list are other items in the headlines: Marjorie Taylor Greene, Republican Representative from Georgia whose base is largely white evangelicals, lambasted Catholic aid to immigrants as “Satan running the church.”

Last week, two days after the SCOTUS leak, a forum for candidates for the presidency of the Southern Baptist Convention was far more concerned with critical race theory than a pro-life victory.

These events, which target “outsiders” and a supposedly corrupt government, have strong appeal for many white evangelicals, just as Trump’s vilification of the “deep state” and immigrants was a powerful reason white evangelicals went for him by percentages of 81% in 2016 and 84% in 2020.

When asked after the 2016 presidential election which factors were most important in their choice of candidate, white evangelicals put the economy, health care policy and national security ahead of abortion. In 2020, the economy was again the highest priority, followed by the COVID-19 pandemic. Today 46% oppose overturning Roe.

Targeting “outsiders” (minorities, immigrants) and a supposedly corrupt “deep state” is a populist response to economic and other stresses that creates us-vs.-them frameworks and is fed by historical and cultural notions of social status (who’s in, who’s out) and government (its proper size and role).

Other Americans share many of these stresses — economic change, shifts in gender roles and demographics and fear of losing a secure place in society. But some bear specifically on white evangelicals, whose church membership is declining and whose values are being overwhelmed by an increasingly secular and liberal society. Think marriage for same-sex couples.

When threatened, a group naturally shifts to constraining the “other” that is thought to be the source of duress. It’s a defense mechanism of first resort. “The more stressful the situation,” psychiatrist Vamik Volkan wrote in his 1997 book “Bloodlines,” “the more neighbor groups become preoccupied with each other.” 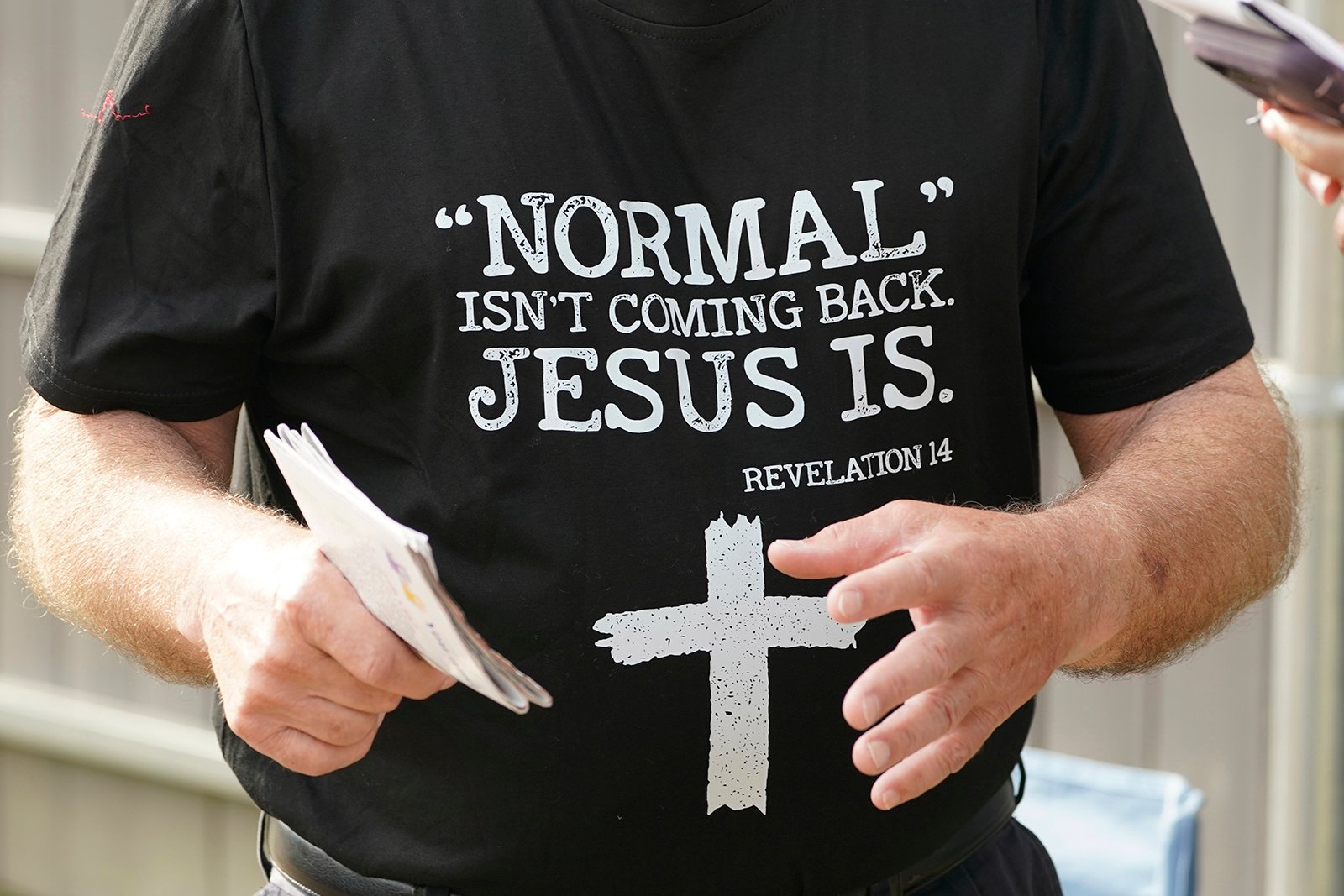 But which “other”? That’s rooted in history. The ancestors of today’s evangelicals — Europe’s persecuted Anabaptists and other Protestant minorities — developed a keen wariness of government, elite authority and outsiders who threatened to disturb their way of life. The 1620 “Mayflower Compact,” which declared “a civil Body Politick,” also sought to control non-Puritans — others.

With their wariness of government and strong community commitment, evangelicals became prime builders of America’s self-reliant ethos. By 1850, evangelical churches had twice the employees, twice as many facilities and raised three times as much money as the post office, the largest U.S. government office.

From the late 19th century into the early 20th, however, evangelicals saw challenges to their place in America. Industrialization and urbanization brought people in contact with new ideas. The academic historical-critical school of biblical exegesis challenged evangelicalism’s grassroots reading of Scripture. Darwinism brought on the 1925 Supreme Court case permitting the teaching of “un”biblical evolution theory in public schools.

From the 1960s on, the Supreme Court further alienated evangelicals from the society around them, ruling in 1962 that school-led prayer was unconstitutional. Federal government was expanded with the 1964 Civil Rights law and Great Society social services. Then came the sexual revolution and the feminist and gay right movements, yielding Roe in 1973 and, in 2015, Obergefell v. Hodges, in which the Court ruled that marriage should be legal for same-sex couples as for the rest of America.

The political cry, from the white evangelical perspective, is not a call for authoritarianism but for freedom from the state, from the tyranny of the secular and from “outsider” interference with local ways. In explaining the 2016 election, Tony Perkins, president of the Family Research Council, said evangelicals were “tired of being kicked around by Barack Obama and his leftists” and were “finally glad that there’s somebody on the playground that is willing to punch the bully.”

This explains why white evangelicals made a legislative priority of elements of the GOP platform, such as low taxation and deregulation, that are found nowhere in the Bible. Evangelical support for George W. Bush rose 10 percentage points from 2000 to 2004, even though the Republicans put forth no national legislation limiting abortion.

The Obama administration, increasing the presence of minorities in authoritative positions and expanding federal government, sharpened white evangelical resistance to Washington and fueled their traditional suspicion of outsiders. Religious right radio hosts conflated “Beltway and Manhattan elites” and a “new and accepted tribalism and xenophobia” that discriminated against “white European ‘Christian’ varieties” of people.

By 2021, 66% of white evangelicals thought of newcomers as “invaders.” Fifty-seven percent preferred living in a country where most people are Christian. No other religious group comes within 20 percentage points of this majority. White evangelical politics, in sum, will not end with the overturning of Roe. They may continue their campaign against abortion in states where it’s legal, but they will continue to seek to counter their own decline in ways that cannot be legislated or argued away.

(Marcia Pally is an adjunct full professor at New York University and guest professor in the theology faculty at Humboldt University-Berlin. Her latest book is “White Evangelicals and Right-wing Populism: How Did We Get Here?”  The views expressed in this commentary do not necessarily reflect those of Religion News Service.)