CHICAGO (RNS) — She’s been hailed as a “secular country-pop saint” and the “Jesus of Appalachia.”

Her ability to bridge divides has made her the subject of many a recent think piece, a popular podcast series and even proposals to replace statues of Confederate figures with her image.

And over the past few weeks, Dolly Parton has been the subject of a five-part sermon series at Church of the Three Crosses in Chicago’s Old Town neighborhood.

The Rev. Britt Cox wrapped up her sermon series “The Gospel According to Dolly” on Sunday (May 29) at the church, which describes itself as an “ever-widening inclusive Christian community” belonging to both the United Methodist Church and the United Church of Christ.

“We’ve been using Dolly as a way to talk about story and our larger story of faith and that all of our stories matter and that God’s story is continuing on in us,” Cox told the congregation, accompanied by a flourish from the church’s pianist.

Church of the Three Crosses has been focusing on sharing personal stories since returning to in-person services during the COVID-19 pandemic, Cox told Religion News Service. New members began attending while the church was meeting online. Longtime members hadn’t seen each other face to face or caught up in months. 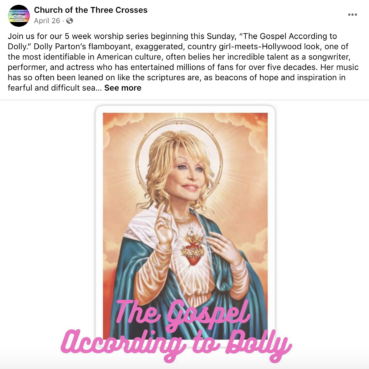 Church of the Three Crosses in Chicago shares about its series “The Gospel According to Dolly” on its Facebook page. Screen grab

Parton’s ability to connect with many different people — young and old, religious and non-religious, from red states and blue — through story felt instructive as the congregation got to know each other again.

Plus, Cox said, “She’s really a person who walks her talk.”

Growing up in Texas — where, the pastor said, country music is woven into the church — she admired Parton’s music and subversive sense of humor. Later, she realized the singer-songwriter, who is a Christian, also shares beautiful messages in her songs — some overtly religious, like her 2019 song “God Only Knows” with Christian musical duo For King & Country.

Parton also invests the money she’s made into causes she cares about, like child literacy. Most recently, she’s earned praise for her $1 million donation to COVID-19 research, which was partly used to fund Moderna’s vaccine.

Parton has said she thinks it’s great if she can set a good example.

“But,” she told People Magazine in December, “I don’t want to be worshiped, because there’s a scripture in my Bible that talks about idol worship. And I see that happening all the time with movie stars and these celebrities. People literally worship them more than they worship God. And I just — I cringe at it sometimes.”

Each Sunday’s sermon at Church of the Three Crosses has focused on a different song by Parton, all but one performed by a member of the congregation.

Cox drew inspiration from a sermon series called “The Gospel According to Dolly Parton” at Mayflower Congregational United Church of Christ in Oklahoma City, from the WNYC podcast “Dolly Parton’s America” and from current events.

A planned sermon on Parton’s song “Coat of Many Colors” — a natural choice, since the lyrics draw upon the biblical story of Joseph and his coat of many colors — was scrapped the weekend after the Supreme Court’s draft opinion that would overturn Roe v. Wade was leaked. The Rev. Britt Cox preaches a sermon on Matthew 18:21-35 — and Dolly Parton’s song “I Will Always Love You” on May 29, 2022, at Church of the Three Crosses in Chicago. RNS photo by Emily McFarlan Miller

Instead, Cox preached on “19th Amendment,” Parton’s contribution to a WNYC project collecting songs inspired by each of the 27 amendments to the U.S. Constitution. She wove together the song about women fighting for the right to vote with the biblical story of a Canaanite woman arguing with Jesus to heal her daughter.

Other sermons expounded on “9 to 5,” “Jolene” and “My Tennessee Mountain Home.”

At Sunday’s service — held in the church’s grassy side yard on a warm, if windy, almost-summer day — life was as peaceful as a baby’s sigh, as the song goes.

Cox played a recording a church member had made of an upbeat rendition of “I Will Always Love You,” Parton’s 1974 song made most famous by Whitney Houston in the 1990s, and used it as a jumping off point to talk about Jesus’ command in the Gospels to forgive “not seven times, but, I tell you, 77 times.”

“I Will Always Love You” is not a love song, but a goodbye song, the pastor explained. Parton had written the song partly as a farewell to her music partner Porter Wagoner when she struck out to pursue a solo career, she said.

“It’s a song about goodbyes, about endings, about forgiveness on both their parts in order for them to be able to move into a new beginning,” she said.

It was a fitting song to end the series as Cox prepares to say her own goodbyes to the congregation, leaving on a proverbial high note as she takes a new appointment.

“Why not Dolly Parton?” longtime Church of the Three Crosses member Dana McKinney said over coffee and cookies after the service.

McKinney isn’t sure she believes “all of the dogmas.” But, she said, “coming to worship is about changing perspectives, being able to look at something in a way that’s going to help me go out into the world and just be a better person.”

She’ll never hear “I Will Always Love You” again without thinking of forgiveness, she said.