(The Conversation) — The COVID-19 pandemic brought new attention to the work of chaplains.

Before the pandemic, as an article in The New York Times put it, the place of the hospital chaplain was “at the bedside, holding a patient’s hand, counseling them and their family members, singing with them, crying with them, hugging them, offering the eucharist, or a prayer for healing.”

As the pandemic unfolded, the work of chaplains – increasingly called spiritual care providers – changed. Some were declared essential employees and continued to work in person, but they were not allowed into rooms with COVID-19 patients. They offered words of encouragement and solace through baby monitors and posters taped to patients’ doors.

COVID-19 also shifted the work of hospital chaplains from focusing primarily on patients to bridging the gap between dying patients and their distanced family members. Many helped family members at home connect to hospitalized loved ones by phone, FaceTime, Zoom and other technologies. Some chaplains started rolling carts of treats and pick-me-ups for hospital staff to promote self-care and prevent burnout.

A national survey conducted in 2019 found that 21% of the American public had contact with a chaplain in the past two years. Of those encounters, 57% took place in a health care setting. Other encounters happened in places like the military, higher education, and more.

As scholars of American religion and spirituality, we know that chaplains have long histories in health care organizations and have been visible over time to varying degrees.

The origins of modern spiritual care

Chaplaincy emerged as a professional field in the mid-20th century out of Protestant efforts to reform theological education. Concerned about the growing influence of psychology and psychiatry in matters previously understood only as spiritual, Protestant theological leaders in the 1920s sought to get students out of classrooms and into real-life situations where they would learn to respond to the challenges and struggles people face in their daily lives.

In hospital settings before the 1920s, chaplains were retired or volunteer clergy with no special training. They visited patients in their own religious traditions alongside other volunteers. Religiously founded hospitals also frequently had priests, ministers or rabbis in service, reflecting the hospital’s religious affiliation.

Many nurses offered religious support at the bedside, rooted in their own religious commitments. In the mid-19th century, Florence Nightingale, who rose to prominence from her service to soldiers in the Crimean War, saw both to patients’ spiritual and physical needs.

Training in the field

As theological educators worked to reform Protestant theological education in the 1920s, they formalized Clinical Pastoral Education, or CPE. Initially pioneered by a leading chaplain, Anton Boisen, and supported by Richard Cabot, a physician at Massachusetts General Hospital, CPE students completed internships in hospitals that supplemented their classroom training. Boisen viewed patients as “living human documents” from which to learn.
CPE students in later years wrote “verbatims,” or reports of conversations they had with patients.

While most people who completed units of CPE did not go on to become chaplains, a few did. By the 1940s, those who wanted to work in hospitals based on their CPE training started to organize themselves as a distinct professional group.

Unlike retired clergy, who mostly made short visits and offered rituals, CPE-trained clergy worked from referrals and connections with hospital staff, made care plans based on the severity of a patient’s illness, documented their visits and were accountable to someone within the hospital.

Data collected by the American Hospital Association suggested that two-thirds of American hospitals had a chaplain by the mid-1950s, though it is not clear how many were CPE-trained.

The development of chaplaincy as a profession distinct from that of local clergy was also supported by the extensive work of military chaplains on the front lines during World War II and their subsequent memorialization in American public life, such as Chaplains Hill at Arlington National Cemetery.

Chaplains in military settings rose to such prominence in the American mind that one who served in the Korean War, Emil Kapaun, is now being considered for sainthood in the Catholic Church for his service to fellow prisoners of war. The priest died in the Pyoktong POW camp in May 1951. 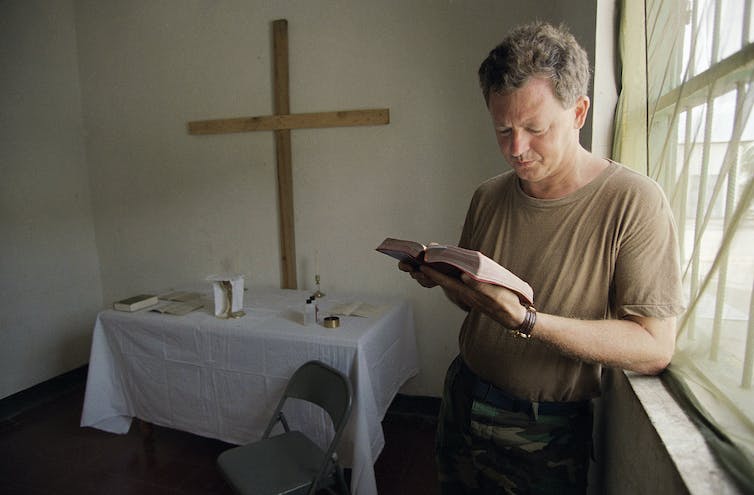 Initially chaplains were almost all white Protestant men, but the demographics changed slowly through the 20th century. The National Association of Catholic Chaplains was founded in 1965 and the National Association of Jewish Chaplains, now known as Neshama, in 1990. Growing numbers of women and people of color began to enter the field toward the end of the 20th century, and more health care providers began to pay attention to the role of religion and spirituality in patients’ experiences.

About two-thirds of hospitals have chaplains today, which include growing numbers of Buddhist, Muslim, Hindu and other non-Christian chaplains. In the 1990s, theological schools began to develop specific degree programs in chaplaincy and spiritual care, rather than expecting chaplains to train for congregational service and then figure out on their own how to apply their training to other settings.

More than a quarter of theological or rabbinical schools currently have such programs, with some designed specifically for Buddhists, Muslims and people from other non-Christian religious backgrounds.

All chaplains today need basic training in caring for people that includes understanding how individuals make meaning, the interpersonal skills necessary to care for people from different backgrounds, and navigating the complexity of organizations in which they work.

What chaplains really do

Health care chaplains talk a lot about presence when describing their work, which is increasingly based on the results of empirical research. Presence means everything from casual conversation with patients and families to mediating conflicts between patients, families and care teams. It can also mean offering prayer or other explicitly religious service, and listening to patients’ deepest fears, religious or otherwise.

Research about the effects of chaplains’ work has expanded significantly in recent years and shows that individuals who are visited by chaplains are more satisfied with their hospital stays and often have improved outcomes.

Many chaplains reported serving expanding roles during the pandemic and having found increased visibility among hospital staff. Some noted a greater sense of appreciation and knowledge among staff of what chaplains do. Chaplains aim to continue care of hospital staff through educational programs, among others.

As religious demographics continue to shift in the United States and growing numbers of people are not religiously affiliated, the work of health care chaplains will continue to change.

Michael Skaggs receives receives funding from The Fetzer Institute, the Templeton Religion Trust, and the Henry Luce Foundation, The John Templeton Foundation, and ACPE: The Standard for Spiritual Care and Education. He is a co-founder and Director of Programs of the Chaplaincy Innovation Lab.