(RNS) — Bishop Megan Rohrer chose to remove a Latino pastor last December on the Feast of Our Lady Guadalupe even after being made aware that doing so, on one of the most culturally significant and sacred days for Latino Christians, would be “potentially devastating,” according to a report released Wednesday (June 1) that examined the circumstances of that day.

The decision by Rohrer, who presides over the Sierra Pacific Synod of the Evangelical Lutheran Church in America, was criticized by the Asociación de Ministerios Latinos de la ELCA as showing a “lack of empathy and understanding toward their Latinx siblings.” Bishop Elizabeth Eaton, head of the ELCA, appointed a listening team to review the Dec. 12 disruption and to produce the report.

The council of the Sierra Pacific Synod, which covers central and northern California as well as northern Nevada, voted on Dec. 11 to vacate the Rev. Nelson Rabell-González’s call as mission developer and to terminate his employment.

As the report details, the Misión Latina Luterana congregation in Stockton, California, had no idea about Rabell-González’s removal until members noticed he wasn’t the one leading the Dec. 12 worship service and celebration. Instead, the Rev. Hazel Salazar-Davidson — whose opposition to the pastor’s removal that day is detailed in an attachment of the report — was directed by Rohrer to lead the service. Congregants began questioning out loud about his whereabouts.

Rohrer, who was at the service, didn’t offer further explanations after congregants were informed of his removal, according to the report. Parishioners described Rohrer’s facial expression as a “smirk” that made them feel “small, attacked and humiliated,” but the report also noted that “such an expression on the face of an autistic person is often a response to the stress of a situation.” Rohrer, who uses they/them pronouns, is the first transgender bishop in the Evangelical Lutheran Church in America and has described themself as neurodivergent.

Video of the service shows parishioners walking out of the sanctuary as they carried a statue of the Virgin of Guadalupe that had been placed at the center of their celebration. “The community must be taken into account!” one woman yelled in Spanish. Rohrer stood and watched as parishioners left the church.

Rohrer also reportedly threatened a child and her father with calling the police if they didn’t leave the sacristy. The bishop wore a bulletproof vest during the service because, according to the report, “they had concerns about their safety and well-being.”

The report was conducted by a three-person team, with one member suggested by Rohrer, a second member nominated by Latino Lutheran leaders and a third appointed by Eaton. The team’s main goal was to interview people directly involved and affected by Rohrer’s actions surrounding the Dec. 12 incident.

The listening team, in the report, recommended Eaton bring disciplinary charges against Rohrer, “with the full knowledge that such action could result in removal from the Office of Bishop and the removal from the ministry of Word and Sacrament of this church.”

Eaton, however, announced in a May 27 report to the church that she had requested Rohrer’s resignation from the denomination’s Sierra Pacific Synod. “Unwise decisions” are not automatic grounds for discipline in the denomination, according to the presiding bishop’s statement. The listening team criticized Eaton for never once mentioning racism in her report. 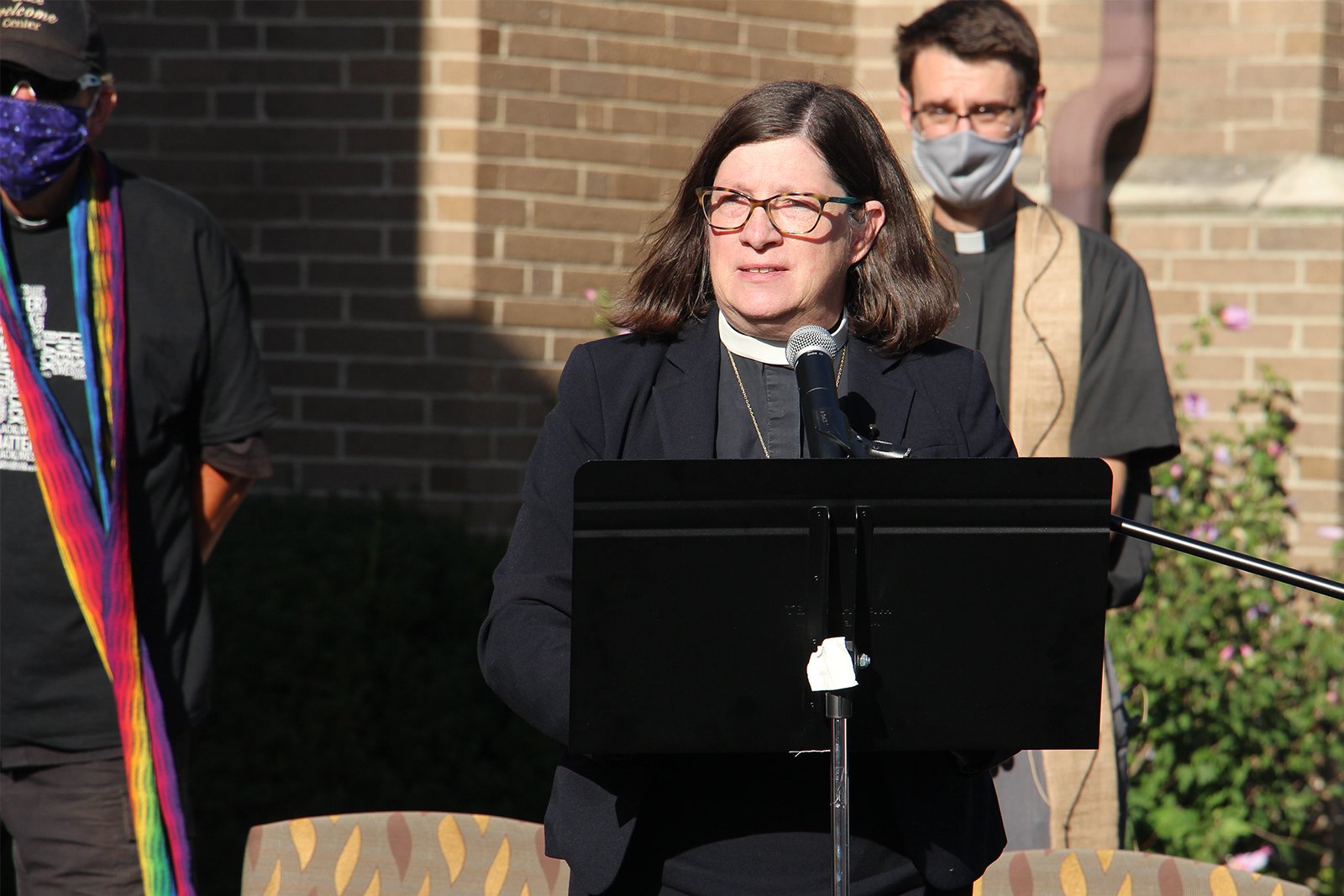 In response, the Asociación de Ministerios Latinos de la ELCA said in a May 28 statement that Eaton framed “racist actions as ‘unwise decisions’ and ‘unfortunate events,’ completely ignoring the suffering of an entire community of color.”

The association added that Eaton was giving Rohrer, whom they characterized as “a white aggressor,” a chance to choose their own fate, describing Eaton’s decision as “deeply rooted in white supremacy and systemic racism.”

The report initially was made available only to certain leaders, about a month ago, but Eaton released it publicly on Wednesday.

“There are systemic issues of broken trust at all levels within the ELCA that will require intentional work to repair and address,” she said in a statement Wednesday, adding that the delay in the report’s release contributed to those issues. “I apologize for the delay, and I feel broken-hearted for the pain that has been caused.”

It isn’t completely clear what led to Rabell-González’s removal, but in a previous statement, the council of the Sierra Pacific Synod said it unanimously decided to vacate the pastor’s call after “continual communications of verbal harassment and retaliatory actions from more than a dozen victims from 2019 to the present.”

Rabell-González, who was considered for bishop in the election that ultimately chose Rohrer, has denied those accusations to Religion News Service. After Rohrer’s appointment, the synod council created an advisory council to look into the allegations against Rabell-González and identified “compassionate steps” for him to take, which became part of the terms and requirements of his call, according to the council’s statement on the Sierra Pacific Synod blog.

Rabell-González, who is Afro-Caribbean, informed Rohrer on Dec. 9 he would not fulfill those terms and requirements, according to the council, which took action Dec. 11 at its regular meeting.

Prior to relocating in spring 2021 to what would become Misión Latina Luterana in Stockton, Rabell-González had resigned from another congregation after being accused of harassment and bullying, according to the report. The team said that congregation was never officially told why he resigned, but reported that some felt allegations against the pastor escalated after he was quoted in a Los Angeles Times story about how racial justice protests had been met with backlash in the region. Some members of that congregation followed Rabell-González to Stockton, which was about 45 minutes away from their previous parish.

The decision in December to vacate Pastor Rabell-González’s call simultaneously ceased funding for the congregation, according to the report.

There are no plans to replace the pastor or continue to support the congregation, which has decided to change its name to Iglesia Luterana Santa María Peregrina, or Holy Mary Pilgrim Lutheran Church, “as a way to describe their experience of feeling assaulted and forced to become pilgrims yet again,” the report noted. The congregation now worships in a parking lot.

The report found that Rohrer’s treatment of certain staff members “created trauma for them in their positions.” They felt “a lack of agency” due to the bishop’s refusal to accept their guidance about Dec. 12 and other matters. Rohrer apologized in a written statement late December.

“The Bishop continually reminded the staff that they — the bishop — should make all the decisions and did not need consultation,” the report read.

The listening team noted that the Sierra Pacific Synod has long been a supporter of LGBTQ people and highlighted that the congregation “spoke about the pride of electing the first openly transgender bishop in the ELCA.”

However, as part of the investigation, the team learned that many believed “Rohrer has weaponized parts of their identity to defend their position and avoid being accountable for the alleged racist misconduct.”

Salazar-Davidson, who was directed to lead the Dec. 12 service, said there have been numerous instances in which Rohrer “became defensive” when members of the ELCA approached them regarding the Dec. 12 events.

“In particular, members of color and other leaders from the trans community identified that when Bishop Rohrer enters a space, especially of people of color, they will consistently be interpreted as a white masculine-presenting person,” Salazar-Davidson said. “This was not an attempt to diminish Bishop Rohrer’s transgender identity, but instead to alert them to how their presence impacts marginalized groups. Instead of hearing how they impact others, they became defensive and accused them of ‘gender violence’ and ‘transphobia,’” she added.

The team also found that the Sierra Pacific Synod council is not meeting diversity membership requirements as stated in its constitution. “The likelihood of injustice is high when a predominantly (or entire) white group is in charge of decision-making for a person or community that differs from itself,” according to the report.

It also calls on the presiding bishop to create a diverse task force to review the policies and procedures of the ELCA and a crisis management team to provide support and advice to the organization’s leaders.