(RNS) — A Louisiana church led by the spokesman for the Conservative Baptist Network — which claims the Southern Baptist Convention has become too liberal — has been ordered to turn over nearly a decade of financial records to former members.

In a pair of court filings, members of First Baptist Church of Bossier, Louisiana, accused pastor Brad Jurkovich of diverting to the CBN funds meant to support missionaries. They also allege that Jurkovich blocked them from seeing church financial records, in violation of Louisiana nonprofit law, and that the pastor illegally changed the church’s bylaws.

In late May, Judge Charles Smith of the 26th Judicial Court in Bossier Parish ruled that the church had to turn over financial records dating back to 2013. Those records include bank statements, W-2 statements, paid invoices, purchase orders and bank deposits and transfers. The church was also ordered to turn over details of staff housing allowances, names of staffers holding church credit cards and cellphones, and any loan documents or nondisclosure agreements related to the church.

Smith said in a May 27 ruling on a writ of mandamus that the church could withhold information on donations and denied the former members access to the church’s servers.

The ruling is the latest development in a long-running feud at the church between Jurkovich and a group of members over finances and bylaws at First Baptist. According to a complaint filed in Louisiana court in mid-May, the feud began last summer after a group of members sent a letter to Jurkovich with a list of concerns, including staff turnover and lack of financial transparency.

The letter led Jurkovich to send an angry email telling the dissident members, “you either trust and follow the leadership or not,” according to the complaint. Jurkovich later agreed to allow the church members to see some church records, provided they sign a nondisclosure agreement. After signing the agreement, the two sides could not agree on what records would be available for review.

“On or around October 3, 2021, One Hundred Sixty-One (161) members of the congregation sent a letter, via email, to Dr. Jurkovich calling for his resignation over his misrepresentations, staffing turnover, personnel decisions, lack of accountability in FBB finances, and inability to lead,” according to the complaint.

Also at issue: changes made to the church’s bylaws in 2014, giving Jurkovich the ability to remove church members from the congregation — which had previously been a decision made by the church’s board of directors.

“The sole power to expel members of FBB is vested with Dr. Jurkovich, the self-appointed President/Chairman-for-life of FBB,” according to the complaint, which alleges the changes to the bylaws were not valid.

The church members also claim Jurkovich failed to inform church members that funds meant for supporting missionaries were instead used to support the CBN, where along with being spokesman, Jurkovich serves on the group’s steering council. Founded in 2020, the CBN claims that liberals, critical race theory and female preachers have invaded the Southern Baptist Convention and vows to change the direction of the country’s largest Protestant denomination. Last year, a CBN-backed candidate narrowly lost the election for SBC president. The group currently backs Florida pastor Tom Ascol for president in the election scheduled for the SBC’s June annual meeting.

Jurkovich did not respond to repeated emails and a voice message requesting comment. He did address the lawsuit during a First Baptist worship service on Sunday (June 5), saying the church had already agreed to turn over most of the documents before the court ruling.

He called the plaintiffs in the lawsuit “nonmembers” who had been causing trouble at the church for months. Jurkovich also told his church that the judge ruled the nondisclosure agreement between the church and the plaintiffs was still binding.

“This means that absolutely none of the information already produced or to be produced over this ruling is to be shared or leaked,” he said. “And if any of it is then this group will be held accountable legally.”

“Ultimately, we know that we’re in a spiritual battle,” he said. “And Satan wants to absolutely destroy this ministry. And I’m going tell you right now in the name of Jesus you cannot destroy his church. You can’t do it. You can’t do it.”

“These lawsuits represent an attempt by former members of First Baptist Bossier to inappropriately litigate an internal church dispute,” he said.

This story has been updated with Jurkovich’s statement. 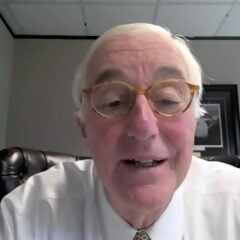