(RNS) — At the Southern Baptist Convention annual meeting in Anaheim next week (June 14-15), delegates to the meeting, known as messengers, will grapple with the massive report released in May detailing the SBC’s Executive Committee mishandling of sexual abuse allegations in the convention.

Bart Barber, pastor of First Baptist Church of Farmersville, Texas, will be watching the proceedings as someone who has seen how accusations of sexual abuse played out at his own church, and also as a candidate for the presidency of the SBC, the nation’s largest Protestant denomination.

As pastor of his predominantly white, rural church where about 320 attend weekly, Barber has taken a direct, if relatively hands-off, approach to abuse allegations: “Call the police first and then let me know,” he said he tells his staff.

After a now-removed church member pled guilty in 2008 to child indecency and sexual assault and subsequently served time in prison, Barber said, he came to appreciate the importance of timely reporting and an effective process regarding abuse.

Staffers intervened and contacted authorities when they were concerned the man might be grooming teen members, and the man later admitted to molesting the teens when they worked for him. After press reports about the case were published, Barber heard from a Dallas man who said he had been molested by the same perpetrator earlier in another state “in conjunction with a Christian ministry.” That ministry was aware of the incident, but no charges were filed.

“This experience has solidified in me what was, previously, a set of best practices we employed as a defense against what was a theoretical threat (somebody someday might try to abuse someone here in Farmersville),” he told Religion News Service in an email message. “We now know firsthand the harm that can come to people when predators are not reported, prosecuted and registered as offenders.”

Barber said he agrees with the proposal of the Sexual Abuse Task Force to hire a national staff person who would receive reports of abuse allegations and determine what church or other SBC entity should respond to them.

“We have hired staff in the past to give our Executive Committee the expertise to be able to work with other constituencies within the convention,” he said, including Asian Americans, African Americans and small churches. “And so the idea that we would look and say, ‘We need somebody who really understands the perspective of survivors of sexual abuse,’ that seems to be something that’s in line with actions we’ve taken in the past.” 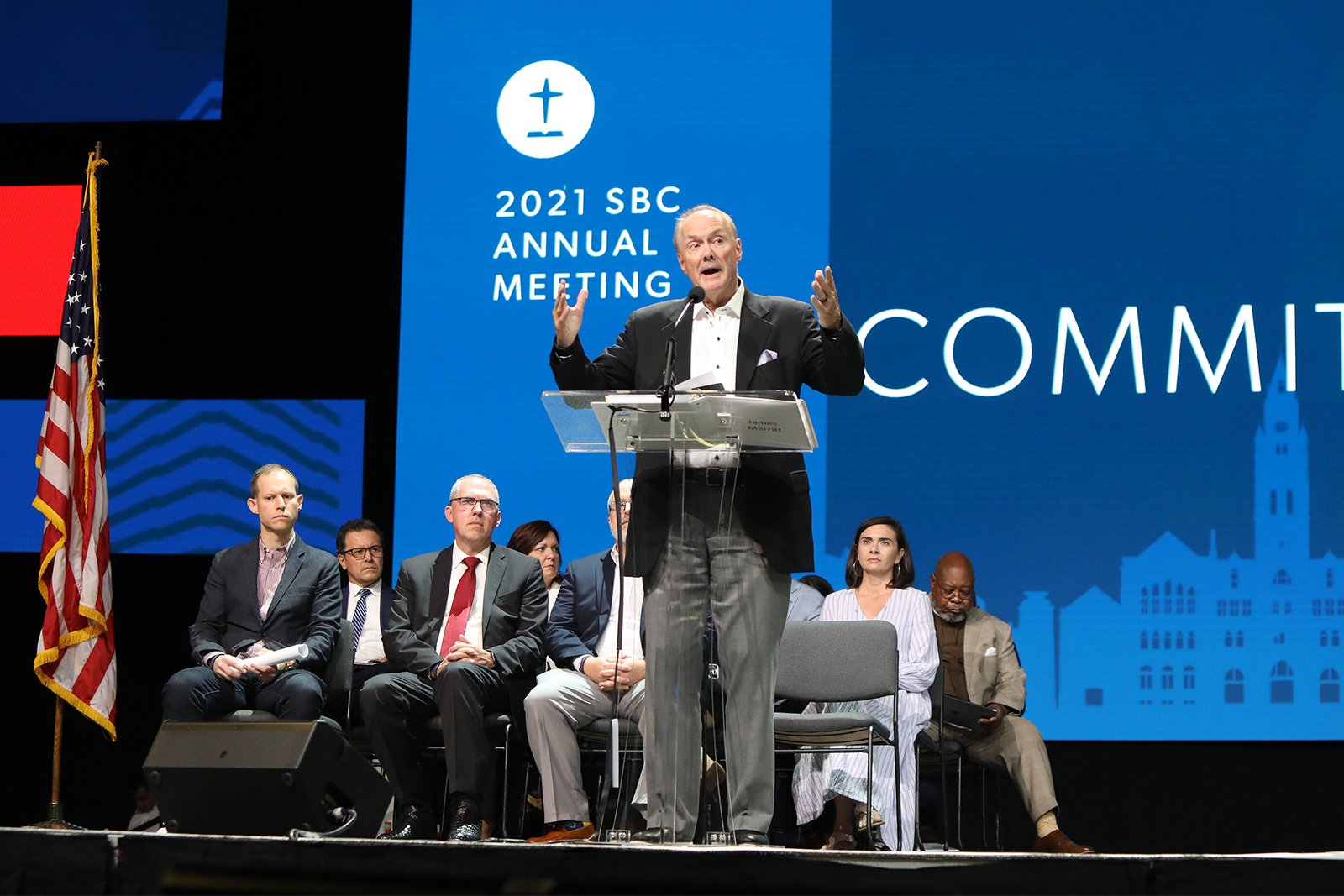 James Merritt, backed by members of the Committee on Resolutions, addresses the Southern Baptist Convention annual meeting June 15, 2021, in Nashville, Tennessee. A then-member of the committee, Bart Barber, with red tie, is now the committee chair. RNS photo by Kit Doyle

“I know that we can’t wave a magic wand and end the scourge of sexual abuse, which is honestly in all sectors of our society,” Barber said, “but we can keep from responding the way that some of those responses went in that Sexual Abuse Task Force report.”

He said he believes Southern Baptists meeting in Anaheim “are going to want to take action to keep this kind of thing from happening again.”

Besides running for SBC president, Barber is chairing the resolutions committee for this year’s SBC meeting and said his committee will be reviewing 30 proposed resolutions — nonbinding statements submitted by the messengers gathered for the meeting. The committee also could create additional ones.

Barber said he could not describe the topics covered, but he hoped the committee will not attempt, as has occurred in the past, to “bundle several resolutions together,” preventing a discussion of each one.

At the same time, he would like the committee to be “careful only to put on our plate what we can eat, only to bring out in the report a number of resolutions that we feel confident we can get all the way across the goal line.”

Some observers have said the SBC’s difficulty with dealing forthrightly with sexual abuse was driven by fears that bad press would inhibit giving to the Cooperative Program, the SBC’s unified budget. But Barber points to the fact that Southern Baptists donated more to the Cooperative Program in the months after messengers at last year’s meeting ordered the report on the Executive Committee.

In January, the denomination announced that the $21.1 million given to the fund, which primarily supports foreign and domestic missions, marked the second time it had surpassed $21 million in a single month over a 10-year period.

“They’re not unrelated,” Barber said. “Responding poorly to these questions damages our missions effort. Responding in a healthy way to them aids our missionaries.”

Barber also recognizes that sexual abuse isn’t the only issue Southern Baptists are concerned with, however. As the nation awaits the Supreme Court decision that could overturn Roe v. Wade, Barber said he expects Southern Baptists, whose first anti-abortion resolutions date to the 1980s, will need to do more than rejoice about a long-awaited victory.

He said his church has long distributed diapers, children’s clothing and other supplies, and Southern Baptists will need to enhance efforts to help “women who are in difficult circumstances who are giving birth to children.”