(RNS) — Robin Hadaway, a longtime expert on missions work, is keeping the focus on missionaries in his candidacy for president of the Southern Baptist Convention.

As he prepares to attend the denomination’s annual meeting June 14-15 just an hour’s drive from his home, Hadaway knows attention will be on the recommendations of a sexual abuse task force following a lengthy report on the Executive Committee’s mishandling of abuse allegations.

“They seem reasonable and wise, what they are recommending,” he said of the task force, including its suggestion that a national staff person — “or maybe more than one person” — be hired to determine what church or other entity is appropriate to respond to abuse allegations.

But Hadaway, who stated he was “troubled and saddened” by the report, also tweeted comparative Southern Baptist statistics in the wake of the report’s release:

SATF report troubling. SBC has about 14.5 million members. Total accused & convicted abusers over 20 year span – about 700 persons. This translates to about .00005 of our total membership. #RememberTheMissionhttps://t.co/pjqYEvSv38

Hadaway, 73, has long had connections with the major threads of Southern Baptist life and some of its key figures.

He and his wife, Kathy, were married at First Baptist Dallas by W.A. Criswell, longtime leader of First Baptist Dallas and one-time president of the denomination. Hadaway was ordained at Bellevue Baptist Church in Memphis, Tennessee, by Adrian Rogers, its prominent pastor and another one-time SBC president. In 2000, Hadaway was appointed to the SBC credentials committee by Paige Patterson when that longtime seminary leader — later ousted over mishandling rape allegations — was president of the convention.

After serving in the military, Hadaway was a pastor in two churches in the Western U.S. before moving abroad to work for 18 years as a missionary and missionary leader. He has served as professor of missions for a similar number of years at Midwestern Seminary, where he also was interim president and dean of students.

Asked about the pushback his June 3 tweet received, Hadaway stood by it.

“The number of abusers in my opinion, is relatively few considering the number of Southern Baptists that we have,” he said. “I would agree with some who have said one abused person is way too many. But I think that we want to be cognizant of the fact that a Southern Baptist church is one of the safest places you can be and around the most godly people that you can imagine. And I think sometimes we want to focus on the negative.” 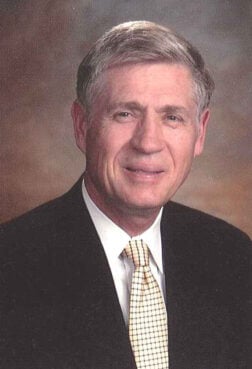 At a presidential candidates’ forum in May in Texas, Hadaway said: “We don’t want to minimize the suffering of these women.” He spoke, however, of his desire to maintain a balanced approach to addressing abuse claims.

“When I was regional leader and I was supervising 300 missionaries on the field, I investigated every case myself because it affected people’s careers,” he said at the forum at First Baptist Church Keller. “You want to be open with the abused, but you also want to make sure that someone is not being accused of being an abuser who really wasn’t. And that’s a real fine line. And I think we just need compassion and not condemnation in this area.”

In an interview, he said those responsibilities were his when he supervised missionaries in Brazil, Paraguay and Uruguay.

“The actual abuse allegations that came were very few and were concerning the nationals of a particular country,” he said, declining to state the South American nation where such an investigation occurred. “What happened in those couple of cases — those people ended up resigning from the mission field.”

Hadaway acknowledged hesitancy about spending millions that might have gone to support missions activities instead on reforms to avert abuse. But, he said, “In this instance, our church members and churches understand that we need to fulfill our obligations to carry on to implement the recommendations that the committee sees fit.”

As Southern Baptists and the rest of the nation await a Supreme Court decision that could overturn Roe v. Wade, Hadaway said the issue of making abortion illegal is personal rather than academic for him and his family because he has an adult daughter who is mentally disabled.

“She was that way from birth; we raised her on the mission field,” he said. “Those of us who have handicapped children, we love them and we would not want them to be any other way. We might wish they were normal, but we still love them. And so my wife went full term with our daughter. We were happy to welcome her into our family.”

Recalling learning of the Roe decision when he was stationed with the Air Force in Alaska, Hadaway said cultural issues are ever present, all the way back to biblical times. He noted accounts by the Apostle Paul in the New Testament books about the Corinthians and the story of Hebrew Bible figure Nehemiah who led the rebuilding of the walls of Jerusalem.

“Just as Nehemiah was on the wall with a sword and a trowel, you always have to be building,” he said. “And you also have to be fighting a spiritual warfare at the same time.”

This story has been updated to correct a link.