In 2019 the Houston Chronicle and San Antonio Express-News partnered on a series of investigative reports on sexual misconduct by Southern Baptists with formal church roles. Subsequently, the annual meeting of the SBC held in June 2021 voted to authorize an investigations firm, Guidepost Solutions, to conduct an independent probe of its executive committee and its handling of sex abuse. The report and the list of alleged offenders has recently been made public.

These deeply ingrained aspects of conservative white evangelicalism include “complementarianism,” or the patriarchal view that God gives authority to men and requires submission from women, and purity culture, an extreme version of sexual abstinence.

The SBC’s “True Love Waits,” a premarital abstinence campaign for teens launched in 1992, was an important component of the rise of purity culture. It was best known for the purity rings that girls wore as part of a pledge to their virginity to God and family.

More than merely the value of forgoing sex until marriage, purity culture centers sexual purity as a primary measure of the value of young women, who need to remain “pure” to attract a godly man in marriage. Sex education is virtually nonexistent, and dating is traded for “courtship” leading to marriage, under the authority of the girl’s father.

As author Linda Kay Klein writes in her book “Pure,” women are taught that they are responsible not only for their own purity, but for the purity of the males around them. Women are also made to believe that they are responsible if men are led to sin by what women wear. Additionally, they can be blamed for being inadequately submissive and for speaking up when they should be quiet. Women raised with these teachings also report experiencing tremendous fear and shame around issues of gender, sex and marriage.

The rhetoric of purity culture can be traced directly to the racist origins of the Southern Baptist Convention. The defense of slavery was the very foundation upon which the denomination was built, and the protection of the “purity of white womanhood” was a the justification for the perpetuation of white supremacy that outlived slavery.

How survivors described the abuse

Credibly accused men were protected by the SBC, while the women who dared to speak up were called sluts, adulteresses, Jezebels and even agents of Satan. For example, the report details the story of one woman whose abuse was mischaracterized by the SBC’s Baptist Press as a consensual affair and she was harassed online and called an adulteress. She ultimately lost her job at a Southern Baptist organization.

The report, which the former SBC leader Russell Moore calls “apocalyptic,” details harassment, insults and attacks on social media, some of which came from Baptist leaders to whom the women had been taught God required them to revere and submit. For example, the executive staff member at the center of handling abuse accusations, Augie Boto, characterized the survivors seeking justice as doing the work of Satan.

Survivor after survivor described their treatment at the hands of their own leaders as worse than their initial assaults. One survivor told investigators that when she provided details of her sexual abuse as a child among other things, one Executive Committee (EC) member “turn(ed) his back to her while she was speaking … and another EC member chortl(ed).”

“I ask you to try to imagine what it’s like to speak about something so painful to a room in which men disrespect you in such a way. … to speak about this horrific trauma of having my pastor repeatedly rape me as a child, only to have religious leaders behave in this way,” she said. 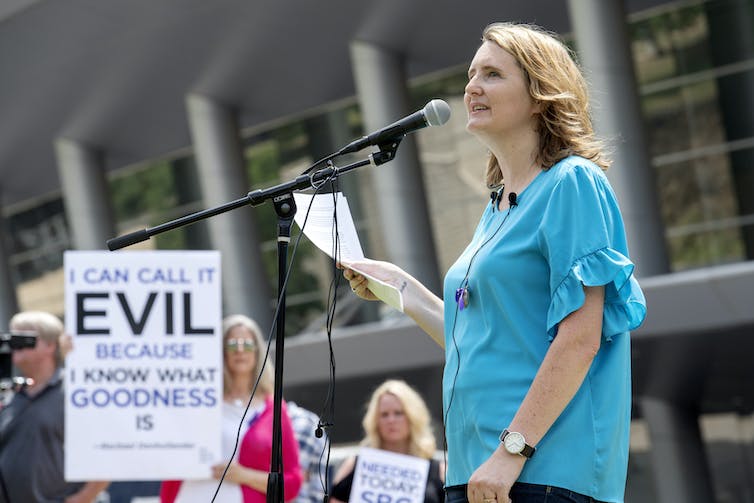 When victims are permitted to tell their stories to people in authority, it is likely to be an all-male committee including perhaps friends of the accused.

In such a hearing women – who because of purity culture practices have often been taught to always be modest and quiet in mixed company and may have had little to no sex education – are asked to detail what they often say is the most painful experience of their lives. Purity culture creates in women a strong sense of shame surrounding their bodies, their own sexuality, and sex in general. When they exhibit evidence of that shame it is taken as an admission that they share responsibility for the abuse.

Like their forebears before them who mobilized the mythic purity of white womanhood to shore up their power, today’s leaders at the center of this report remain male and overwhelmingly white. They use the language of purity culture to shame and silence women seeking justice while, at the same time, leading the charge in the fight against coming to terms with racism.

Can there be real reform?

The chairman of the SBC executive committee, Rolland Slade, and interim President and CEO Willie McLaurin said in a statement, in response to the report: “We are grieved by the findings of this investigation. We are committed to doing all we can to prevent future instances of sexual abuse in churches, to improve our response and our care, to remove reporting roadblocks.” Other Baptists too have expressed shock and anger at the revelations.

The Guidepost Solutions report concludes with a series of strategies such as forming an independent committee to oversee reforms, including providing resources for prevention and reporting of abuse. As helpful as these strategies may be, they don’t address how the underlying culture of the SBC continues to maintain the structures of white patriarchy.

(Julie Ingersoll, Professor of Religious Studies, University of North Florida. The views expressed in this commentary do not necessarily reflect those of Religion News Service.)