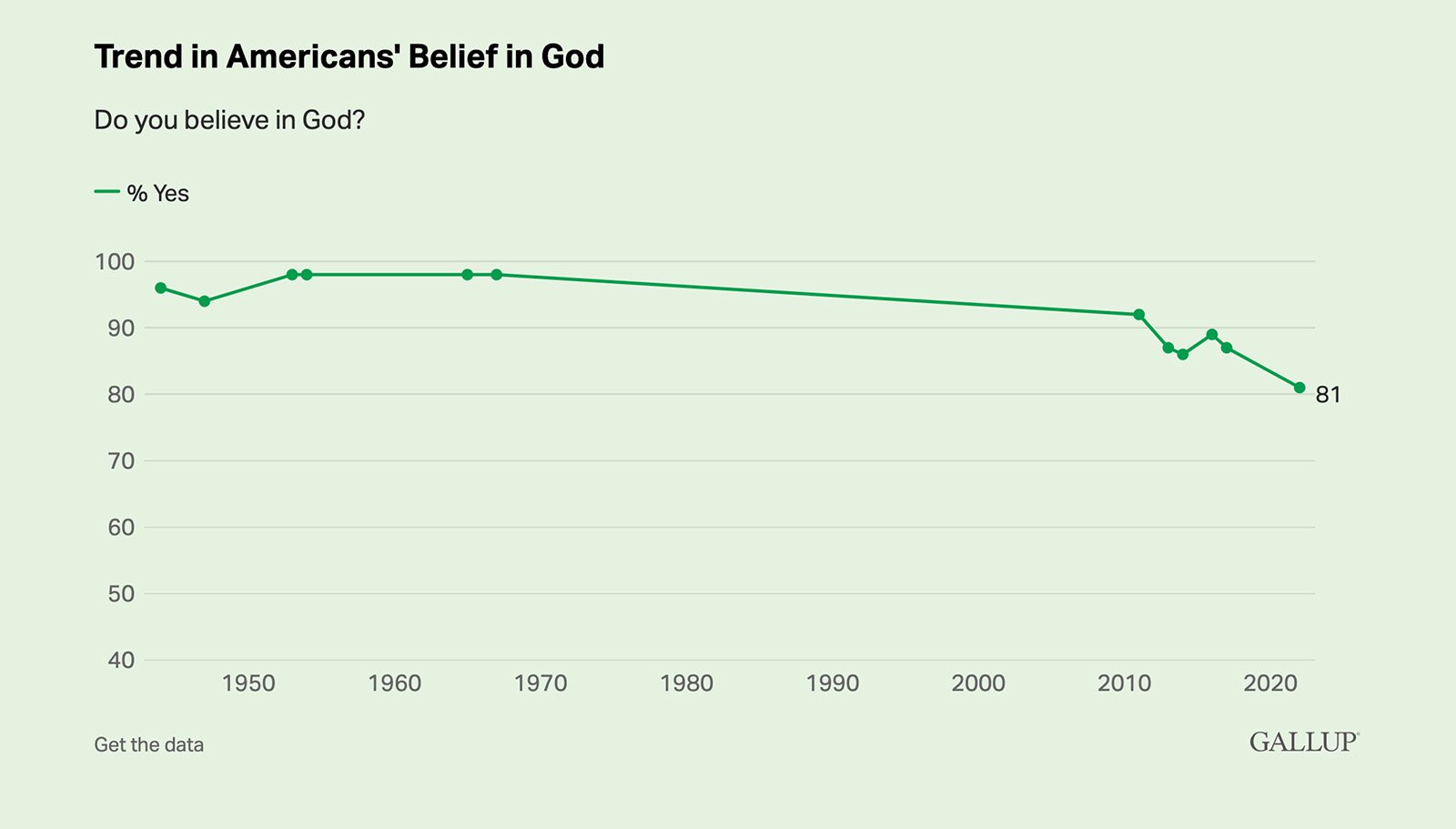 “Trend in Americans’ Belief in God” Graphic courtesy of Gallup

(RNS) — Belief in God has been one of the strongest, most reliable markers of the persistence of American religiosity over the years. But a new Gallup Poll suggests that may be changing.

In the latest Gallup Poll, belief in God dipped to 81%, down 6 percentage points from 2017, and the lowest since Gallup first asked the question in 1944.

Even at 81%, Americans’ belief in God remains robust, at least in comparison with Europe, where only 26% said they believed in the God of the Bible, and an additional 36% believe in a higher power, according to a 2018 Pew poll.

The latest decline may be part of the larger growth in the number of Americans who are unaffiliated or say they have no religion in particular. About 29% of Americans are religious “nones” — people who describe themselves as atheists, agnostics or “nothing in particular” when asked about their religious identity.

“Belief is typically the last thing to go,” said Ryan Burge, assistant professor of political science at Eastern Illinois University. “They stop attending, they stop affiliating and then they stop believing.” Less surprising, the Gallup survey showed belief in God has fallen most among younger Americans. Only 68% of adults ages 18-29 said they believed in God (compared with 87% of Americans age 65 or older.)

The poll also found that belief in God is higher among married people (compared with those who are not married), women (as opposed to men) and those who did not go to college (versus college graduates).

But perhaps the most striking differences were in political ideology. Belief in God is correlated more closely with conservatism in the U.S., and as that gap widens it may be a contributor to growing polarization. The poll found that 72% of self-identified Democrats said they believed in God, compared with 92% of Republicans (with independents in between at 81%).

In recent years there has been a rise in the number of Americans who acknowledge being Christian nationalists — those who believe Christian and American identities should be fused.

“It could be that the increase in the number of atheists is a direct result of Christian nationalism,” said Ryan Cragun, a sociologist at the University of Tampa who studies the nonreligious. “They seem to be dominating the rhetoric. I wouldn’t be surprised if there is legitimately backlash against it and people saying, ‘You know what? I’m an atheist.’”