LOS ANGELES (RNS) — About half of Jewish households in Los Angeles include an immigrant to the United States or someone whose parent is an immigrant, according to a new demographic report released by the Jewish Federation of Greater Los Angeles. These Jewish immigrants to the Golden State come from a range of countries, including Russia, Israel, Iran, Europe and across Latin America.

“L.A. has always been, as West Coast Judaism has been, more diverse than Jewish life on the East Coast,” said Rabbi Noah Farkas, chief executive officer of the Jewish Federation of Greater Los Angeles.

The Eastern European Jewish experience, Farkas said, has been centered for a long time, but L.A.’s Jewish population shows “those communities are rising in both their experience and their engagement with Jewish life.”

“The trend that we’re seeing really previews the future diversity of the Jewish community. So what happens here, and is cutting edge here, will lead the cultural evolution of Jewish life across the country,” Farkas said. 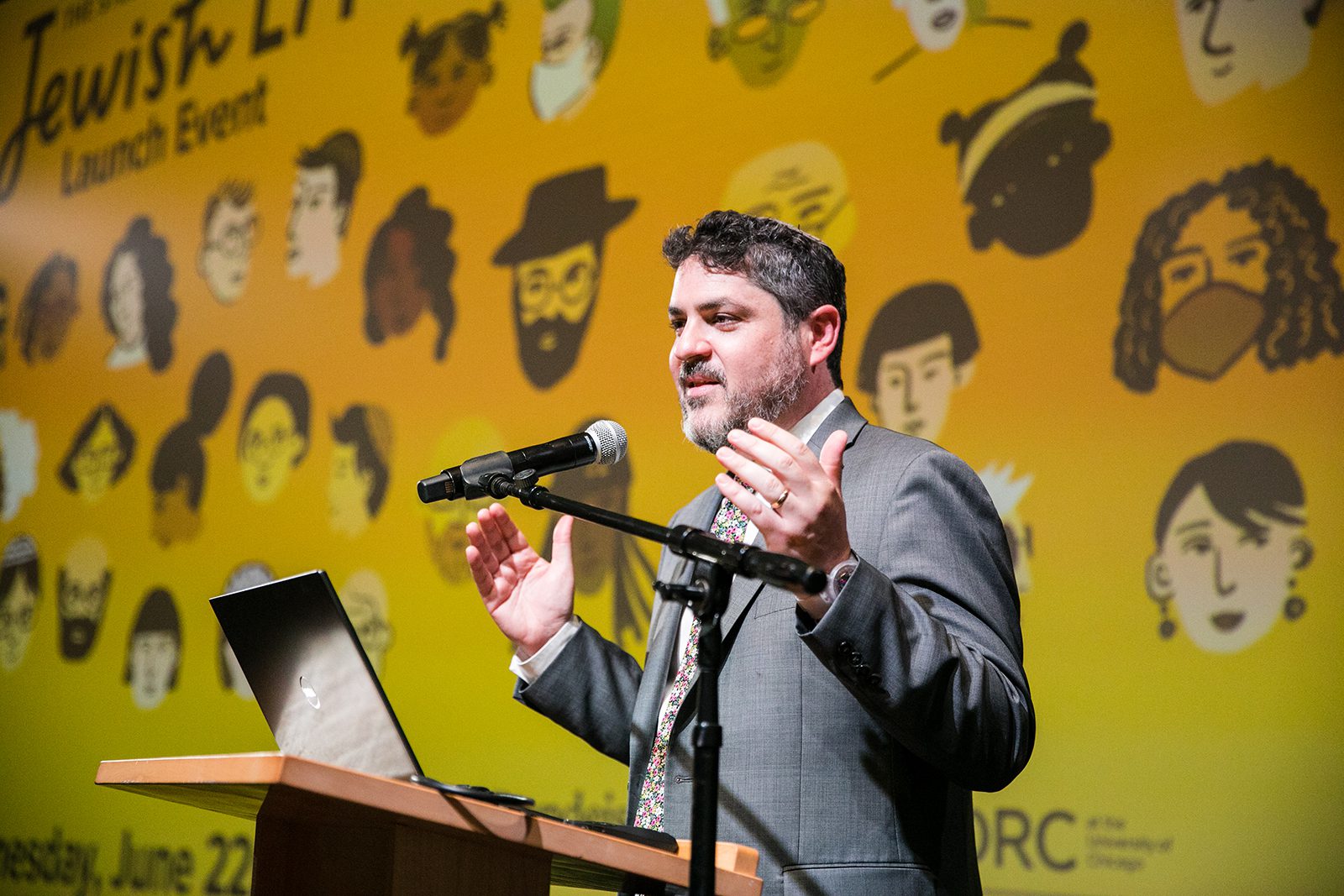 The 2021 Study of Jewish L.A. comes 25 years after the last L.A. Jewish community study published in 1997. It’s based on data collected from 3,767 households between June and September 2021. Participants completed the survey online or by phone.

The study — conducted by Brandeis University’s Cohen Center for Modern Jewish Studies and the University of Chicago’s National Opinion Research Center — will be released in four phases, with the first report published Wednesday (June 22).

Researchers found there are more than 560,000 Jewish people in Los Angeles, the second largest Jewish community in the U.S., making up 294,200 Jewish households in the city. This represents a 25% growth of Jewish households since 1997, the report found.

The report notes that 61% of L.A.’s Jewish households include a married or partnered couple. Among those couples, 43% are with another Jewish person and 57% with someone who is not Jewish.

“Close to half of the households that are currently financially struggling report that
their financial situation has worsened since the pandemic began,” the report highlights. 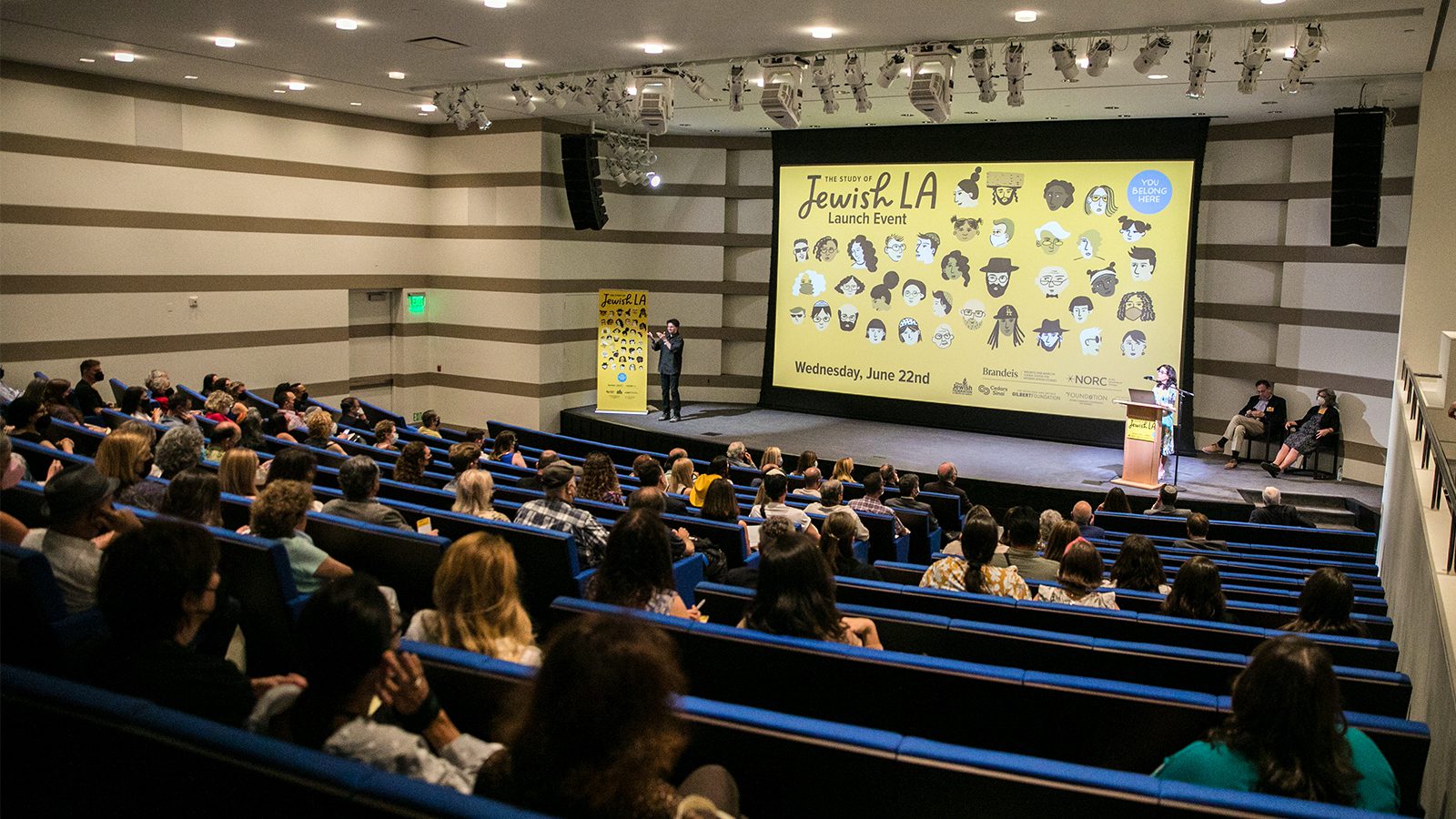 The report shows 8% of Jewish adults in L.A. identify as LGBTQ, and 14% of Jewish households have a member (who may or may not be Jewish) who identifies as LGBTQ. Nationally, 4% of U.S. Jewish adults identify as gay or lesbian, and another 5% describe themselves as bisexual, according to the report.

Additionally, 6% of L.A. Jewish adults identify as a person of color. More than 60% who identify as such are age 40 or younger.

“These age patterns suggest that the racial diversity of the L.A. Jewish community is likely to increase over time,” according to the report.

The study highlights that L.A.’s Jewish community is not only diverse when it comes to ethnicity and race, but also when factoring Jewish behaviors, attitudes and beliefs.

Among all L.A. Jewish adults, the majority believe leading a moral and ethical life (69%), connecting family and traditions (62%), and working for justice and equality (54%) are essential to being Jewish.

Israel is also central to their identity, according to the report.

More than half of L.A. Jewish adults have been to Israel and feel at least somewhat attached to Israel, and 80% see Israel as an important or essential part of being Jewish, the study found.

The report noted that “attitudes about Israel are controversial for some L.A. Jews and can lead to feelings of alienation from the Jewish community.”

The Jewish Federation of Greater Los Angeles partners with Birthright Israel, an organization that offers free educational trips to Israel for young adults to “discover Israel and explore your Jewish identity, whether it be cultural or spiritual.” In recent years, Birthright Israel has been a target of protest, with some Jewish activists saying the trips erase Palestinians living under occupation in the West Bank.

The report also found that half of all L.A. Jewish adults have no denomination and identify either as secular/cultural Jews or as “just Jewish.” One-quarter of Jewish adults in L.A. live in households in which someone is a member of a synagogue, congregation or other Jewish worship community, which the report notes is significantly lower than the national average. 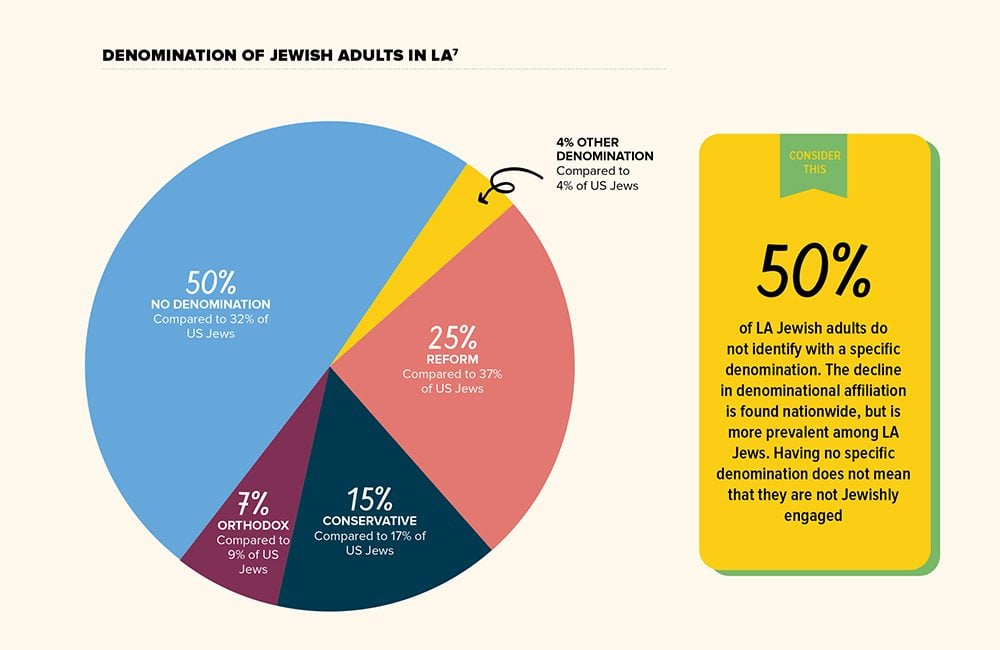 To Farkas, it was revealing to see the level of Jewish engagement among younger people. The study’s “Index of Jewish Engagement” factors in not only denominational and synagogue affiliation, but also the participation of Jewish rituals, like Shabbat, and the expression of Jewish practices through the arts and clothing.

More than half of Jewish adults ages 22–30 talk about Jewish topics frequently, and almost one-quarter read, watch or listen to Jewish-themed books, films or music frequently, the study found.

However, the report also highlights that one-quarter of Jewish adults who are between 55 and 64 years old are “minimally involved” with Jewish activities, as are 30% of those ages 65–74 and 39% who are 75 and older.

Farkas said the federation needs to “focus some energy” on that segment of Jewish Angelenos.

“They’re still relatively young in terms of their life span. Maybe they finally have more time because they’re exiting the crush of child rearing … to explore Jewish life differently,” he said.

The role of the federation, said Farkas, is to help synagogues and other legacy institutions shift their “models to meet the new emergent trend in Jewish life.” This data will help do that, he said.

“We care about those traditional institutions. They’ve been a hallmark of Jewish life for thousands of years,” Farkas said.