(RNS) — The Rev. Jerry Pillay, the Presbyterian minister elected general secretary of the World Council of Churches last month, is taking the helm as the global ecumenical organization is already under pressure to expel the Russian Orthodox Church from its ranks due to Patriarch Kirill of Moscow’s justifications for his country’s brutal invasion of Ukraine.

But that’s not the only controversy the new leader is facing: Pillay has come under fire since his election for past comments comparing the Israeli government’s treatment of Palestinians to his native South Africa’s former apartheid policies.

Pillay, a former general secretary of the Uniting Presbyterian Church in Southern Africa, rebuffed the criticism, saying in a recent interview with Religion News Service that the pressure “comes with the territory.”

Pillay said he plans to tackle the issues facing the WCC head-on when he assumes office at the beginning of next year. “At the end of the day,” he said, “our task is to proclaim God’s name.”

What are your reactions to your election?

This has been a really great excitement for me. The WCC played a pivotal role in South Africa in the dark days of apartheid. If it was not for the involvement of such ecumenical bodies, we would not have had so much international pressure on the South African government. So for me to be elected into that position is just a joy to, in a sense, give back in thanksgiving, joyfully recognizing the role that the WCC played in our own context.

What do hope to accomplish? Are there any projects that you’re particularly interested in pursuing?

The WCC is an admittedly very wide scope of different churches with a great sense of diversity, with doctrines and theology and views on ethics and so forth. One of the greatest priorities is to work toward the unity of these churches, so that we can indeed create a visible unity to the world in terms of a united Christian witness.

So my first task would be to continue the work of bringing churches together, to seek in unity of churches, to identify and address the major global issues. Things like poverty, things like HIV and AIDS, things like the pandemic, war and conflicts.

The second thing is justice issues. Justice is an important priority for the WCC. What is happening, where is it happening, and how do we speak to it? Where is human dignity at stake and at risk? Where are human beings oppressed and disadvantaged, whether it is through political structures, economic structures — religious structures in that too — and social structures. How does the World Council of Churches actually work toward liberating people and setting them free, as Jesus would say, in his own ministry, “I’ve come to set the captives free”?

Your election was criticized by some Jewish voices because of your past writings about the Israeli government’s treatment of the Palestinians. They point to a 2016 paper in which you made positive references to the controversial boycott, divestment and sanctions movement and compared the Israeli treatment of Palestinians to apartheid. Do you have a response?

Let me put that in context: A group of church leaders from South Africa went to try and understand the Israel-Palestine conflict situation, and a number of those church leaders were Black church leaders — prominent Black church leaders in South Africa. We went to the Israeli side and the Palestinian side. We spoke to numerous people, including pastors, rabbis, local people and politicians, to get deeper insight into what was happening. We came back and wrote a response to what we had seen, heard and felt ourselves. The majority of Black pastors — and I was quite surprised by this — actually said, “You know, this is worse than apartheid,” from what they had experienced. Then we put together a collective statement.

The 2016 article was an academic article trying to capture those experiences and put them in context. The references and comparison of Israel and apartheid in South Africa were not words from my own mouth — they were academic references. If you went and read the article, for example, you will see it quotes the United Nations and their declaration of the apartheid state in Israel. 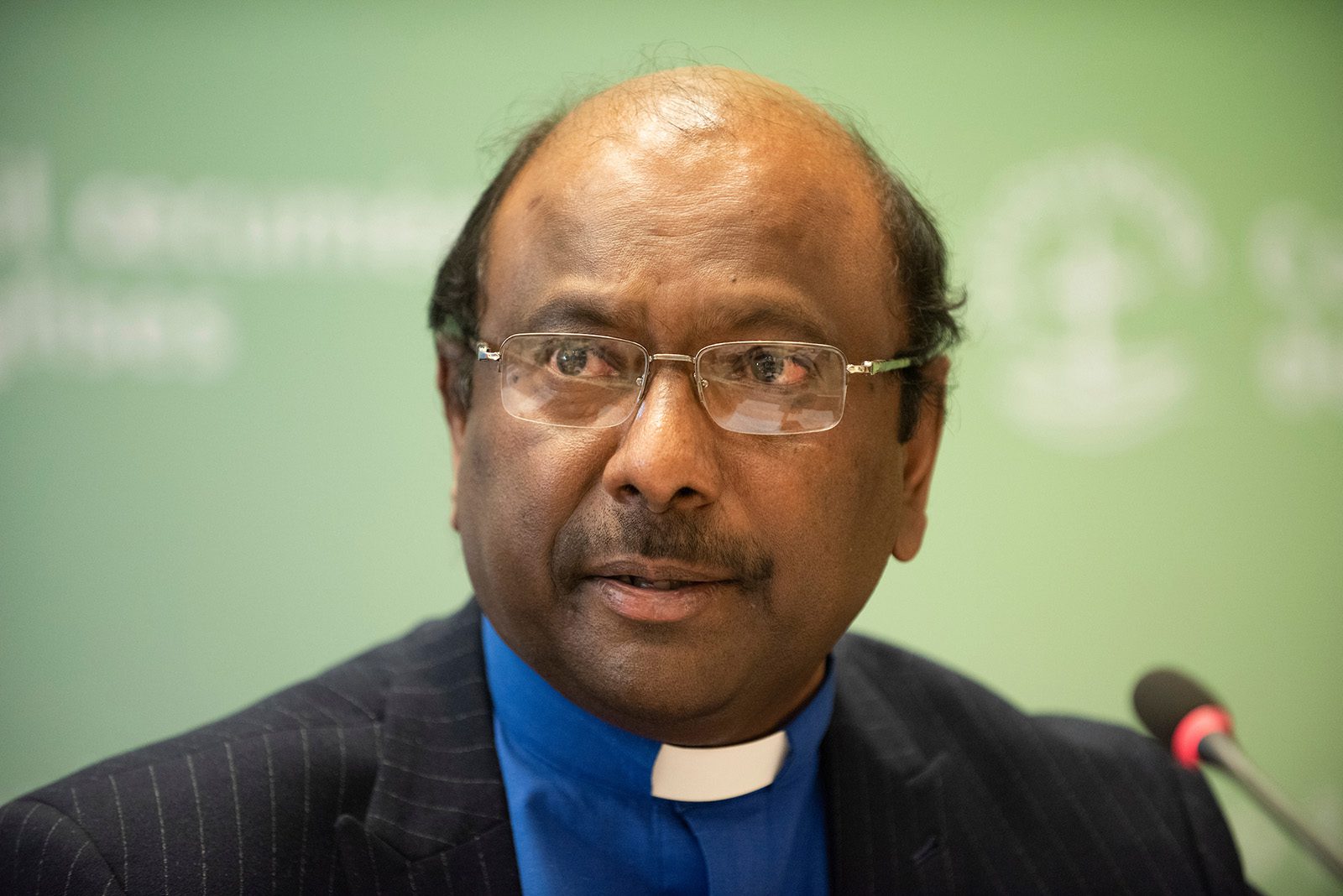 The Rev. Jerry Pillay, the incoming general secretary of the World Council of Churches, on June 17, 2022. Photo by Peter Williams/WCC

I’m not a politician, and I did not read things in a political light. Mine was an introspection from a biblical perspective on justice, (and) what I saw from a justice point of view did not sit well with me.

Unfortunately, particularly right-wing Jewish media took (the article) and, instead of actually focusing on the justice issues of Israel and Palestine, simply attacked me as being anti-Jewish and antisemitic — which is totally unfounded.

So what are your views on the boycott, divestment and sanctions movement directed at Israel?

From a justice point of view — and again, I want to reiterate this aspect, not from a political point of view — the call for sanctions and boycotts in the apartheid South Africa certainly did bring the dismantling of apartheid in our country. There’s no question about that. So in my opinion, when I wrote in 2016, I basically was saying that boycott, sanctions and disinvestment could be an option. I was not necessarily calling for that. It probably still is an option to solve the crisis in Palestine and Israel. But it’s not something that I’ve openly advocated over the years.

Do you stand by your comparison of the Israeli government’s treatment of the Palestinians to apartheid?

In the context of Israel-Palestine, obviously Jewish people make claims in terms of Zionism, and the right to retain their culture, identity and religion — I have no objections to that whatsoever. But when we’re using that to oppress other people, at the expense of other people’s justice, then the world needs to shout. Churches need to rise up, say quite strongly in the name of God, that such things are not actually acceptable.

Remember, going back to the apartheid context, we had a so-called Christian government, and we had churches that were justifying apartheid. Churches stood up and said, ‘No, that’s not the same God we talk about.’

Whether it is in the Torah, the Quran or the Bible, we need to think about a God of justice and love.

Have you reached out to your critics? Are you concerned about how it will impact your tenure as WCC president?

I would be very willing to reach out to any groups to discuss this. But to be honest with you, most of these newspapers are really aiming to to smear me. I do give credit to the Jewish paper in South Africa — they actually took the time to ask me for a comment. Unfortunately, they ended the article quoting from a Zionist Christian, a conservative Christian, who basically was crushing me again. But I expected this, because this is a big issue in terms of Israel-Palestine.

The WCC has made some very strong statements with regards to Israel and Palestine. My position does not necessarily conflict in any way with what WCC has been saying over the years.

There has been debate whether the WCC should expel or suspend the Russian Orthodox Church. The current general secretary has indicated he would not support such a move. Would you?

The war in Ukraine and Russia is obviously sad and unnecessary. Nobody can actually condone any war, whatever kind, for whatever reasons. The WCC has been quite vocal about that. Personally, that will be my view.

But in terms of suspending the Russian Orthodox Church: Suspension of a church, any church, must be one of the last resorts.

What do you wish people understood about the work of the WCC?

(The WCC has) been accused of not playing a role adequately by people in particular given context. … Equally, unfortunately, there are some people — some Christians — who come from a very strong conservative, right-wing kind of approach who see WCC as a political body. They tend to demonize it, as if it’s not ever doing God’s will in the world. That is a total, total misconception.

But I think if they can see that the WCC has been willing to get its hands dirty, willing to talk about the hard issues and willing to actually understand what God is saying to us as Christians, then they will see a new appreciation of the WCC.