(RNS) — Last Wednesday (June 29) I addressed the International Religious Freedom Summit in Washington, a bipartisan human rights gathering that continues an effort begun under the State Department’s auspices during the Trump administration to guarantee religious rights for all.

I had come quite a long way. I am a recovering angry atheist who grew up being targeted for my beliefs by my evangelical Christian neighbors. In return, I thought religious believers should be marginalized — barred from teaching in public school, for one thing. I studied the history of persecution of heretics and justification of coercion, hoping to show Christian hypocrisy to the world.

That discrimination I was subjected to was wrong, but so was my response that religious people should lose their rights. My studies led me to realize that if I wanted the freedom not to believe, I personally needed to make possible someone else’s rights to believe.

RELATED: Saudi Arabia again leads interfaith understanding — this time on its own soil

This is how I ended up as associate director of the Aspen Institute’s Religion & Society Program, which supports projects that bring religiously and ideologically diverse communities together. Asma Uddin, a Muslim lawyer who protects the religious freedoms of conservative evangelicals in America, is our program’s fellow on religious freedom. Her work helps two communities with seemingly endless differences see one another more clearly, and make possible for one another the religious freedom the Constitution affords them equally.

This is what supporting the free practice of religion looks like.

But there’s nothing really “pro-religion” about those decisions. Instead, the court is showing a tendency to prefer Christianity over other religions. Our culture’s tendency is to see “religion” and think “Christianity.”

Religion isn’t necessarily Christian, or “pro-life” or “pro-prayer-in-schools” or “conservative.” Media outlets that adopt that language obscure and erase the beautiful, rich, conflicting and human experience of religious belief, behavior and belonging in this country. The label only leans into the “us versus them” mentality of our polarized moment, amping up our political and social distress.

Let’s do this differently.

While many Christians celebrated the Roe v. Wade ruling, others mourned it. Many from other faiths, including Islam, Judaism, Hinduism, Buddhism and more, have shared diverse reactions to the ruling based on their religion. All of these traditions are internally diverse in their belief, culture and social and ideological stances. None are unanimous in their views on abortion.

Americans who are Christian, agnostic, Sikh, Indigenous, atheist, Buddhist, Muslim, Jewish and much more should all have equal ability to bring their faith or values into the public square. We should all also be granted the dignity by both the Supreme Court and news outlets to be “religious,” even if we aren’t Christian.

Religion, and those who do or do not believe in it, cannot be reduced into a “pro” or “anti” issue framing. Perpetuating that framing, and ignoring the nuance of belief, makes discrimination against religious minorities more likely. This “us versus them” framing obscures the responsibility we the people have to stop diminishing the rights of others in order to protect ourselves.

Let’s flip the script. We have an opportunity to make possible for one another the religious freedom rights we want for ourselves. That’s a big piece of “religious pluralism,” a vision of the world in which religious and nonreligious people thrive, respecting and engaging together across beliefs. This isn’t a utopian dream, and my own story shows we can get there. 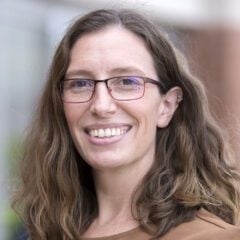 Our current approach, the culture of conflict, isn’t working. We can create a generous culture of freedom. I work to make that freedom possible for you, no matter your religious community or tradition, even if it means I give you the freedom to believe I am going to hell. Today, I ask you to turn to your neighbor — your Orthodox, Buddhist, agnostic, Catholic, Muslim or Baha’i neighbor — and give them exactly the same religious freedom equally.

(Allison K. Ralph is associate director of the Aspen Institute’s Religion & Society Program. The views expressed in this commentary do not necessarily reflect those of Religion News Service.)