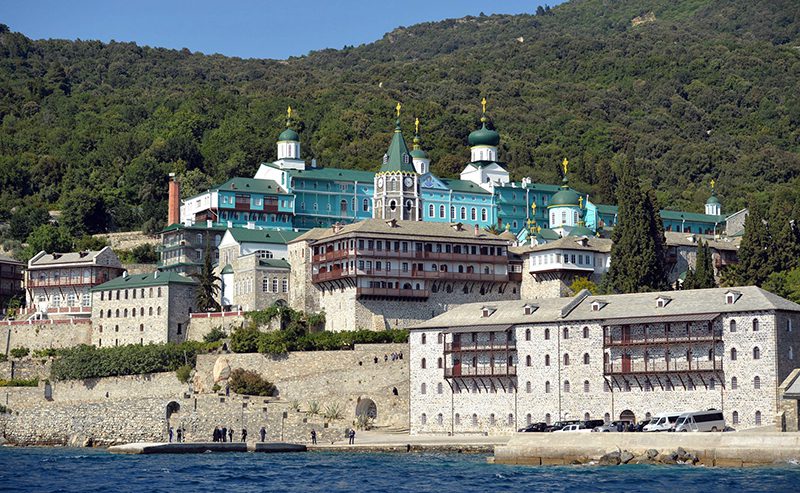 (RNS) — In the Orthodox Christian world, few places are better known or more lovingly venerated than Mount Athos, the 10th-century Greek monastery legendarily dedicated to the Virgin Mary. Composed of 20 citadels scattered over a peninsula of exceptional beauty in northern Greece, boasting magnificent manuscripts and icons, Athos is home to some 2,000 monks. Among them, as in every society, there are saints and sinners, sane and strange. I have visited countless times and have been blessed to engage with some of its more godly ambassadors.

Women are prohibited from visiting Athos. So too are female animals and beardless young boys, who could be mistaken as feminine. This has been tradition for 1,000 years. In its most recent announcement, its mission statement asserts: “Athos is a place of prayer and discipline, with an uninterrupted continuity of liturgy and spirituality, humbly interceding for the whole world and all people without discrimination.”

So I was surprised last week to see that Athos’ highest administrative authority, the Holy Community, had issued a public announcement on the nature of family. The previous week Religion News Service had published my defense of the decision by the Archbishop Elpidophoros, the head of the Greek Orthodox Church of America, to baptize two children born to a gay couple via surrogacy.

I wasn’t surprised that the Holy Community commented: My op-ed seemed to have touched a nerve, drawing countless passionate responses. Most of the comments regrettably missed the point — namely, our hypocrisy in conversations about homosexuality. I was predictably excoriated as progressive or pro-gay. I wonder whether the feedback would have been as vocal had I written about social injustice, corporate greed, climate change or the ongoing genocide between two traditionally Orthodox peoples in Ukraine — for which the world still awaits denunciation by Russian Patriarch Kirill, who continues to incite bloodshed, on the pretext that one side promotes gay pride parades!

Like these other commenters, the monks of Mount Athos avoided the essence of the archbishop’s actions and my op-ed, which primarily concerned the baptism of two children and had little to do with family. Nevertheless, the monks asserted in their letter that “there is no other kind of family except that established by the Sacred Gospel.” And this was the real cause for my surprise. 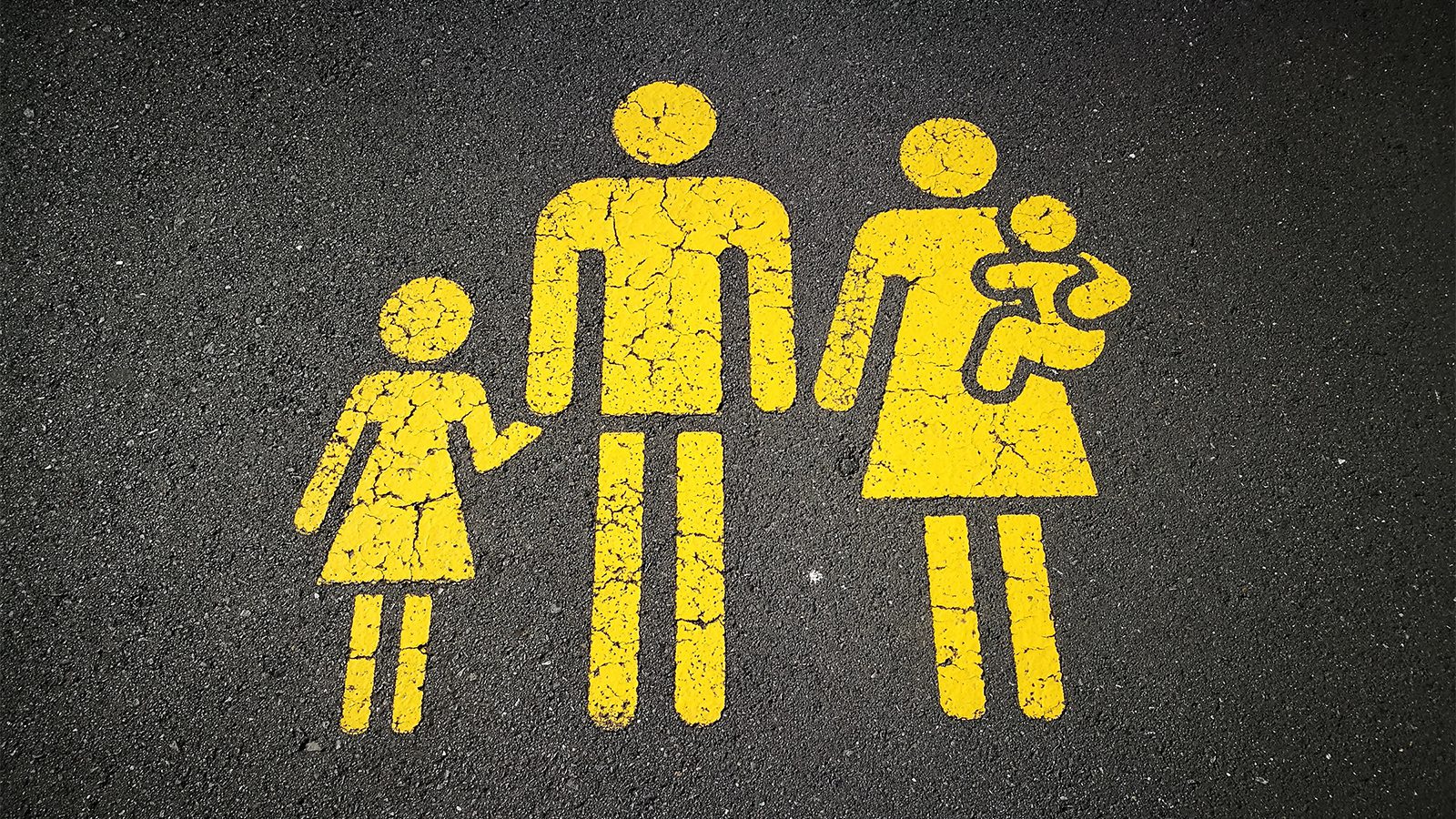 First, because Mount Athos does not routinely publish statements, particularly on how Orthodox Christians should lead their worldly lives. Whenever it has deviated from this convention in recent years, its statements were either narrow-minded (voicing its resistance to ecumenical dialogue and a papal visit to Greece) or halfhearted (as in its response to the current war in Ukraine). But, after all, speaking on secular affairs is not what monks are expected to do, which is to burn like living torches of prayer for the world.

There have, of course, been notable exceptions of gifted writers expounding spiritual principles. St. Nikodemus of Mount Athos, the 18th-century editor of The Philokalia, is a case in point. I am not a monk, and may well be mistaken, but I believe the primary purpose and principal role of monks is to pursue “the one needful thing,” as the Gospel of Luke puts it, by serving as models of repentance and holiness.

Second, monks are neither secular clergy nor married laity. Rare exceptions notwithstanding, monks do not have experience in paying a mortgage, sustaining a loving marriage or raising children. They cannot appreciate what is involved in earning a salary, supporting a family or paying taxes. They do not know the complexities of being single or divorced.

What little they know of marriage and family usually comes from counseling individuals and households “in the world,” as they sometimes condescendingly brand society. Hence, monks would have much to gain by refraining from predications on marriage and family — just as bishops would do well to heed the counsel of married men and women before imposing cumbersome injunctions. This would enrich monks and bishops alike.

Third, though the monks of Mount Athos base their understanding of family on the Gospel, they would surely strain to discover in the Gospel any elaborate teaching about the family nucleus or approved adoptions. What is decisive for identity and vocation for Christ and the Gospel is “birth from above,” as we hear in the Gospel of John, and not biological birth.

The literature of the early church fathers is similarly reticent on marriage and family. A mere glance through G.W.H. Lampe’s classic “Patristic Greek Lexicon” does not reveal a single entry for “family.” In fact, the concept of a nuclear family bedecking the front pews on Sunday morning is never a preoccupation or priority. This is why the Orthodox Church has always been uncomfortable with any adoration of the Holy Family. The premise of Scripture and promise of the church lies first and foremost in community and Communion, not conventional or social constructs of marriage and family. 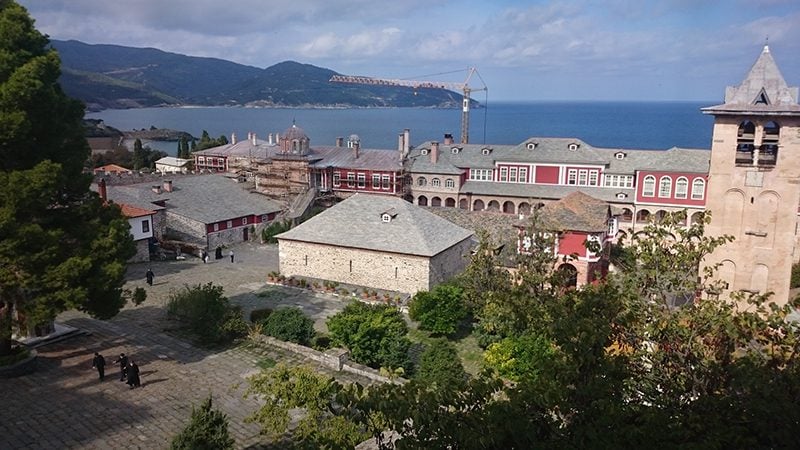 The Holy and Great Monastery of Vatopedi on Mount Athos. Photo by Ratsas/Wikipedia/Creative Commons

Monasticism — consummately committed to and literally abiding by Christ’s injunction to “hate one’s father and mother, wife and children, brothers and sisters, even one’s own life” — may in some ways be construed as the extreme aberration of marriage and supreme deconstruction of family. Mount Athos itself presents diverse forms of familial configurations that challenge the traditional notion of family — to which our Lord too did not conform absolutely, born to an unwed virgin mother.

Monks, in short, should not pontificate that “there is no other kind of family except that established by the Sacred Gospel.” It is equally dangerous to idolize celibacy and idealize family. What Scripture emphasizes is that “in the resurrection, people neither marry nor are given in marriage, but are like angels in heaven.” And the very existence of monasticism is a prophetic reminder of this reality.

Finally, monks are “angels in heaven” but not on earth. As such, they should focus on personal and collective transformation as a community set apart for self-reflection. In an age where abuse of authority — spiritual, physical and sexual — is severely scrutinized, monks might consider the impact of their actions and advice on individuals and families that deferentially honor them. It would behoove them as well to note the recent letter by the Church of Greece about the perils of pseudo-prophets and self-proclaimed teachers.

Monasticism receives and welcomes “all people without discrimination” as members of Mount Athos’ community and citizens of its polity. It should reflect the same openness and inclusiveness in its relations to the outside world without releasing empty, exculpatory slogans. While it may be tempting for Mount Athos to adopt positions on contemporary issues, it ultimately offers more through the silence and restraint attending a life of retreat and renunciation.

(The Rev. John Chryssavgis is archdeacon and theological adviser to the Greek Orthodox Archdiocese of America and honorary professor at the Sydney College of Divinity. The views expressed in this commentary do not necessarily reflect those of Religion News Service.)