(RNS) — Not long after Russia’s invasion of Ukraine in late February, Orthodox Jewish Rabbi Yonatan Neril found himself surrounded by 25 different religious leaders, including bishops, rabbis and sheiks, in Jerusalem’s Moscow Square as he affixed a letter calling for peace to the wall of the Russian Orthodox church.

The letter, signed by more than 150 religious leaders worldwide, including the Dalai Lama, called on Patriarch Kirill, the leader of the Russian Orthodox Church who has close ties to President Putin, to implore the Russian president to de-escalate the armed conflict and seek peace.

“In this moment, religious leaders are called to rise to the occasion on behalf of God, people, and all creatures,” read the interfaith letter Neril placed in Moscow Square.

Nearly six months later, the war in Ukraine rages on, bringing with it a growing list of both humanitarian and ecological concerns ranging from massive grain shortages to recent shelling around Ukraine’s largest nuclear power plant.

Neril is concerned about both. He is the founder and executive director of the Interfaith Center for Sustainable Development — a Jerusalem-based nonprofit engaged in revealing the connection between religion and ecology worldwide — and co-author of the best-selling Eco Bible, an ecological commentary on Hebrew Scripture.

“God is life,” Neril told RNS in a recent interview. “We exist because every moment God is reinvigorating creation with life.” Neril also spoke with RNS about the spiritual crises he sees at the root of both ecological degradation and warfare, and the role religion can play in response.

During the Global Bildung Network festival earlier this year, you said, “We can’t have ecological sustainability without spirituality.” Can you explain that connection?

The ecological crisis is a spiritual crisis. It’s not just about nature and bees and the birds and the trees and the toads. It’s also about human beings and how we live as spiritual beings in a physical reality. And so, you know, with all due respect to Elon Musk and everyone buying a Tesla, we’re not going to curb climate change with Teslas alone — when the operating system of billions of people is consumer-driven.

The only force in the world that changes this operating system of consumerism is religion and spirituality. The root issues we’re talking about are greed, short-term thinking, egoism, seeking pleasure in the physical.

The spiritual solutions to those are humility, long-term thinking, caring for other people and creatures. The only institutions in the world that can deliver that are religious institutions. Rabbi Yonatan Neril, standing, addresses The Interfaith Climate and Energy Conference, one of many stops Neril has made on speaking tours. Photo by Mariona Bonsfills/Wikipedia/Creative Commons

Why not just focus on composting? Why bring God or the Divine into the environmental conversation?

Scientists can’t promote this transition. And politicians can’t do it either. And business people also, I don’t think can do it. The transition that I’m thinking about — a spiritual ecological transition — it is about composting and it’s about clergy speaking from the pulpit about composting and it’s about that push being part of religion. But it’s, at a deeper level, about finding the center of our pleasure satisfaction in family and community and spirituality instead of finding that in fast food, new smart phones and cheap airplane travel.

You have also emphasized that we can’t have ecological sustainability without peace. Do you think there is a way of understanding war as part of a consumerist mentality?

Yes. Or another way of phrasing it would be an ‘expansionist mentality.’ Which is a related topic I also occasionally speak about. I think we need a transition within religion from religions trying to expand their base of followers.

Pope Francis talks about ecological conversion — of how essentially we need to transition to an ecological lifestyle. And I think it’s important that religions transition today to focus on that instead of focusing on trying to win more adherents to their particular religion.

At the end of the day it doesn’t matter how many people of each religion there are in the world if we don’t have a sustainable planet, because we’re all going to be held accountable by God for destroying the planet. It’s not like the “game ends” and the religion with the most numbers of adherents wins. The religion with the most number of adherents on a destroyed earth loses, together with every other religion.

So how might we more fully understand connections among religion, ecology and war?

With the fighting around Europe’s largest nuclear reactor right now, we’re not just talking about Cain and Abel where Cain has a rock and he’s killing his brother. We’re talking about 8 billion people, all species that God created, and if something goes wrong, there could be a nuclear explosion. Or there could be a nuclear conflict between Russia and other nuclear powers. And so everything is at stake here.

We need to raise our level of spiritual awareness. It doesn’t matter whether Russia has more territory. It doesn’t matter that the Russian Orthodox Church has more faith adherents. What matters is doing what is right and proper in the eyes of God, to quote a verse from the book of Deuteronomy. 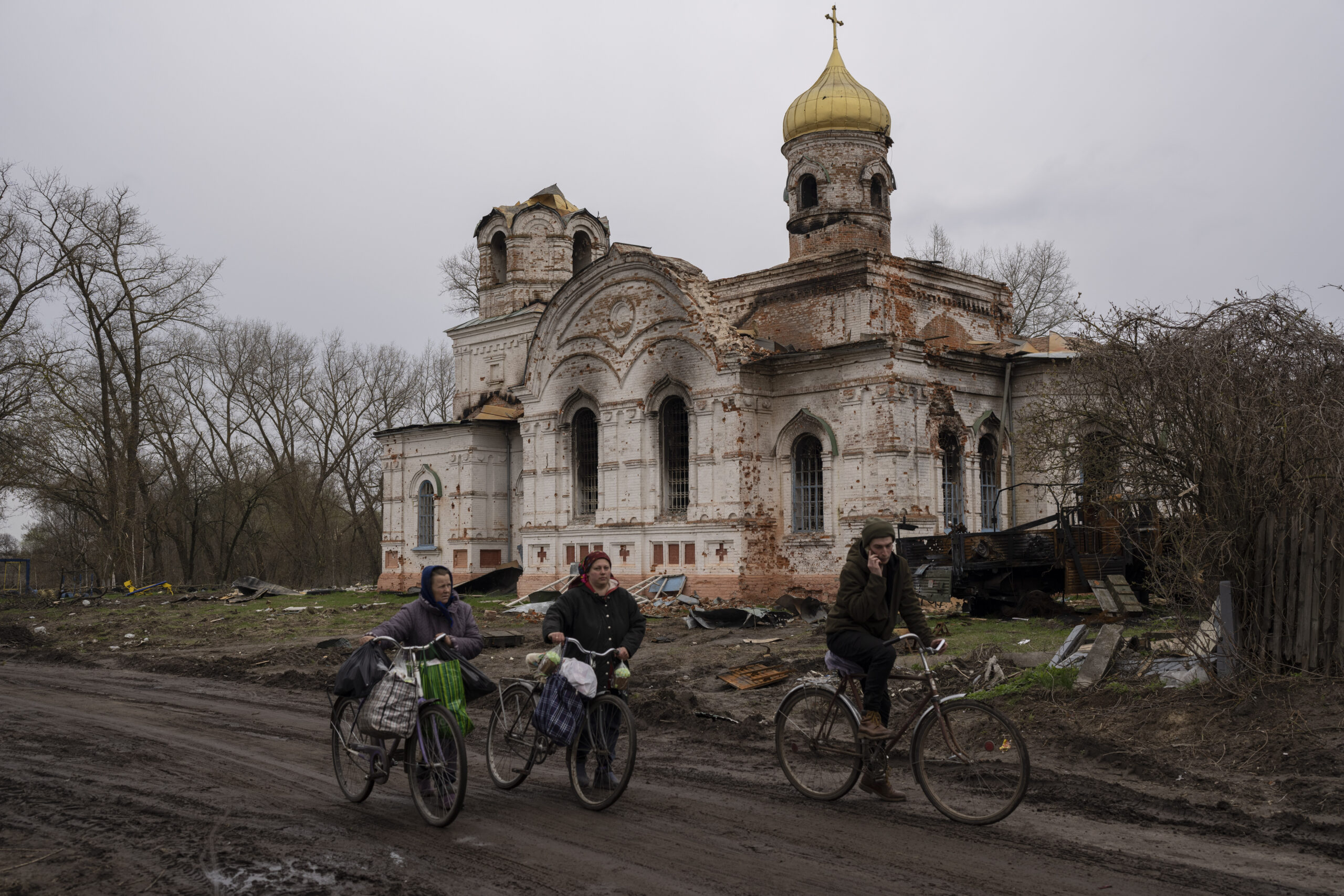 Residents walk with their bicycles in front of a damaged church in Lukashivka, northern Ukraine, Friday, April 22, 2022. A single metal cross remains atop the Orthodox church of shattered brick and blackened stone. Residents say Russian soldiers used the house of worship for storing ammunition, and Ukrainian forces shelled the building to make the Russians leave. (AP Photo/Petros Giannakouris)

In Western society, environmental activism is often framed as a progressive rather than conservative ideal — is there a deeper way of framing what is at stake beyond this polarization?

Yes, I think so. At the end of the day, caring for God’s planet, caring for our home is a value that we all should have whether we are progressive or conservative. That was part of the reason I wrote and published Eco Bible. The environmental movement began 50 years ago. For the past 50 years, most mainstream religious groups and clergy have not gotten onboard the ecological bandwagon — partly because they see it as a progressive or tree-hugger cause.

Some of my values you might describe as conservative and some of them you might describe as progressive. The environmental movement is not going to succeed to convince conservatives to be progressives. But what I think faith-based ecological activists (could do), is try to speak with conservative people about how caring for God’s creation is a religious value. It’s not a “left wing” thing, it’s something that is part of our religions and that God wants of us. And to properly be a religious person in this moment of history requires that we live a more ecological lifestyle.

In early March, your organization, the Interfaith Center for Sustainable Development, partnered with the Elijah Interfaith Institute to deliver a letter signed by over 150 religious leaders worldwide to the Russian Orthodox Church in Jerusalem, calling for peace. What’s the importance of an interfaith response to both the environmental crisis and the current war?

We need to come together. First of all, when I say strength in numbers, it means that the messaging is stronger when we’re together. The more that religious leaders publicly speak about this issue, along with scientists who have been speaking about this now for decades, the more I think it will be convincing.

You know if the Dalai Lama, Ecumenical Patriarch (Bartholomew), Pope Francis and Rabbi (Jonathan) Sacks, of blessed memory, came together (to discuss the climate crisis), there’s a certain seriousness with which you can take the issue. These are “conservative” religious people who, from a spiritual place, are able to understand that something is off here. And the melting of the ice caps and the record fires and droughts and flooding — these are all signals that earth is messaging to us that we need to change. Religious leaders are in agreement about that. That’s the whole idea of bringing them together.

And then similarly with the war in Ukraine, if 150 religious leaders say to Patriarch Kirill, “We’re calling on you to seek peace,” theoretically he should listen. You know, that’s the idea. They are supposed to be his peers.