(RNS) — More than 50 years after the movement began in Manhattan’s Tompkins Square Park, ISKCON is having a new moment in New York City. A religion once known for its popularity among white hippies, the International Society for Krishna Consciousness, or Hare Krishna, has found both popularity and legitimacy among an ever growing Hindu diaspora.

Last week, ISKCON NYC celebrated the festival of Janmashtami, the holiday marking the birth of Krishna, the namesake “Godhead” of the Hare Krishna movement. Hundreds of devotees gathered at the Brooklyn Hare Krishna center, a location complete with a gift shop and full-service vegetarian continental kitchen, to chant Krishna’s name and offer flowers and music in veneration of the Vishnu incarnate and his wife, Radha.

“There is a great joy that is experienced after such meditations that is incomparable to anything else we’ve experienced,” said senior devotee Rohini Ramnarayan. “Each year we look forward to celebrating the advent of our Lord and best friend.”

Also in attendance at the celebration were a few New York lawmakers and representatives, including Dilip Chauhan, the deputy commissioner of the Mayor’s Office of International Affairs, who came bearing a special proclamation from Mayor Eric Adams — a framed statement that Aug. 19, 2022, would be declared as “ISKCON Day.”

“I want to commend the great work ISKCON has done,” said Chauhan, noting the Hare Krishna Food for Life, the largest vegetarian food distribution program in the world. “They have done the job for the community.” The International Society of Krishna Consciousness was conceived in 1966 by A.C. Bhaktivedanta Swami Prabhupada, who is said to have started the movement by chanting under a tree in the park until curious New Yorkers joined him. Prabhupada had an evangelistic zeal and worked to spread his teachings throughout the West, first by translating Vedic wisdom texts to English, then by packaging the belief system as one that spiritual seekers worldwide could easily understand.

“There was a kind of magnetism that drew young people to him,” said Graham Schweig, a scholar of Vaishnavism and professor at Christopher Newport University in Virginia. “The seed was planted in New York, and it exploded all over the world.”

The movement caught on within 1970s counterculture largely due to its most recognizable spiritual practice — vigorous and transcendent singing and dancing to the repeated prayers, or Mahamantra, of “Hare Rama” and “Hare Krishna” — and drew the likes of Beatles lead guitarist George Harrison. ISKCON followers became a familiar, if still peculiar, sight at airports and in subway tunnels. Characterized by their long crimson robes, forehead markings and shaved heads, devotees shared music and copies of the Bhagavad Gita with passersby, as well as requests for donations.

ISKCON has historic roots in Hinduism but simultaneously maintains a unique identity under Gaudiya Vaishnavism, a monotheistic tradition within Vedic or Hindu culture. Many ISKCON members elect to separate themselves from Hindus altogether, calling themselves only servants of God, a belief they say transcends any sectarian identity. After devotees faced pushback and were criticized as a “new cult,” Prabhupada emphasized ISKCON’s ties to the third largest faith tradition in the world, in hopes of being considered an authentic practice.

Today, the movement has over 1 million followers and more than 800 centers across the world. A majority of ISKCON’s membership now comes from Indian Hindus, and India has the largest demographic of ISKCON devotees and temples. And it has become a significant feature in the Indian American experience. 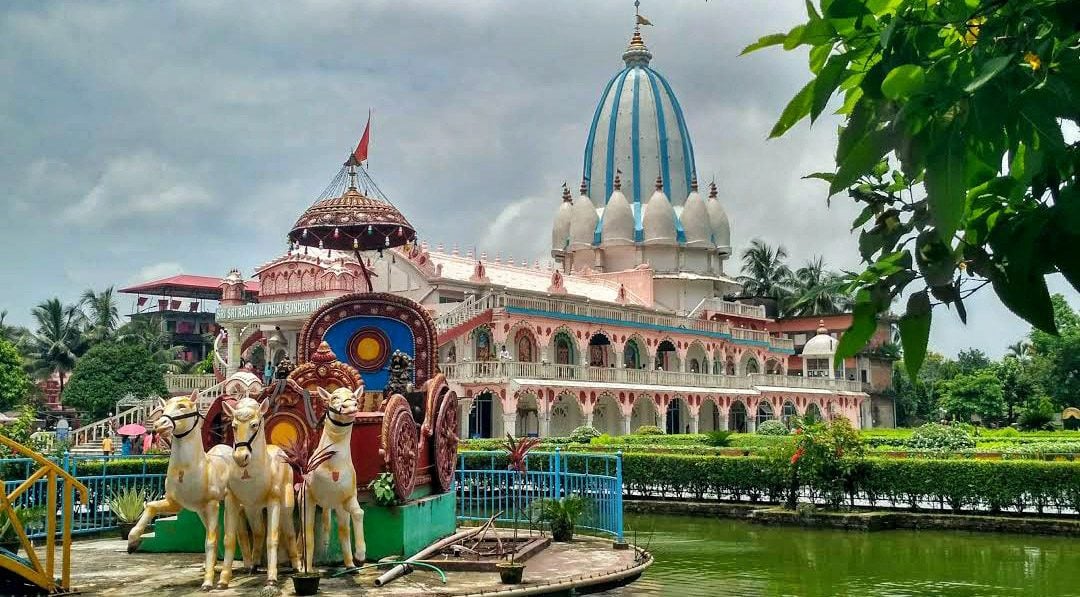 As Schweig describes, Indian immigrants to the United States started to embrace the “non-watered down” devotion that Hare Krishnas had to their spiritual practices in the ’80s and encouraged others from the Hindu diaspora to fund and practice at ISKCON temples. They saw the movement as a way to preserve the Hindu cultural ties they feared were fraying in their children’s generations.

“They noticed a kind of intensity and focus that wasn’t present in other Hindu temples,” said Schweig.

State Assemblywoman Jenifer Rajkumar, the first Hindu elected to a New York state office, attended the Janmashtami celebration in Brooklyn, where she described her efforts to make Diwali a recognized holiday and declare October Hindu Heritage Month to a cheering crowd.

“We are gaining representation, and the sky’s the limit for our community,” said Rajkumar. “The time has come for us to spread our Dharmic light across the state and across the country.” 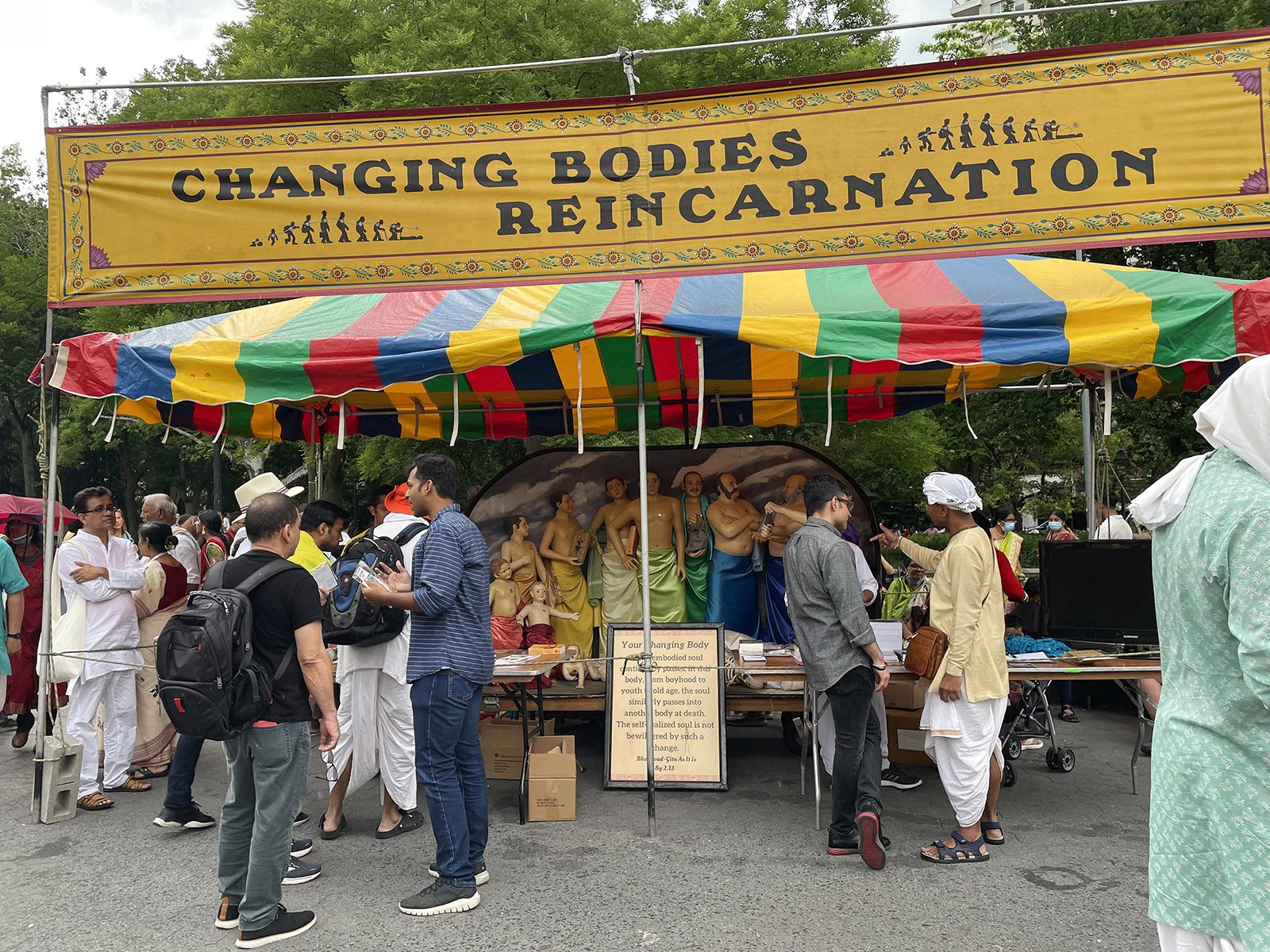 People surround a booth about reincarnation during the Hare Krishna Festival at Washington Square Park on June 11, 2022, in Manhattan, New York. RNS photo by Richa Karmarkar

As marked by the mayor’s proclamation, the ISKCON community in New York City is large and growing. In July, the group took over Washington Square Park for the Hare Krishna Festival, where hundreds of New Yorkers came to receive free food, gift bags and information about ISKCON’s founder and core beliefs.

As more Americans turn away from religiosity and toward spirituality and service, some see echoes of the Vietnam era’s disillusionment with American institutions and predict a resurgence of the religion. In Schweig’s view, this resurgence will take several generations to come to fruition and will remain centered in large metropolitan, free-thinking cities like New York and Los Angeles.

For devotees, the time is now to embrace the ancient wisdom Prabhupada brought to the West.

“As the age of Kali Yuga (the current phase of strife in the Vedas) progresses, people are looking for solutions to the problems of life,” said Bakula Devi Dasi, a direct disciple of Prabhupada himself. “More and more people are turning to spiritual life for solutions because material life is not providing the inner satisfaction that they are looking for.” 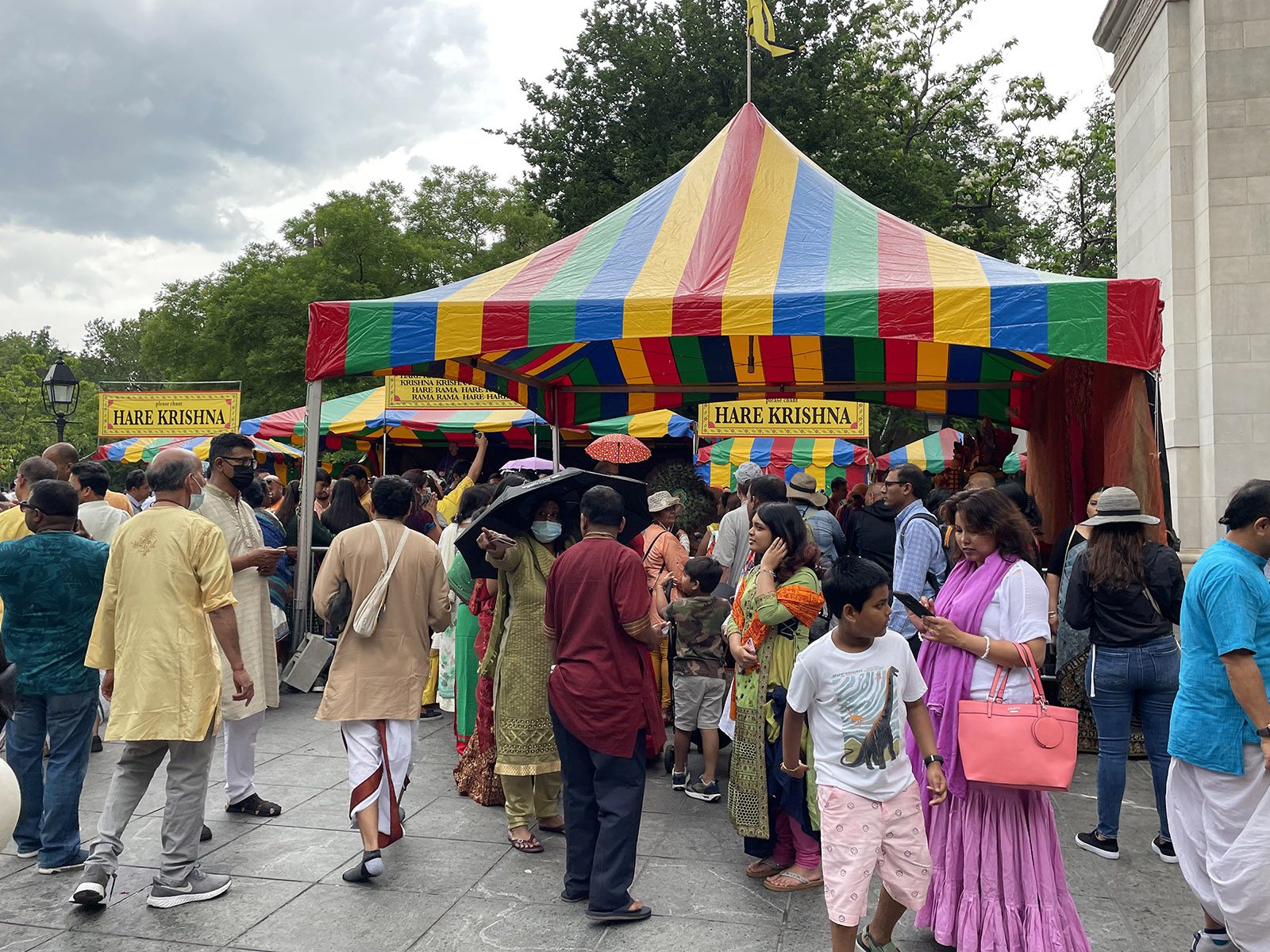 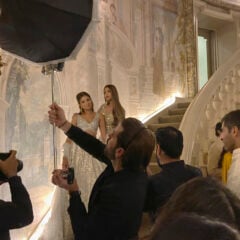 Religion Hub
Hindus denounce violence amid attacks in Bangladesh
Follow us on Facebook!
Submit your photos to RNS