(RNS) — When Pope Francis announced last May he had selected Bishop Robert W. McElroy of San Diego to be the United States’ newest cardinal, the wave of surprise that rippled among U.S. Catholics had less to do with McElroy, who is well-regarded by many, than what his elevation said about his peers: The cardinal’s red hat traditionally goes to prominent archbishops in certain major cities.

California has two such men — Salvatore Cordileone, archbishop of San Francisco, and José Gomez, the archbishop of Los Angeles who is president of the U.S. Conference of Catholic Bishops. Francis’ decision to pass them over looked like a snub aimed at freezing out two conservative churchmen at odds with the pope on matters such as dispensing the Eucharist to politicians who back abortion rights.

But if you ask McElroy, his elevation to cardinal in Rome on Saturday (Aug. 27) is a pastoral decision that will come at least in part as recognition of his approach to ministry, which hews closely to Francis’ own.

“The pope is calling us to look on his pastoral theology in a new way,” the cardinal-to-be told Religion News Service this week, speaking from Rome.

McElroy, 68, originally from San Francisco, explained the concept of pastoral theology is “underdeveloped” but hinges on the application of Catholic beliefs “in the life of people.”

“We have tried to bring those major themes in the application of pastoral theology and Catholic social teaching as it has been evolving and penetrating — particularly in the areas of care for the environment, the poor, race and immigration, which is so crucial to our own society in San Diego,” he said.

What it doesn’t mean is focusing disproportionately on condemning abortion and same-sex marriage, as bishops have elsewhere.

In elevating McElroy, the pontiff is also lifting up an archdiocese that is more than 60% Hispanic, signaling an interest in a changing U.S. church.

But observers say it’s impossible to ignore McElroy’s criticism of political and theological conservatives in ways that echo Francis’ comments — and imply that the pastoral is political.

“Francis feels like he wants somebody who’s more pastoral,” Anthea Butler, chair of the department of religious studies at the University of Pennsylvania, said. She added McElroy’s elevation suggests Francis is at least “displeased” with the bishop’s conservative neighbors.

“Gomez has not been pastoral. Cordileone is not pastoral,” she said.

In 2015, McElroy expressed frustration with the USCCB’s statement on political responsibility, lamenting that abortion and euthanasia consistently take precedence over concerns such as poverty and climate change. McElroy charged that the document was out of step with Francis’ declaration two years prior that the church had grown overly “obsessed” with abortion, same-sex marriage and contraception.

Two years later, in a firebrand speech to the World Meeting of Popular Movements, McElroy challenged newly elected President Donald Trump, railing against “alternative facts” and encouraging those present to “disrupt” Trump’s environmental and other policies.

In 2018, McElroy spoke out in defense of Aaron Bianco, a gay Catholic and a professor in the department of theology and religious studies at the University of San Diego. While working as a pastoral associate at St. John the Evangelist Catholic Church in San Diego, Bianco had established a ministry for LGBTQ members, but harassment from far-right Catholic groups about his sexuality had forced him to resign.

Asked about Bianco’s resignation, McElroy told reporters there was “nothing Christian or Catholic about the hateful and vile people whose persecution of Aaron Bianco drove him from his ministry.”

Bianco, who met the pope this summer at the Vatican, called McElroy’s appointment to the College of Cardinals “a huge step forward for inclusivity.” 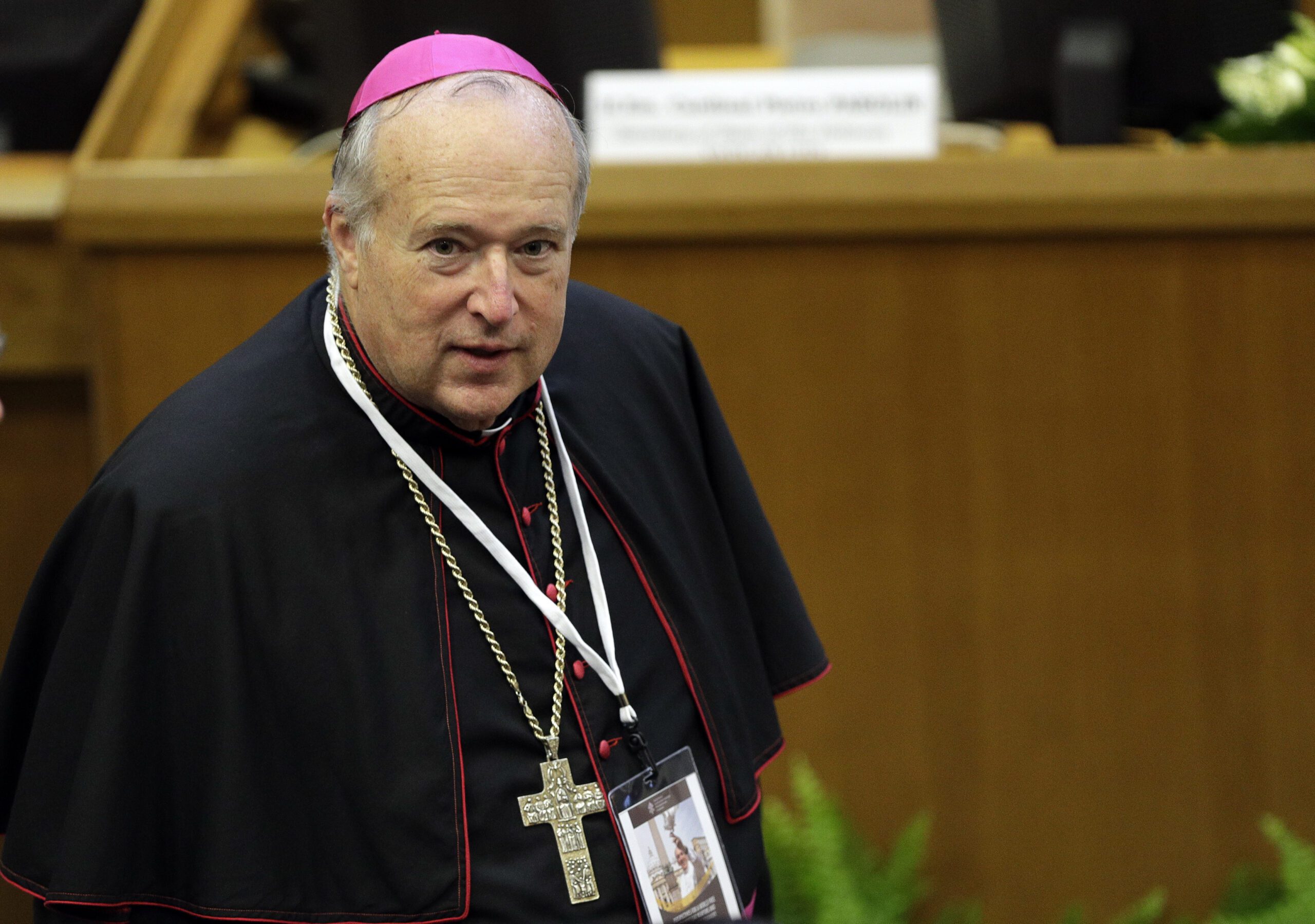 FILE – Robert W. McElroy, bishop of the diocese of San Diego, arrives to attend a conference on nuclear disarmament, at the Vatican, Friday, Nov. 10, 2017. When San Diego Bishop McElroy receives his prestigious red hat at the Vatican on Saturday, he will bring to the College of Cardinals a fervent loyalty to Pope Francis that has often put him at odds with the conservative majority in the U.S. Conference of Catholic Bishops. (AP Photo/Andrew Medichini, File)

Like Francis, McElroy emphasizes that a shift in priorities doesn’t change church teaching. McElroy told RNS that the Supreme Court’s decision to overturn Roe v. Wade will challenge bishops to advocate for legislation limiting abortion in dozens of states and speak out against measures such as an upcoming referendum in California to codify the right to an abortion.

McElroy said the question is always how many resources to dedicate to the causes that have dominated the U.S. bishops’ agenda in recent years. “Treating abortion as preeminent,” he said, “automatically relativizes, in a very profound way, all other issues. It destroys that notion of a continuum, a common fabric, a common, seamless garment of Catholic social teaching.”

McElroy, who studied history at Harvard University before getting his Ph.D. in political science from Stanford University, voiced frustration with how partisanship has “invaded the life of the church” with a “very corrosive influence.” As cardinal, he said, he plans to pursue a more global perspective. (His doctoral dissertation was on morality and American foreign policy.)

But Francis no doubt sees McElroy as valuable for his connection with the people in his own back yard. McElroy’s San Diego diocese lies, metaphorically and literally, between two crucial Catholic populations: Hispanic Americans and those living on the other side of the U.S.-Mexico border. The San Ysidro Port of Entry, on the city’s south end, is one of the largest and busiest land crossings on the planet.

“I know (McElroy) personally, and I am sure that many Mexican Catholic immigrants from San Diego and Imperial counties will feel represented by him in the College of Cardinals,” said Carlos González Gutiérrez, the consul general of Mexico in San Diego.

Butler agreed that the Vatican chose McElroy for his location as much as his politics. “If you’re going to pick somebody from North America, pick somebody who knows the crossroads,” she said.

For the Rev. Bernardo Lara, a parish priest ordained by McElroy who serves one of three churches in the city of Brawley in Imperial Valley, McElroy’s designation as cardinal “is a historic event of great magnitude.”

“The priests who live and grew up in this region would have never imagined that one day a cardinal would be appointed to this area,” said Lara, who was raised in the San Diego-Tijuana border.

Lara said that many Latinos in the region have for years felt more familiar with the Diocese of Mexicali south of the border in Baja California “than with their own in San Diego.”

But that’s changing, he said. “Little by little, people have been feeling part of the same diocese,” Lara said, crediting McElroy and his auxiliary bishops with being visible to the local population.

“Now the appointment as cardinal is the icing on the top of the cake,” he said.

McElroy makes sure his priests are part of the community, too. Juliet Mousseau, vice president for academic affairs at the Franciscan School of Theology, points to McElroy’s decision to educate his seminarians at the University of San Diego’s Franciscan School of Theology, rather than send them out of state or to Rome. At the school, lay people and priests learn side by side. Seminarians are in classes with other women and men “who are committed to the church.”

“All of his priests now will be learning … within the context of the San Diego diocese. I find that to be also emblematic of his closeness to the people,” she said.

Which leads McElroy back to talking about pastoral theology. Expanding on his reasoning, he cited Francis once again, this time appealing to the pontiff’s description of the Catholic Church as a “field hospital.”

“Everyone needs healing, and everyone needs to be healers,” McElroy said. “The church’s primary role is to help heal us all in the grace of God.”