HELENA, Mont. (AP) — The Jewish community in Montana’s state capital has reached its goal of buying a synagogue built in Helena 130 years ago to use as a community and cultural center for Jews in the state, the Montana Jewish Project announced Thursday.

The nonprofit group closed the deal with the Roman Catholic Diocese of Helena, said Rebecca Stanfel, president of the Montana Jewish Project’s board. The price was not disclosed.

“Helena was one of only four state capitals in the nation without a synagogue or Jewish Center,” Julie Bir, another board member, said in a statement. “We’ve just changed that. We’re also excited for Helena’s Jewish community to have a permanent place to meet for religious observance, cultural events and community-growing.”

Stanfel said they the group does not plan to hire a rabbi and build a congregation in Helena, but will hold holiday celebrations and other events at the historic Temple Emanu-El, which was completed in 1891. The project has brought in international Jewish musicians, events based on countering antisemitism and hate and offered Jewish baking classes, Stanfel said.

The synagogue has had several owners. When the Jewish congregation in Helena became so small it could no longer maintain the synagogue in 1935, they sold it to the state for $1 with the request that it be used for a “good and social purpose.”

The state used it to house its social welfare offices.

The Roman Catholic Diocese of Helena in 1981 purchased the building for use as office space. Over the past year, diocese administrative operations were consolidated in a new office building.

The Montana Jewish Project, founded in March 2021, had hoped to raise enough money to buy the former synagogue and other nearby buildings, but had to re-negotiate the purchase to include just the synagogue building, Stanfel said.

“It’s been my pleasure to work with the Montana Jewish Project through this process,” Bishop Austin Vetter, who leads the Diocese of Helena, said in a statement. “It’s vital for all of us that people of faith focus on the good that we can do together instead of our differences.”

“We are so grateful for Bishop Austin Vetter for his enthusiasm and support. He worked with us for many months, and extended closing deadlines twice,” Stanfel said.

The Montana Jewish Project plans a re-dedication at the synagogue this fall, Stanfel said. 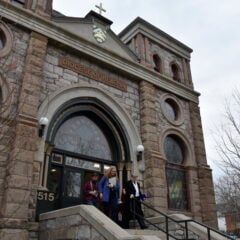 Religion Hub
Helena synagogue building set to return to Jewish community
Follow us on Facebook!
Submit your photos to RNS