VATICAN CITY (RNS) — The seven women stood outside the gates of the Vatican dressed in cardinal red, each carrying a scarlet parasol emblazoned with a phrase of female empowerment. “Ordain Women.” “Reform Means Women.” “It’s Reigning Men.” They were there to greet the 197 cardinals arriving Monday morning (Aug. 29) for a highly anticipated discussion with the pope — and to protest the absence of women in the meeting.

As the men in red filed past, the women in red handed them pamphlets and urged them “to remember your sisters who remain outside.”

About 15 minutes later, the delegation of seven women from Women’s Ordination Worldwide were approached by the police and later taken to a nearby police station where they were held for three hours.

“It shows how dangerous women can be considered outside the Vatican,” Kate McElwee, one of the women arrested and the director of Women’s Ordination Conference, told Religion News Service over the phone on Tuesday.

The cardinals were gathering to participate in a consistory, a closed-door meeting convened by Pope Francis to discuss changes he made in March to his apostolic constitution “Preadicate Evangelium” (Preach the Gospel), that among other things allows laypeople, including women, to occupy Vatican leadership roles traditionally reserved for clergy.

Pope Francis has stated that female ordination is “off the table,” but he created two commissions to study the possibility of opening the diaconate to women, which would allow them to preside over some services but not to administer Mass or perform sacraments. The reports from the commissions have not been published.

Francis has pushed for greater female participation in the church by appointing women to a number of influential Vatican leadership roles, including the first female undersecretary of the Vatican department overseeing the summit of bishops.

When journalists began interviewing the group and taking photos of the cardinals with the open parasols visible behind them, a police car flashed its lights at the women, said Miriam Duignan, a spokesperson for the Wijngaards Institute for Catholic Research and Women’s Ordination Worldwide. 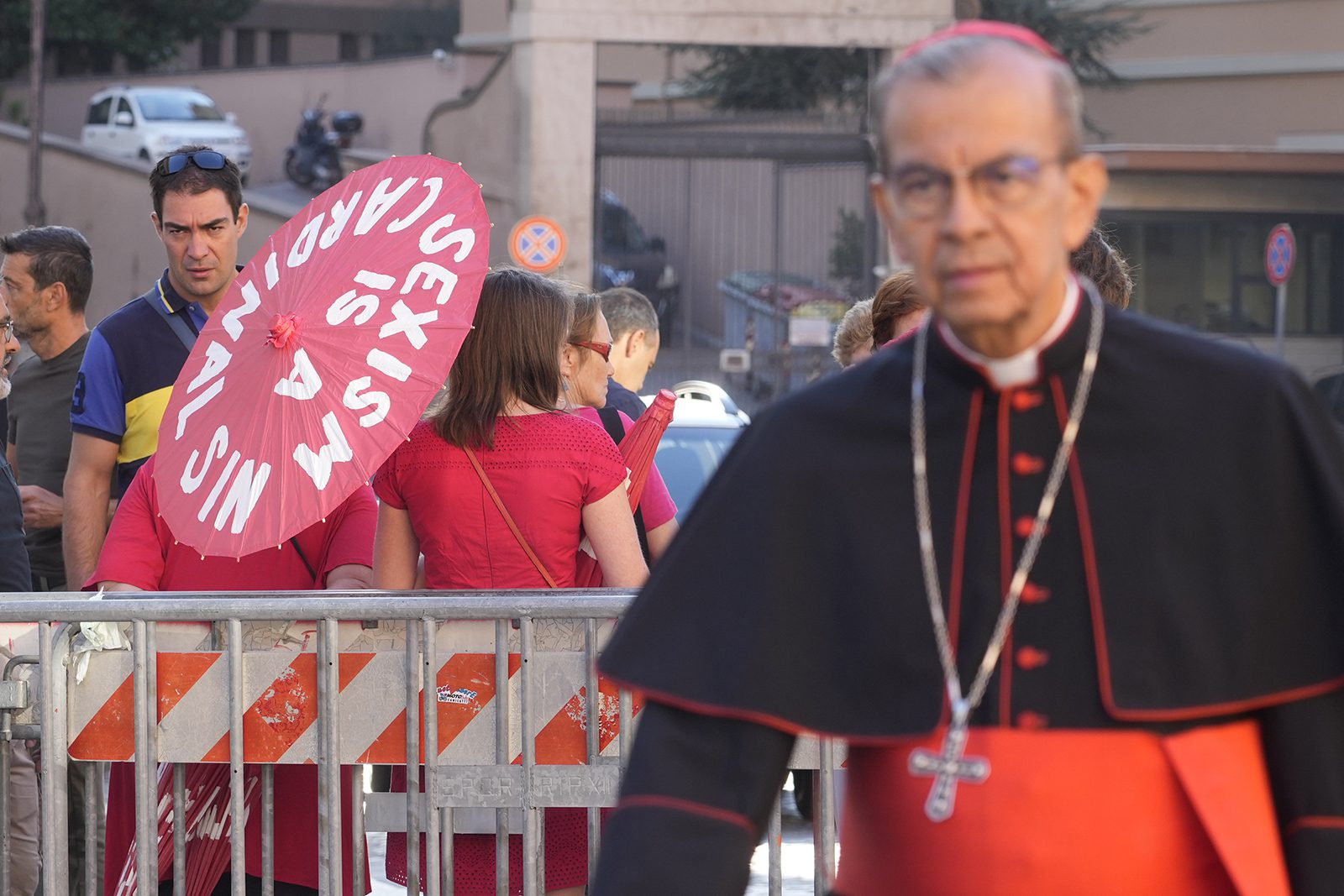 Duignan, who was carrying a parasol reading “Sexism is a Cardinal Sin,” said she was asked to leave as she was being interviewed. The police officers began moving the seven women toward St. Peter’s colonnade and placed a barricade around them using wooden panels.

The Italian police did not respond to request for comment in time for publication.

The women were kept there for one hour, Duignan said, where they were clearly visible by the cardinals entering the Vatican. “You can’t ignore seven women dressed in red, penned in and surrounded by 20 police officers,” she told RNS over the phone on Tuesday. One cardinal walked up and acknowledged what was happening but did not say anything to the police, she said, adding that the others simply walked by.

McElwee said she knew being arrested was a possibility — the women have had their brushes with Italian police officers before — and even though she felt “shaken by the experience,” she hopes “it will rally more people to our cause because it shows that even just seven women can have a huge impact on the conversation.”

According to Duignan, police said the women needed to get a permit next time. But she said they have tried that before, and the times they weren’t denied permits outright, they were forced to protest far from the Vatican where they went unheard and unseen.

The women were released pending charges just as the cardinals, having finished their morning discussions, made their way toward lunch.

“It’s 197 men talking about the future of the church, never mentioning women, and then seven women — completely harmless, carrying delicate little paper parasols — are so threatening to them that they had to wrongfully imprison us, humiliate us and try to intimidate us to never do it again,” Duignan said.

“The reality is that we are a threat to the status quo,” McElwee said.