(RNS) — After a sometimes tense week that included passionate exchanges, the 11th assembly of the World Council of Churches approved a statement on Thursday (Sept. 8) regarding Russia’s invasion of Ukraine that denounces the war but does not single out the leader of the Russian Orthodox Church, Patriarch Kirill, who has been widely criticized for supporting the invasion.

The statement condemned “this illegal and unjustifiable war,” and specifically rejected “any misuse of religious language and authority to justify armed aggression and hatred,” while calling on all parties to refrain from military action around the Zaporizhzhia nuclear power plant.

But the document produced by the assembly, meeting in Karlsruhe, Germany, is unlikely to satisfy critics who in recent months have called for the group’s leadership to strip the Russian church of its membership in the ecumenical body.

Moscow’s patriarch has already been sanctioned by the United Kingdom because of his rhetoric. The European Union also discussed similar sanctions, but they were reportedly abandoned after Viktor Orbán, the prime minister of Hungary and an ally of Russian President Vladimir Putin, intervened.

Kirill has spent years outlining what is widely seen as the spiritual foundation for the invasion, inserting a religious justification for reclaiming Russia’s sphere of influence in Ukraine and elsewhere with references to “Holy Rus” or “Russian world.” Earlier this year, hundreds of Orthodox theologians and scholars declared the concept a heresy.

“The WCC is a free space for dialogue, and we come together not because we agree with one another but because we disagree,” said Sauca, saying the proposal to expel the Russians was unanimously defeated.

Sauca said he and others had visited Ukraine this year and that observer representatives of Ukraine would be present for the assembly. But in the days that followed, any hope of brokering formal dialogue between the Ukrainians and ROC members during the proceedings appeared to dissipate.

German President Frank-Walter Steinmeier addressed the assembly Aug. 31, singling out the Russians in his remarks. He noted that while a number of Russian Orthodox priests have spoken out against the war and faced legal action for it, church leaders have actively supported the Russian government’s military actions.

“The heads of the Russian Orthodox Church are currently leading their members and their entire church down a dangerous and indeed blasphemous path that goes against all that they believe,” said Steinmeier. 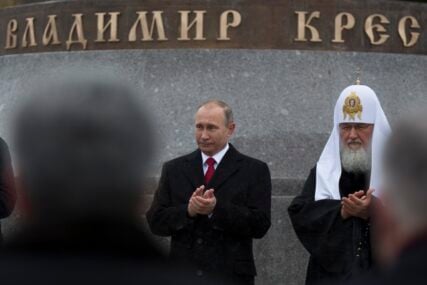 FILE – Russian President Vladimir Putin, center, and Russian Orthodox Patriarch Kirill applaud during the unveiling ceremony of a monument to Vladimir the Great on the National Unity Day outside the Kremlin in Moscow, Russia, Friday, Nov. 4, 2016. President Vladimir Putin has led ceremonies launching a large statue outside the Kremlin to a 10th-century prince of Kiev who is credited with making Orthodox Christianity the official faith of Russia, Ukraine and Belarus. (AP Photo/Alexander Zemlianichenko)

“We have to speak out, also here in this room, in this assembly, against this propaganda targeting the freedom and rights of the citizens of another country, this nationalism, which arbitrarily claims that a dictatorship’s imperial dreams of hegemony are God’s will,” the president said.

Acknowledging Russian Orthodox delegates in the room, Steinmeier asked that other assembly attendees “not to spare them the truth about this brutal war and the criticism of the role of their church leaders.”

In his own address on Sept. 2, Archbishop Yevstratiy of Chernihiv and Nizhyn of the independent Orthodox Church of Ukraine accused Russian soldiers of atrocities. Two weeks into the war, he said, troops opened fire on unarmed civilians manning a checkpoint just outside of the village of Yasnohorodka, killing a local parish priest who had raised his cross as he tried to protect civilians.

“Today, Ukrainians are the ones attacked by robbers,” Yevstratiy said in his condemnation, invoking the biblical parable of the Good Samaritan. “Do not pass by our suffering and our pain, as the priest and the Levite of the parable!”

Yevstratiy thanked WCC members for speaking out against Kirill’s support for the war and recommended that the Ukrainian Orthodox Church, which declared itself independent of Moscow in 2018, be granted full WCC membership.

Tensions flared again days later when the proposed statement on the invasion of Ukraine was introduced to the assembly. Roman Sigov, who identified himself as part of the Ukrainian Orthodox Church observer delegation, stepped to the microphone, urging WCC leaders to respond to his group’s submitted comments. (Leaders ultimately accommodated only two minor wording changes in the final document.)

“I cannot express how much it hurts to hear a statement which treats the victim and the aggressor in the same way,” Sigov said. He also accused Russian prelates present of supporting the war and, in one case, sharing videos on social media mocking Ukrainian prisoners.

“Let us hear the voice of Ukrainians when talking about the war in Ukraine,” he said, noting that independent Ukrainian churchmen, unlike Russian Orthodox leaders, lacked official representation at the assembly. The Russian Orthodox were also critical of the statement. One Russian delegate, Archimandrite Philaret Bulekov, dismissed it as part of an “information war” and derisively likened it to anti-war statements from McDonald’s and Starbucks, saying it would occupy “the same level of importance.”

He called the German president’s speech “pathetic” and alleged that Steinmeier bore “personal responsibility” for the Ukraine invasion.

After Bulekov finished, a youth observer representing the Orthodox Church of Ukraine, Oleksandra Kovalenko, called on members of the Russian delegation to raise their blue voting cards if they opposed the Russian invasion of Ukraine. According to one attendee, no blue cards were raised.

“It is very sad that you compared the blood of Ukrainian people to Starbucks and McDonald’s,” said Kovalenko to applause from many in the chamber.

Pressed by journalists at a closing press conference, members of the WCC central committee acknowledged Ukrainian and Russian Orthodox delegations did not formally meet during the assembly. Metropolitan Nifon of Târgoviște, a Romanian Orthodox priest who is vice moderator of the WCC committee, said members of the two sides may have talked informally and “exchanged some views.” Formal dialogue, he said, remains a goal.

“For people to come to the table, it takes a lot of footwork in the background,” said Agnes Abuom, moderator of the WCC Central Committee representing the Anglican Church of Kenya. “That needs to continue to happen in order that there will be trust, the willingness to come to the table and dialogue.”

Mary Ann Swenson, a United Methodist Bishop from the U.S. and a vice moderator of the central committee, expressed hope for such talks. “We really did do some breaking down of walls in a lot of ways,” she said.

As important at this stage, she said, was making sure others heard the stories of those ravaged by the ongoing war. “I would also say that a significant thing was that other people in all of the other parts of the world got a deeper and better understanding of what people are really living with in that region, to hear some of the struggles from all of the people in that region. That will make a difference in the future.” 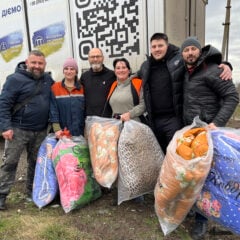 News
Faith leaders call for Putin to extend Christmas truce into a permanent cease-fire
Follow us on Facebook!
Submit your photos to RNS