WASHINGTON (RNS) — Second gentleman Douglas Emhoff met with representatives from the National Council of Jewish Women at the White House on Monday (Sept. 12) to discuss abortion rights, with activists saying he agreed the topic is a matter of religious freedom for many American Jews.

Sheila Katz, head of the NCJW, called the roughly hourlong meeting she and members of her group convened with Emhoff “wonderfully inspiring.” She said the discussion focused primarily on various state-level battles over abortion access in the wake of the U.S. Supreme Court decision overturning Roe v. Wade earlier this year, ending decades of nationwide legalized abortion.

“One of the more meaningful things he talked about was what it’s like for him to be very vocal as a man on this issue,” Katz said of Emhoff. “He said at one point that men need to ‘Get their heads out of the sand and jump into action.’”

Katz said Emhoff, who is Jewish, also agreed abortion access was “an issue of religious freedom for Jews,” referring to a Jewish understanding of abortion that differs from many conservative Christian approaches to the issue.

“We were really happy to hear him talk about that,” Katz said. “He understands what it means — that in Judaism, abortion is not only permitted, but sometimes required when the life of the pregnant person is at risk.”

Various White House officials, including Vice President Kamala Harris, have met with faith-based abortion rights advocates in the past, but Monday’s meeting represents the highest level of support yet for an argument NCJW and other Jewish groups have drawn attention to for months: State-level abortion restrictions being implemented across the country directly conflict with many Jewish understandings of abortion — including when life begins.

“Abortion access is a Jewish value,” Katz told a crowd of more than 1,000 Jewish demonstrators who protested outside the U.S. Capitol in May.

“This law criminalizes Judaism and a bunch of other religions,” Silver told RNS at the time, noting that DeSantis signed the bill into law during an event hosted by an evangelical church.

Several other Florida clergy from a range of religious traditions filed a similar suit in August, arguing the ban also impugns on their religious freedom. They later filed for a temporary injunction.

And last week, a lawsuit filed in Indiana by the American Civil Liberties Union of Indiana, on behalf of five anonymous residents and the group Hoosier Jews for Choice, argued the state’s forthcoming abortion ban, which goes into effect later this week, violates Jewish teaching about when a fetus becomes a person and the necessity of abortion in certain circumstances.

“Jewish law stresses the necessity of protecting the life and physical and mental health of the mother prior to birth as the fetus is not yet deemed to be a person,” reads the lawsuit.

The NCJW’s meeting with Emhoff coincides with a planned week of activism slated to take place across the country — including in the nation’s capital. Hoping to galvanize what is already overwhelming support for abortion access among U.S. Jews, organizers are planning a demonstration outside the U.S. Capitol on Wednesday that will include speeches from leaders such as Rep. Debbie Wasserman Schultz of Florida and the blowing of shofars, a traditional Jewish instrument used in religious rituals and fashioned from a ram’s horn.

During Emhoff’s meeting with NCJW activists, Katz said, he noted his own rabbi is slated to take part in the demonstration — or what activists are calling a “sho-test.” The delegation also celebrated Emhoff’s status as the first Jewish person to occupy his position and asked for his thoughts in the lead-up to the High Holidays, including Rosh Hashana later this month.

According to Katz, the second gentleman responded by reflecting on the significance of lighting a menorah in the White House and affixing a mezuzah to the doorway of the vice presidential residence.

“I still have not gotten over the fact that we have somebody Jewish, in the White House, in that role,” Katz said. 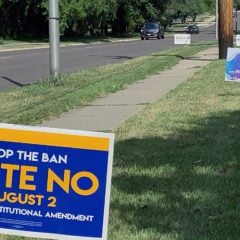