INDIANAPOLIS (AP) — Opponents of Indiana’s abortion ban set to take effect next week filed a lawsuit Thursday arguing it would violate a state religious-freedom law that Republican lawmakers approved in 2015.

The lawsuit filed in Marion County court by the American Civil Liberties Union of Indiana on behalf of five anonymous residents and the group Hoosier Jews for Choice argues that the ban would violate their religious rights on when they believe abortion is acceptable. They are citing a state law that then-Gov. Mike Pence signed over the objections of critics who said it allows discrimination against gay people.

Ken Falk, the ACLU of Indiana’s legal director, said in a statement that the religious-freedom law protects “all Hoosiers, not just those who practice Christianity.”

“The ban on abortion will substantially burden the exercise of religion by many Hoosiers who, under the new law, would be prevented from obtaining abortions, in conflict with their sincere religious beliefs,” Falk said.

Indiana was the first state to enact tighter abortion restrictions after the U.S. Supreme Court eliminated federal protections by overturning Roe v. Wade in June. The ban that is set to take effect Sept. 15 includes exceptions allowing abortions in cases of rape and incest, before 10 weeks post-fertilization; to protect the life and physical health of the mother; and if a fetus is diagnosed with a lethal anomaly. Current Indiana law generally prohibits abortions after the 20th week of pregnancy and tightly restricts it after the 13th week.

The ACLU’s lawsuit contends that the new abortion ban would violate Jewish teaching that “a fetus attains the status of a living person only at birth” and that “Jewish law stresses the necessity of protecting the life and physical and mental health of the mother prior to birth as the fetus is not yet deemed to be a person.” It also cites theological teachings allowing abortion in at least some circumstances by Islamic, Episcopal, Unitarian Universalist and Pagan faiths.

Indiana abortion clinic operators argued in a lawsuit filed last week that the ban would violate the state constitution. No court rulings have been issued in that lawsuit.

Republican state Senate President Pro Tem Rodric Bray and Republican state Attorney General Todd Rokita both issued statements Thursday saying they believe the abortion ban is proper under the state constitution, but they did not address arguments that it violates the religious freedom law.

No faith is monolithic on the abortion issue. Yet many followers of faiths that do not prohibit abortion have lamented that tighter abortion laws could supersede their individual rights and religious beliefs, such as the position of Judaism as outlined in the lawsuit.

A similar lawsuit has been filed in at least one other state. A synagogue argued in June that Florida’s abortion restrictions violates religious freedom rights of Jews. That case is still working its way through the courts.

Daniel Conkle, an Indiana University law professor who testified in support of the state’s religious freedom law during the 2015 legislative debate, said it will be difficult to use that law to argue against the abortion ban. He said the ACLU will have to show that a person “would be relying upon their religious beliefs in a substantial way” in seeking an abortion.

“I don’t think it’s enough simply that their religion does not recognize a prohibition on abortion,” Conkle said. “I think it has to be more in the way of a substantial motivation than that.” 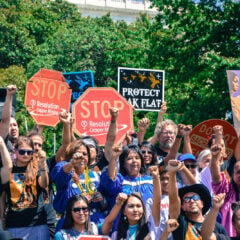 News
Apaches urge rehearing in fight to preserve sacred site in Arizona
Follow us on Facebook!
Submit your photos to RNS