(RNS) — I — an African American, whose family was enslaved in the British slaving colony of Barbados, whose ancestors were indentured and enslaved in the British colonies of Maryland and Virginia and whose nation broke from the tyrannical rule of a kingdom united by brutal military conquest — shed a tear when I heard the news that Queen Elizabeth II was dead.

Why? Stories are powerful. They shape our view of ourselves, of each other, of the world and of God. The tales told by the peoples of Britain and the United Kingdom about themselves — who they are and how they got here — are among the most powerful in the world, even more powerful than the kingdom’s celebrated naval fleet.

Consider: King Arthur’s Camelot, Henry V’s valor, Shakespeare’s Elizabethan flourish, Victoria and Albert’s love match and now “The Crown” and its intimate study of royals struggling to survive the life-controlling weight of monarchy itself. Turned inward, these tales gaze on satin and diamonds, on individual valor and failure, on love won and love lost. They center the victors and sometimes humanize them. All the while, they whitewash or wipe from the record completely the utter brutality of colonization and slavery.

We see jewels scavenged from the lands of the conquered. We do not see the conquered. We see the prizes of war sitting atop the brows of ivory-toned men and women. We do not see the shattered families, the gutted resources, the bloodied brown and Black bodies. We see the pomp and circumstance of ceremonies, not the mayhem of the massacres and concentration camps required to pluck emeralds from the hands of rightful heirs and place them in imperial scepters.

Set in the crowns and scepters that have bejeweled the kingdom, itself united by force, the spoils of war reinforce England’s story. The diamonds in the king’s crown no longer mean carnage. They mean “ordained to rule.” 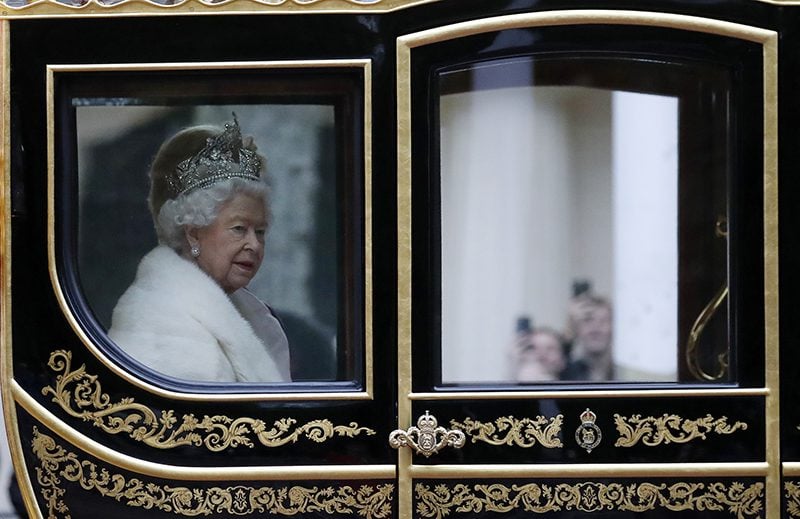 Britain’s Queen Elizabeth II travels in a carriage to Parliament for the official state opening of Parliament in London, Oct. 14, 2019. (AP Photo/Frank Augstein)

This story of election and godlikeness is passed down from generation to generation. Now it will pass from Elizabeth II to Charles III, then to William. And even now, little George’s hands are being prepared to hold and protect it when it comes.

It is the lie of human hierarchy. It is Aristotle’s lie — that the conquered demonstrated they were created to be subjects and the conquerors revealed they were created to rule. It is the lie of Pope Nicholas V, who harked to Aristotle’s hierarchal view of the world when he warped the Bible and declared that only the civilized and Christianized were created to rule. Then he endowed explorers with the power to claim lands and enslave the peoples on behalf of the state. This papal bull, “Romanus Pontifex,” became the legal bedrock upon which all of North America, South America, colonized Africa, Australia, Vietnam, New Zealand, India and the world as we know it were brought under Europe’s feet.

But that is not the way of brown colonized Jesus — the conquered one. That is not the way of the Holy Spirit, whose first act on earth was to break Roman hegemony and loose colonized tongues to speak Indigenous languages and to be understood by all! It is not the way of the church — born in the shadow of colonizing Rome — where each one sold all they had so no one had want or need. It is not the way of Paul’s baptismal liturgy, which smashes human hierarchy with its declaration: “There is no longer Jew nor Greek, slave nor free, male nor female.” And the implication from Genesis 1:26 is that if one is made in the image of God, then one is also created with the divine call and the capacity to steward the world and flourish.

So when the queen died, many Black and brown “subjects” — whose flesh, shattered families and limited flourishing still bear the festering scars of colonization — shed tears, too. They cried tears of rage. Their brown eyes were not dazzled by the reginal story. They were enraged by it. 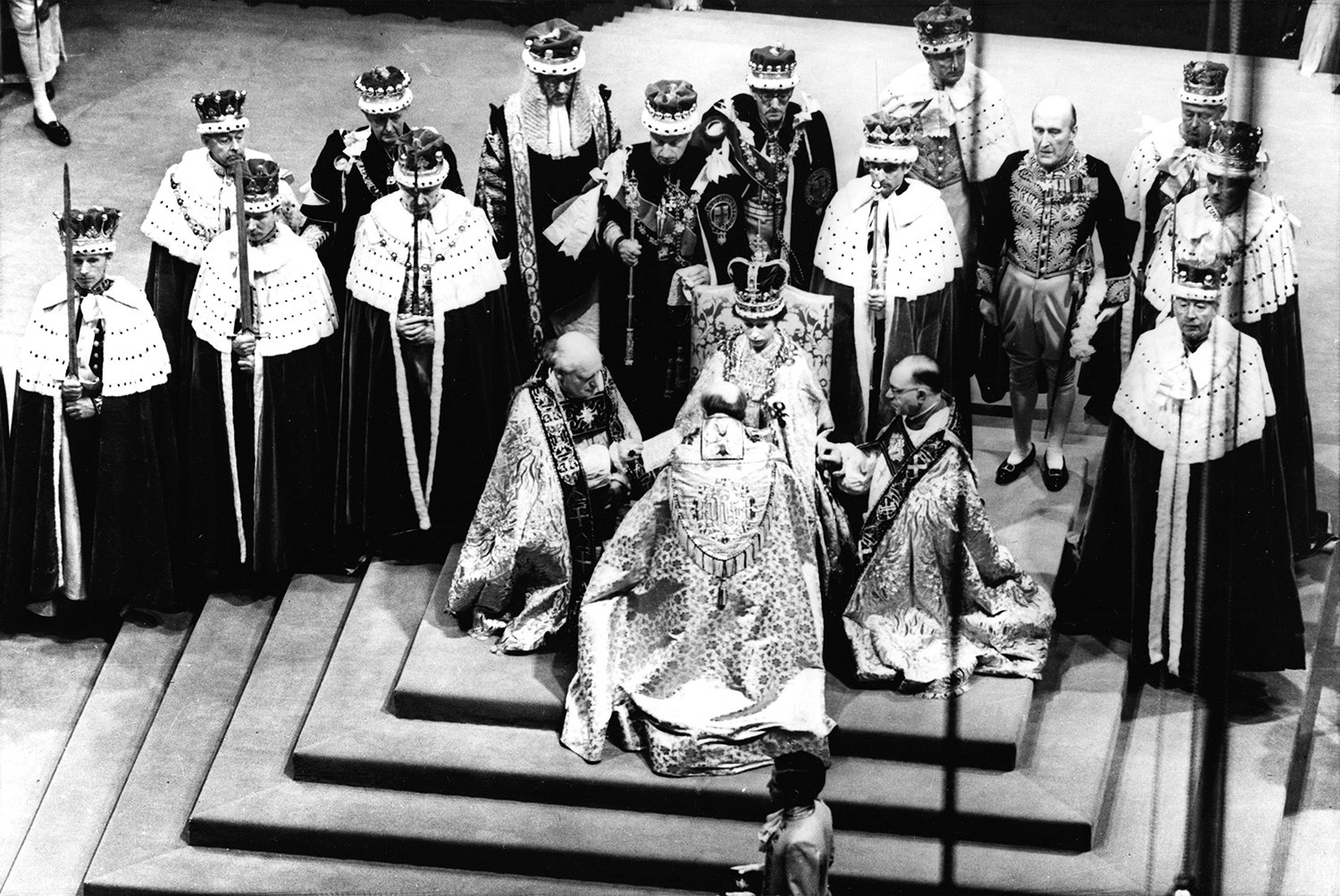 In this June 2, 1953, file photo, Britain’s Queen Elizabeth II, seated on the throne, receives the fealty of the Archbishop of Canterbury, back to camera at center; the Bishop of Durham, left; and the Bishop of Bath and Wells, during her coronation in Westminster Abbey, London. (AP Photo, File)

They were enraged by the fact that months after young Elizabeth lay hold of the scepter in 1952, Mau Mau Kenyans rose up to claim political rights and land reforms. The queen’s government killed approximately 90,000 images of God and rounded up, tortured and shoved approximately 1.5 million others into concentration camps. The queen’s government fell mum, refusing to acknowledge or apologize until a white Harvard grad student uncovered the extent of the atrocity in 2005. The government settled out of court in 2013.

They were enraged that apartheid South Africa was rooted in British colonial hierarchies of human belonging. During Elizabeth’s reign, her government laid legal foundations for the removal of 60,000 images of God from District Six to make the region whites-only.

And they were enraged that on the queen’s watch, the government that rules in her name stole children from Indigenous families in Canada and Australia from her first day on the throne into at least the 1980s.

Of course, Parliament controls the legislative process in a constitutional monarchy, so Elizabeth had no power to make hard changes to U.K. law or policy. But she did have the soft power of the bully pulpit. As head of the Church of England and protector of the U.K. constitution, she had the ability to raise her voice.

The truth is, she was trained to have no opinion. The monarchy’s survival depended on it, she was told. So, the queen closed her eyes, shut her mouth and laid hold of the scepter and the story of divine election, ordination to rule and inherent nobility. She played her part in the pageant. And the monarchy survived, at the expense of the image of God under its feet.

So, what is the hope in this moment of transition? 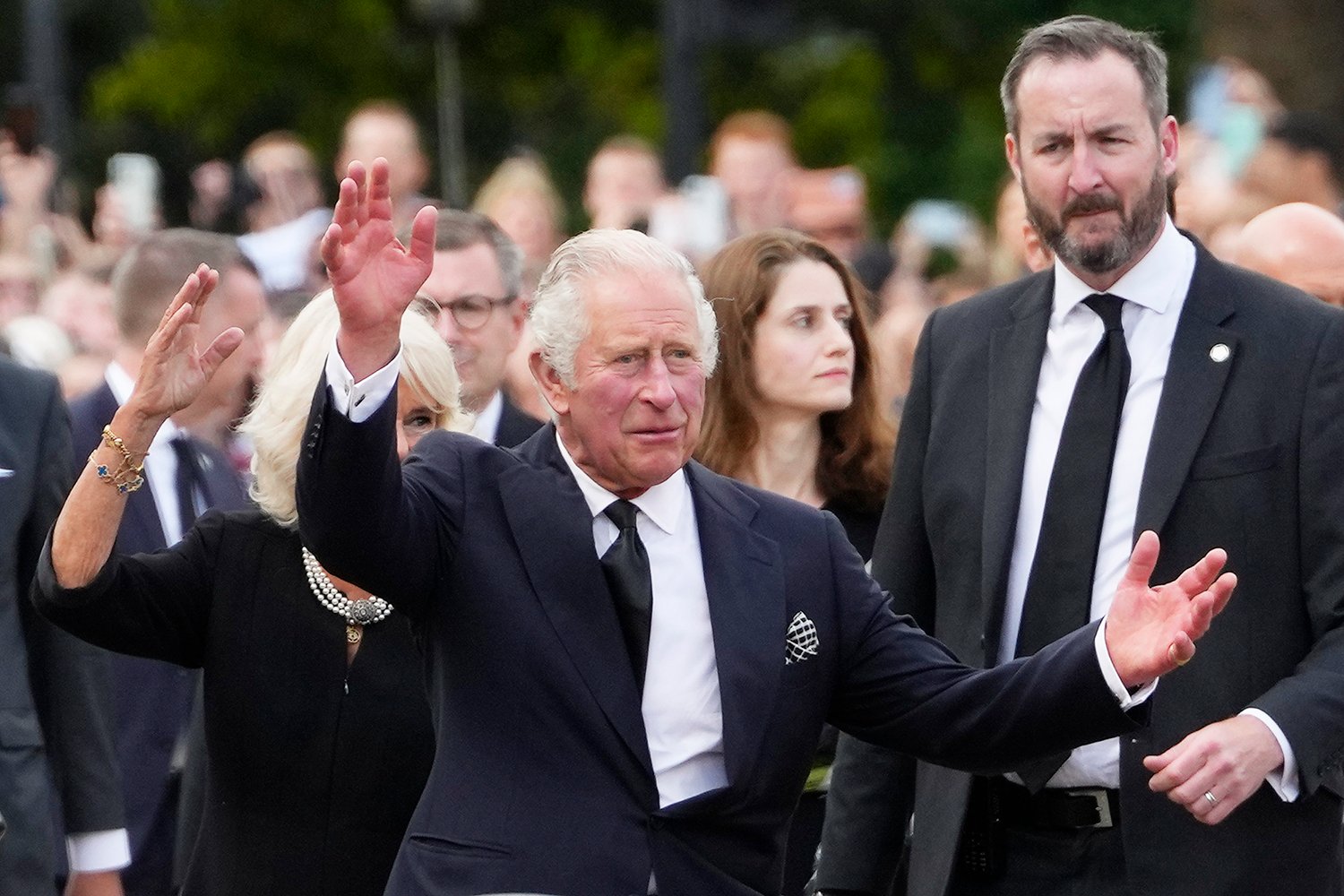 King Charles III and Camilla, the queen consort, wave as they arrive at Buckingham Palace in London, Sept. 9, 2022. Queen Elizabeth II died Sept. 8, 2022, after 70 years on the throne. She was 96. (AP Photo/Kirsty Wigglesworth)

“The Crown is not a static thing; resting forever on one head. It is moving, alive, divine. The changing face of changing times and if, God willing, it has ordained that I should wear it, then I shall do so on my own terms.” — “The Crown,” penned by young Prince Charles to exiled King Edward VIII, Season 3, Episode 8 (Netflix)

These fictional words from the hit Netflix series rang in my ears when the queen’s death was announced last week. The hope of post-colonized nations struggling to rise under imperial feet is that the symbols of the story, themselves, would revolt and choose another way — that they would choose the way of love.

My hope is that the rising King Charles III — who once was bullied beyond what most could bear, who was blocked from exercising agency over who he would love by the same powers that blocked interracial marriage and established apartheid in South Africa, who will be pressured to silence his voice as his mother was — will use his reign to lead the United Kingdom into a new era, an era of courageous deference to truth. If the new king can do these things, then there is a chance for a world where the sun does not set on the healing brought by his United Kin-dom.

(Lisa Sharon Harper is the founder of Freedom Road, a consulting group dedicated to shrinking the narrative gap. She is the author of several books, including her most recent, “Fortune: How Race Broke My Family and the World — and How to Repair It All.” The views expressed in this commentary do not necessarily reflect those of Religion News Service.)