(RNS) — A retired U.S. Army lieutenant general spurred debate recently when he said that the rise in global attacks on Christians could become a national security threat to the United States.

In an interview with The Washington Times, retired Lt. Gen. William Boykin, a former commander of Delta Force and undersecretary of defense for intelligence, said the attacks indicate an increased religious intolerance that could hit closer to home. He warned that Christian persecution is “only going to grow unless we wake up and start taking a very strong stand against this.”

Boykin is not alone in his fear that America is plunging toward an increasingly anti-Christian future. A 2017 survey conducted by Public Religion Research Institute found that millions of Americans, including 57% of white evangelical Protestants, say that “there is a lot of discrimination” against Christians in the U.S. today.

Those who follow the news have heard countless stories of Christians who have, to one degree or another, experienced some level of pressure about their faith from individuals and institutions in our increasingly secular society. Certainly, domestic trends around religious freedom should be closely monitored.

And yet, at least right now, there is a marked difference between the treatment of Christians in many countries abroad and what believers are facing here at home. American Christians still enjoy broad religious protections under the law, and the intensity of what Christians face here pales in comparison to the depths of persecution suffered by followers of Jesus in many places around the world.

While a Christian college student in New York City might face ridicule for their beliefs, it would be impossible for them to live openly as a believer if they were living in Afghanistan, ranked No. 1 on Open Doors USA’s World Watch List of countries where it is most difficult to be a Christian.

Last year, the Taliban began the restoration of their oppressive rule by going door to door looking for Christian leaders. Those who are identified as Christian face dire consequences — our sources indicate torture or death are possible. The prospect of fleeing the country is largely hopeless. Refugees face chaotic and difficult journeys, risking being kidnapped and trafficked along the way. The governments across the Pakistan and Iran borders are little more accepting of Christians. Given these dangers, unmarried women, widows and older people especially have a very small chance of getting out of Afghanistan safely.

Christian politicians in America have been attacked for their religious convictions, but in places such as Vietnam, Christians face much more than mere criticism. Several house churches in Dak Lok province were recently harassed and fined by police because they publicly honored the United Nations’ International Day Commemorating the Victims of Acts of Violence Based on Religion or Belief.

In the central Vietnam province of Nghệ An, government officials compete to create “Christian-free zones,” and authorities pressure animist relatives to drive Christians from their homes and communities. Some have been forcibly separated from their spouses, children, farm fields and even their wedding rings. The head of the Montagnard Evangelical Church of Christ was tortured and imprisoned until the government yielded to international pressure urging his release. Despite his nominal freedom — the government tracks him constantly — he was kept from attending the International Religious Freedom Summit in Washington this summer.

Similarly harrowing anti-Christian discrimination and violence exist in numerous other countries — from the slaughterous actions of Boko Haram in Nigeria to China’s surveillance state to Iran’s state-sanctioned crackdown.

While we cannot deny that Christians in America today experience discomforts, inconveniences and sometimes even social ostracization, these instances simply do not rise to the level of the horror that countless global Christians face every day. Moreover, there is very little evidence that this level of carnage is coming to the United States soon.

In America, we’re blessed with incredible amounts of freedom. We can attend church, pray, meet with fellow believers and read the Bible whenever we want without legal consequence. But many millions of our brothers and sisters around the world simply cannot do those same things without facing repercussions, often dire.

We should be “wise as serpents,” as the Gospel of Matthew counsels, when it comes to monitoring domestic trends around religious freedom. The liberties we enjoy should be defended at all costs. But we must also invest the resources we have where the needs are so much greater, to defend those around the globe who risk life and livelihood simply for confessing the name of Jesus.

(David Curry is president and CEO of Open Doors USA, which advocates on behalf of those who are persecuted for their Christian faith throughout the world. Open Doors publishes the World Watch List, an annual report on the 50 countries where it is most difficult to live as a Christian. The views expressed in this commentary do not necessarily reflect those of Religion News Service.) 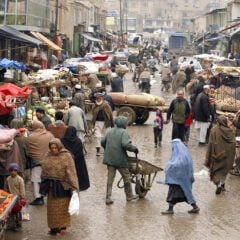 Opinion
Despite its failings, the global war on terror grinds on 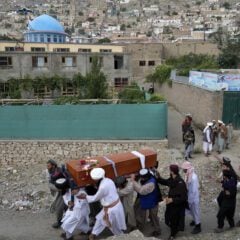