(RNS) — On any given day, the Port Authority Bus Terminal in Midtown Manhattan is crammed with commuters and tourists off to the office or to Broadway’s “The Lion King.” But since August, the world’s largest bus station has also welcomed thousands of asylum-seekers arriving on unscheduled buses from Texas.

“It’s like a little pop-up Ellis Island where people are meeting volunteers with clothes, shoes and socks and other items,” Alexander Rapaport, CEO of a Jewish nonprofit called Masbia (which in Hebrew means “to satiate”), told RNS in a phone call. “There are volunteers telling them where they can go, where bathrooms are, how they can get more help.”

Just before dawn on Monday (Sept. 19), four Masbia volunteers with a truckload of donations arrived at the triage center, set up by the New York City Mayor’s Office of Immigrant Affairs (MOIA), the Port Authority and the governor’s office. They joined a handful of other nonprofits to greet three busloads of migrants (most of whom came to the U.S. from Venezuela), handing them new shoes, deodorant and tote bags labeled “With Love from the Jewish Community.”

Masbia, a Hasidic Jewish organization, is a New York City-based soup kitchen network whose relief team has been distributing shoes at the triage center since mid-August. Rapaport estimates they’ve donated 3,000 pairs of shoes worth tens of thousands of dollars and says many asylum-seekers arrive without shoes or in flip flops. 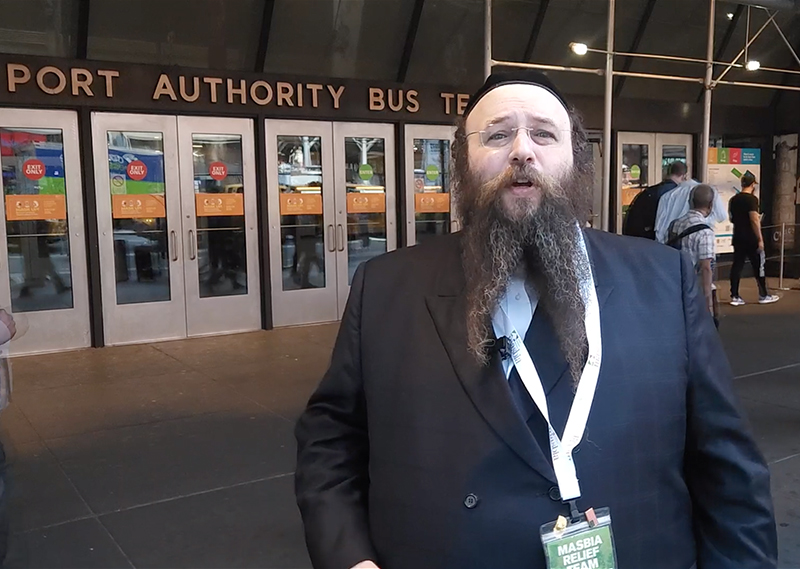 “The people, some of them went through so much horror, they are so broken, all we want to do is give them their humanity back,” said Rapaport.

Ruben Diaz, a chef who oversees the food distribution at Masbia, told RNS he’s given away shoes at the Port Authority roughly a dozen times.

“After being in a bus for two days, without food, shower, you can see they are a little desperate,” he told RNS. “Today there was an older lady, maybe 60 years old, and it was tough seeing somebody at that age coming to find a new opportunity at this time of their life. After she left the Port Authority, what is she going to do? Where is she going to find a job? The language is a barrier. It’s hard that you can’t do much more for them.”

Those arriving on the buses are coming from El Paso, Texas, where Mayor Oscar Leeser is filling buses with migrants, as well as from other Texas towns on buses sponsored by Texas Gov. Greg Abbott. Shaina Coronel, director of communications at MOIA, told RNS that the migrants are asylum-seekers who have a legal right to be in the United States. While some come to New York trying to connect with local friends or family, she said many were unaware of the buses’ destination and have family or court hearings in places like Miami or Chicago. Neither Leeser nor Abbott returned requests for comment in time for publication.

Coronel said lawyers at the triage center can assist the migrants with changing the location for their hearings, while medical staff can intervene for those who’ve been stuck on a bus for 50-plus hours. “Last week, a 2-year-old child came severely dehydrated, and our EMTs were there to transport him to the hospital. We are seeing folks in dire need of medical attention.” 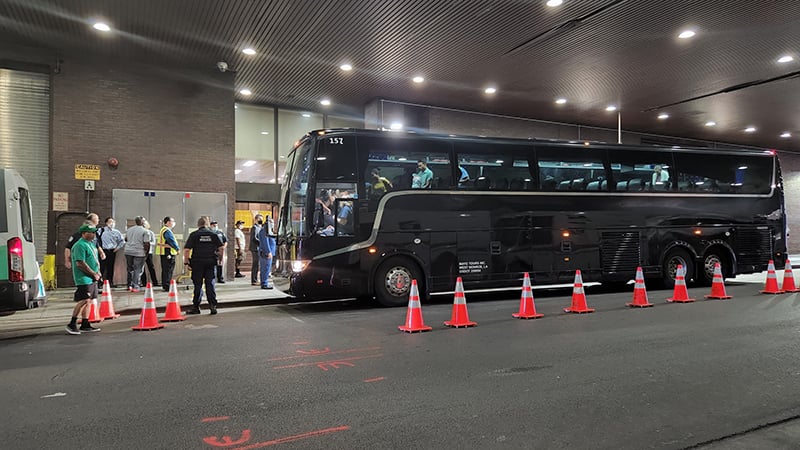 Asylum-seekers exit a bus arriving from Texas at the Port Authority Bus Terminal in Manhattan, New York, on Aug. 19, 2022. Photo courtesy of Masbia

For asylum-seekers who don’t have family nearby and aren’t being transported elsewhere, New York City is ramping up its sheltering capacity. Coronel says the city doesn’t always know when the buses of asylum-seekers will arrive.

At this point, buses are arriving nearly every day.

“It’s almost nonstop,” said Rapaport. “There’s about 50 people on a bus. In the beginning it was less than 100 people per day, and it was only three times a week. Now it’s close to 300 people a day, almost every day of the week.”

Despite the tense circumstances, Rapaport says the volunteers try to be cheerful when the buses arrive, greeting the asylum-seekers with smiles, signs in Spanish and even a model Statue of Liberty as a symbol of welcome. Rapaport says for him, it’s all an extension of his faith. 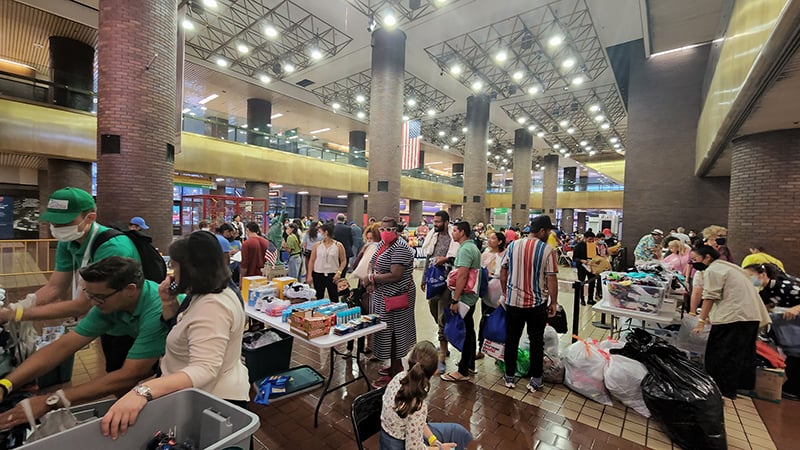 “In Scripture, in the Bible, there is so much about welcoming the stranger, talking about immigrants. You were an immigrant to Egypt, and bringing bread and water to the passer-by. To me it’s an opportunity to put all that into action.”

New York City estimates that over 11,000 asylum-seekers have entered the city in the last few months. As politicians continue to ship asylum-seekers to sanctuary cities and vacation destinations, Rapaport hopes the real lives of the asylum-seekers involved aren’t forgotten.

“The humanity gets overshadowed by all the political chatter,” said Rapaport. “There is a political element, but that shouldn’t be the only element. It’s not a game.”