LONDON (RNS) — An estimated 4 billion people worldwide were predicted to watch the funeral of Queen Elizabeth II on television and online, with Presidents Joe Biden of the U.S. and Emmanuel Macron of France and Canadian Prime Minister Justin Trudeau attending the obsequies in London’s Westminster Abbey in person. The medieval abbey, the sublime music and military processions were all a visual and aural feast, but the event was at its heart a Christian ceremony, with the coffin placed in front of the altar and presided over by robed clergymen.

The queen’s funeral, in this sense, was not entirely representative of Britain’s increasingly secular population. Even its believers are less likely to be Christian than at the start of Elizabeth’s reign, with 2.7 million Muslims, 800,000 Hindus and a half-million Sikhs, among many other faiths. Christians, who once consisted mostly of various Protestants — chiefly members of the Church of England, the Church of Scotland and the Church in Wales — and Roman Catholics, have been joined by a growing Pentecostal movement and other evangelical churches, according to the BBC.

There is nothing like a royal wedding or funeral to remind us that the Church of England remains the official, established church, with the monarch as its Supreme Governor, and since Elizabeth’s death on Sept. 8, we’ve seen it in the ascendant. Yet there are also signs that the late monarch, now-King Charles III and the Church of England have recognized that the time has come to adjust.

In a landmark speech in 2012 at Lambeth Palace, the London home of the Archbishop of Canterbury, the queen said of the Church of England that “Its role is not to defend Anglicanism to the exclusion of other religions. Instead, the Church has a duty to protect the free practice of all faiths in this country.”

She credited the established church with having done so already. “Gently and assuredly, the Church of England has created an environment for other faith communities and indeed people of no faith to live freely,” she said.

The new king has endorsed those words as recently as Sept. 9, the night after his mother died, in his first televised address to the British nation as its king. “The role and the duties of Monarchy also remain,” he said, “as does the Sovereign’s particular relationship and responsibility towards the Church of England — the Church in which my own faith is so deeply rooted.”

But he continued, ”In the course of the last 70 years we have seen our society become one of many cultures and many faiths.”

Nearly 30 years ago, as prince of Wales, Charles articulated concern about other faiths and Christian denominations in modern Britain not feeling included, and controversially suggested that when he became king he should be called Defender of Faiths — plural— rather than the title Defender of the Faith bestowed on Henry VIII by the pope in 1521 and used by England’s monarchs since.

Anglicans reacted harshly to Charles’ gambit, fearing he would not be fully wedded to assuming his role of Supreme Governor of the Church of England when the time came. Even after he rescinded his statement in 2014, the moment haunted Charles. His statement on Sept. 9 came in part to reassure doubters, who then heard him proclaimed king and Defender of the Faith the next day before the Accession Council, who proclaimed him the new monarch.

Then, bit by bit, we saw more evidence of how the king and his advisers, as well as the late queen, through her funeral plans, tried to embrace other traditions. 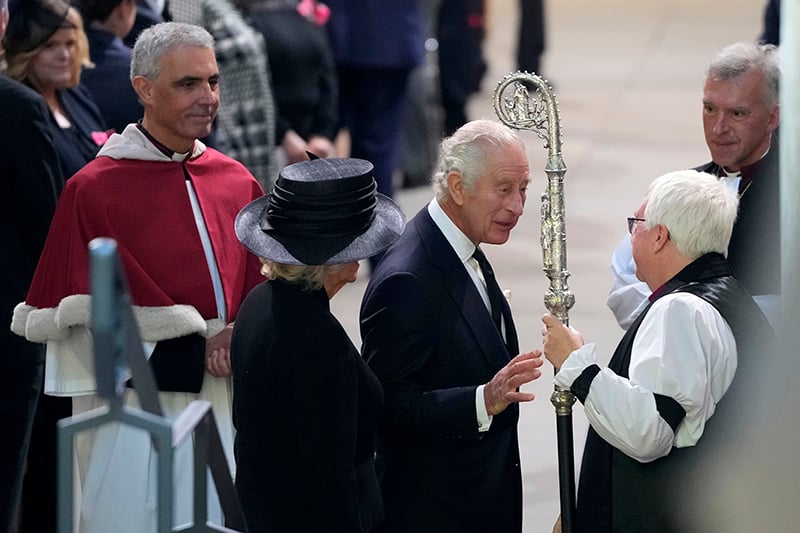 Britain’s King Charles III and Camilla, the queen consort, leave after a Service of Prayer and Reflection for the life of Queen Elizabeth II, at Llandaff Cathedral in Cardiff, Wales, Sept. 16, 2022. (AP Photo/Frank Augstein, Pool)

The Sept. 12 service of thanksgiving for the queen’s life was held at Edinburgh’s St Giles Cathedral, the main church of the Church of Scotland. Representatives of other faiths were in attendance, and the Gospel was read by Mark Strange, primus of the Scottish Episcopal Church, the other main Protestant church in Scotland besides the Church of Scotland.

More surprising, a passage from Paul’s Letter to the Romans was read by Leo Cushley, the Catholic archbishop of St. Andrews and Edinburgh, and included lines often interpreted as encouraging ecumenical dialogue: “We know that all things work together for good for those who love God, who are called according to his purpose.”

When Charles then paid a visit to Northern Ireland, more efforts were made to include the Catholic population, for whom the monarchy has long been a sensitive issue. At St. Anne’s Cathedral in Belfast — where the president of Ireland, Michael Higgins, and Taoiseach (as Ireland calls its prime minister) Micheál Martin were in attendance — Eamon Martin, the Catholic archbishop of Armagh and Primate of All Ireland, offered a prayer; others were said by Methodist and Presbyterian church leaders. At a service during Charles’ stop in Wales, prayers were said by Muslim and Jewish representatives as well as representatives of several Christian denominations.

But a reception at Buckingham Palace for 30 faith leaders on Friday (Sept. 16) — before the new king met any world leaders in London for the funeral, and even before he took part in a vigil with his siblings at the lying-in-state of his mother — spoke volumes about the importance Charles assigns religion in Britain.

Charles welcomed not only the Catholic archbishop of Westminster but Bishop Kenneth Nowakowski of the Ukrainian Catholic Eparchy and Imam Asim Yusuf, telling them that Britain’s sovereign has an “additional” duty — presumably in addition to being Supreme Governor of the Church of England — to protect “the space for faith itself” in Britain. This duty, he said, is “less formally recognized but to be no less diligently discharged.”

He added: “It is the duty to protect the diversity of our country, including by protecting the space for faith itself and its practice through the religions, cultures, traditions and beliefs to which our hearts and minds direct us as individuals. This diversity is not just enshrined in the laws of our country, it is enjoined by my own faith.”

That Charles’ words were backed up by his mother was evident in the state funeral Monday. The specialness of the Church of England and of multifaith, diverse Britain was acknowledged as a procession of religious representatives entered Westminster Abbey in advance of the main funeral party: Jews, Baha’is, Jains, Zoroastrians, Buddhists, Sikhs and Hindus, as well as Chief Rabbi Ephraim Mirvis; Pope Francis was represented by Archbishop Paul Gallagher, the Vatican’s secretary for relations with states.

Reading prayers during the service were the Rev. Iain Greenshields, moderator of the General Assembly of the Church of Scotland; Shermara Fletcher, principal officer for Pentecostal and charismatic relations for Churches Together in England; the Rev. Helen Cameron, moderator of the Free Churches; and Roman Catholic Cardinal Vincent Nichols.

This balancing act will be tested again in the next few months when the new king’s coronation takes place. By then, new coins embossed with Charles’ head will likely have been minted, with the legend “Charles DG Rex, FD”: Latin acronyms for Charles, by the Grace of God, King, Defender of the Faith. While proclaimed as that Defender, he has indeed reinterpreted what it means, even if not altering the wording as he once suggested. It looks as if the reign of King Charles III will be dedicated to offering that protection to believers.

But what of those in Britain of no faith? Soon the results of the most recent national census, of 2021, will be published, showing who believes what, and whether the nonbelievers have grown. Last time, in 2011, a quarter of the population said they had no religion. Finding a way to make them feel connected to a coronation blessed by the Church of England and replete with Christian justifications for monarchical power might be a far tougher test than organizing a procession of Buddhists, Jains and Catholics.

News
Remembering faith leaders who died in 2022: preachers, writers and interpreters of faith
Follow us on Facebook!
Submit your photos to RNS