Shannon Baker, president of the Association of State Baptist Papers, in an email, called Hinkle “such an asset to Southern Baptists,” and said, “I will certainly miss his expressive conversations and intellect as well as his genuine kindness to me.”

For two decades, Hinkle was editor of The Pathway, the official publication of the Missouri Baptist Convention, founded in 2002 amid a feud between conservatives and moderates in the state. Conservative leaders hired Hinkle, a former newspaper editor turned seminarian and Christian journalist, to lead the new publication—meant to rival Word&Way, a longtime Missouri Baptist publication.

Hinkle had recently announced plans to step down at the end of the year to focus on public policy work for the state convention.

“Whenever we would visit we would talk about everything from Jesus, politics, sports, bowties and the state of journalism amongst other things,” said the Rev. Jon Nelson, president of the Missouri Baptist Convention, in an email.

But Nelson remembered Hinkle chiefly as someone who cared deeply about the convention’s churches. In announcing his own retirement, according to a Pathway report, Hinkle said, “It has been a privilege to serve as editor of your state newspaper. It doesn’t belong to me. It doesn’t belong to anyone here in this building. It belongs to you. It belongs to the churches of the Missouri Baptist Convention.”

Born September 14, 1954, Hinkle grew up in Springfield, Tennessee, outside Nashville. He went to work in 1975 at his hometown radio station, then as a reporter and editor in the Air Force for 10 years before working at several metropolitan newspapers, including the Tennessean in Nashville.

Before becoming editor of The Pathway, he was the editor of the Columbia Journal, south of Nashville, and a national correspondent for Baptist Press, the SBC’s official news outlet.

He earned master’s degrees in Christian education and theology from Southern Baptist Theological Seminary, according to his online biography. 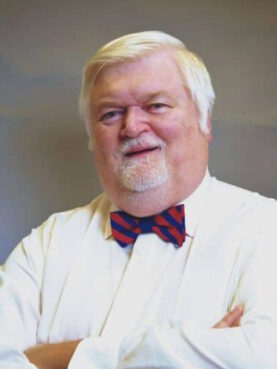 The early years as editor of The Pathway were difficult, as the state convention was involved in a long-running legal battle over control of a major conference center, Word&Way, a Baptist foundation, and other entities. Those lawsuits and controversy in the Missouri convention led to staff restructuring and leadership turnover, Hinkle recalled in reflecting on his 20 years as editor.

“There were many nights I went home, shedding tears in frustration. It felt like the MBC was on the brink,” Hinkle wrote.

The Pathway eventually grew to about 30,000 in circulation, Hinkle added.

Hinkle was no stranger to controversy. In 1997, he wrote “Embattled Banner,” a defense of the Confederate battle flag as a Christian symbol. More recently, he warned of the dangers of critical race theory in the Southern Baptist Convention and criticized the SBC’s Nashville-based Executive Committee for hiring a law firm that was LGBT affirming and for waiving attorney-client privilege in an abuse investigation.

The SBC’s Executive Committee and several other SBC entities cut ties with Guidepost Solutions, which investigated how SBC leaders had dealt with the issue of abuse, after Baptist leaders, including Hinkle, condemned Guidepost for a Pride Month tweet.

He was also outspoken in politics. Americans United for Separation of Church and State filed a complaint against Hinkle in 2012 after he endorsed several candidates in his Pathway column and shared his support for a candidate on social media.

Hinkle was also a champion of Christian journalism, saying there was a need for journalists who pursue truth because of their faith.

“They do not lie or play ‘gotcha’ journalism, but relentlessly search for truth and report it with the goal of glorifying Jesus,” he wrote.

Southern Baptist Convention president Bart Barber said he first got to know Hinkle when the editor published a piece he had written about SBC history—one of the first times his writings had appeared in a denominational publication. The two also shared a commitment to religious liberty.

Hinkle, he said, was a successful editor of a Baptist newspaper at a time when religious journalism, like all journalism, faces steep obstacles. That’s no small matter, he said.

“What Don was trying to do was not just make his newspaper go—but to improve the health of Southern Baptists in Missouri and across the country,” Barber said.  “I never doubted that he was trying to do what he thought was the right thing.”

His colleagues at the Missouri Baptist Convention praised Hinkle’s devotion to his calling.

“Don fought the good fight, kept the faith and finished the race,” The Pathway said in a social media post. “With hope in Christ, we heartily believe he has now received the Lord’s commendation, ‘Well, done, good and faithful servant.’”

He was preceded in death by his wife, Bernadette, who died in 2016.