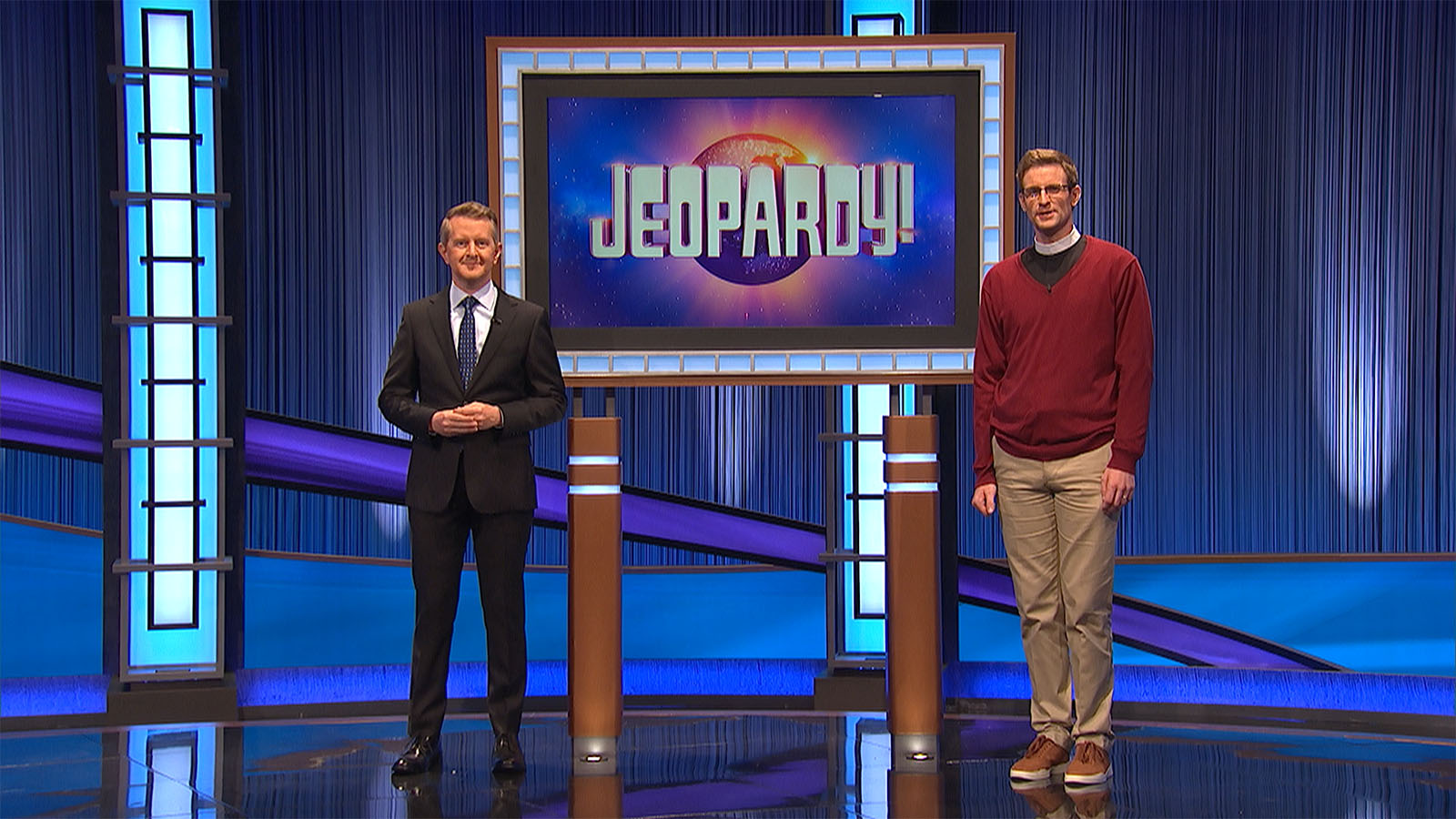 “Jeopardy!” co-host Ken Jennings, left, and the Rev. David Sibley pose together on the set. Photo courtesy of Jeopardy! Productions

(RNS) — “A priest, a truck driver and a grandma walk into a game show.”

It’s not the set-up to a joke, but rather to one of the five “Jeopardy!” episodes in which the Rev. David Sibley appeared last week.

“It was fun, and that was all I wanted to begin with,” the 37-year-old priest told Religion News Service.

Sibley grew up watching “Jeopardy!” in a small town where the show aired on one channel at 7 p.m. and another channel at 7:30 p.m., so he always got a second chance to play, he said.

He started trying out for the show in college, he said, but finally got the call he’d been selected at a moment he was least prepared to play: while he was immersed in the Episcopal Church’s General Convention this summer in Baltimore

Certainly, he said, he never dreamed he’d win — not just once, but four times.

“Has anything in your pastoral or ecclesiastical training prepared you for this moment?” co-host Ken Jennings asked Sibley after his first win in an “Overheard on Set” video posted on the “Jeopardy!” YouTube channel.

“No, absolutely not,” Sibley said, noting he was in shock.

The most pressure he faces as a priest, he told Jennings, is “watching my mouth in certain situations to make sure I’m not saying something inexorably stupid” — though he agreed that skill served him well on “Jeopardy!” He’s at least the third Episcopal priest to appear on the game show, by Episcopal News Service’s count.

Over the course of the week, Sibley ran the board in a category on science, having earned his bachelor’s and master’s degrees in chemistry before discerning his vocation to the priesthood. “Non-Nye Science Guys” was his favorite category ever, he tweeted.

He came close in a category on religion, too, just missing the first clue. In his defense, he said, the answer, stated in the form of a question, that he was late to buzz in on was, “What is the rapture?” and many Christians, himself included, don’t actually believe in the rapture. A huge soccer fan, he also kicked himself for missing a Final Jeopardy question about soccer balls and for mixing up musicians Beck and Ed Sheeran after his ride-share driver played Sheeran’s music nonstop on his way to the studio that day.

But, he said, “It’s OK to be wrong sometimes, and it’s OK to do it in front of a national audience. I think my results stand for themselves, and I had a good time.”

The five episodes were filmed in a single day in August, and Sibley tweeted along with viewers at home when they finally aired last week.

More than anything, he said, he just wanted fans of the show to see he was a “normal person.”

He took some flak online for wearing his clerical collar during one episode, something he said he did at the encouragement of the show’s producers and didn’t feel was all that important either way.

He also took the opportunity to share some of his beliefs on Twitter — after he was made aware that some viewers who had experienced religious trauma were triggered seeing a priest on “Jeopardy!” As a fellow “Jeopardy!” fan, he didn’t want to take that away from anybody else. Tweeting in response, he said, “was the one thing that was in my power to do.”

“It felt like, OK, I’ve got this strange little platform. Let me use it in the best way possible,” he said.

In one thread on Twitter, he shared that he planned to donate 10% of his winnings to his church. In another, he tweeted, “This priest is affirming of the lives, loves, and vocations of LGBTQIA+ people.”

“So for anyone that needs to hear it from a priest: This priest loves you. But more than that? God loves you. Exactly as you are,” he added.

But, in the end, Sibley said appearing on “Jeopardy!” wasn’t about representing the church or building a platform to talk about all the things he cares about. It was just about his love for the game that bills itself as “America’s favorite quiz show.”

“I’m just a nerdy trivia buff kind of guy who wanted to play ‘Jeopardy!’ all my life,” he said

“If I had gone in on that first day and gotten wiped off the board in third place, I would have been thrilled that I just had the opportunity to play. Instead, somehow it turned out I was pretty darn good.”