LOS ANGELES (RNS) — President Joe Biden’s administration is now the latest among national and local leaders to condemn a group of Los Angeles demonstrators who were giving Nazi salutes on a 405 Freeway overpass with several banners, including one that read “Kanye is right about the Jews,” according to photographs and videos circulated online.

White House press secretary Karine Jean-Pierre on Monday said Biden ran for president “to heal the soul of the nation after years of hate and division.”

“As part of this healing, we need to call out antisemitism everywhere it rears its ugly head. These actions in LA are disgusting and should be condemned,” Jean-Pierre said Monday on Twitter, citing a Los Angeles Times story about the demonstration.

The freeway demonstration, which appears to have taken place on Saturday, comes after Ye, the rapper formerly known as Kanye West, was blocked earlier this month from posting on Twitter and Instagram over antisemitic posts the social networks said violated their policies.

In one post on Twitter, Ye said he would soon go “death con 3 on JEWISH PEOPLE,” according to internet archive records reported by the Associated Press, in which he made an apparent reference to the U.S. defense-readiness condition scale known as DEFCON.

On Instagram, the rapper also shared a screenshot of a text message he sent Sean “Diddy” Combs, claiming Combs was controlled by Jewish people, NBC reported.

The nonprofit StopAntisemitism.org, which documents antisemitic behavior, and the Anti Defamation League in Southern California have linked the demonstration to Goyim Defense League, which the ADL describes as a small network of provocateurs that “espouses vitriolic antisemitism and white supremacist themes via the internet, through propaganda distributions and in street actions.” Goyim Defense League parodies the Anti-Defamation League’s name and logo, the ADL said. 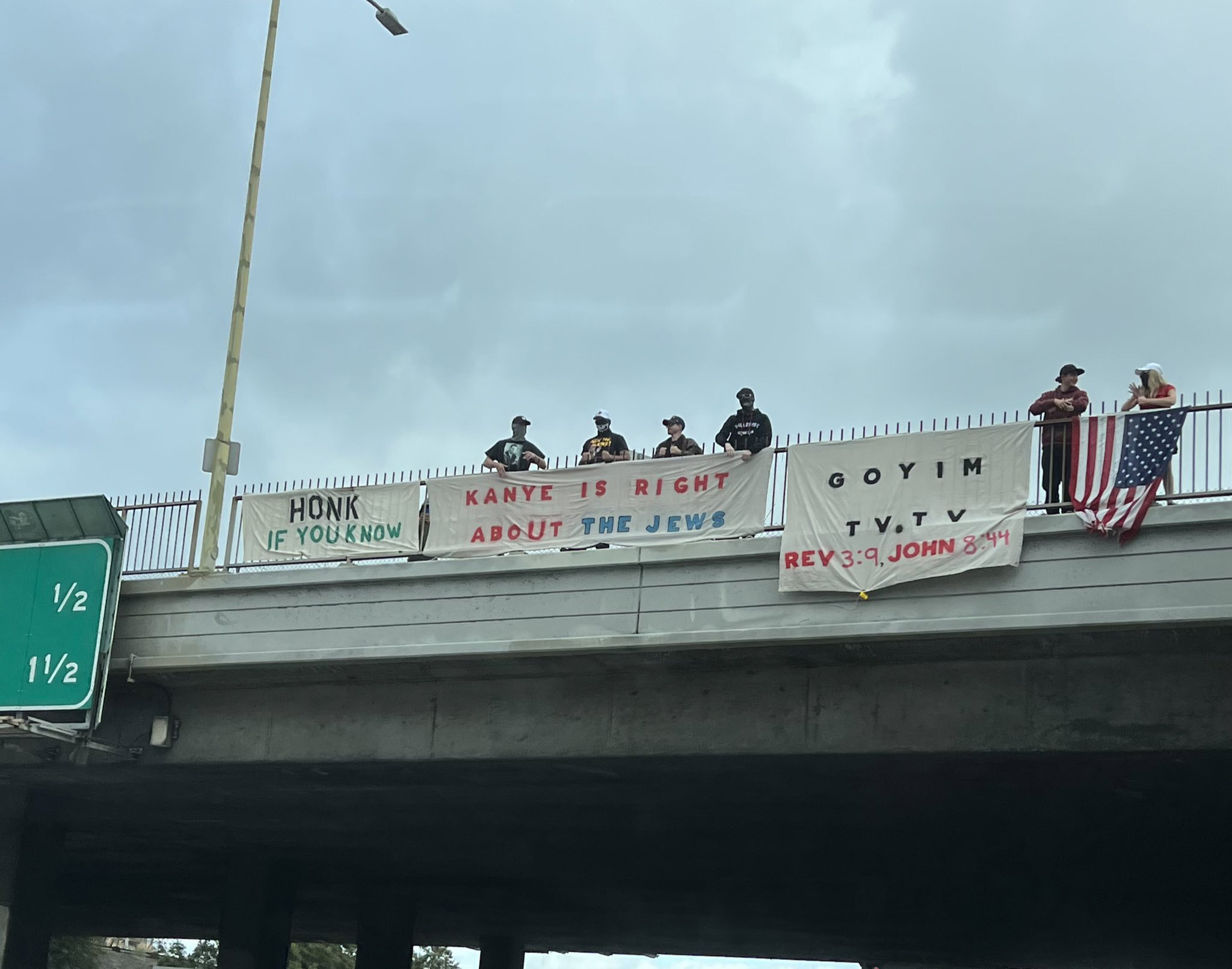 Other banners during the demonstration quoted New Testament scriptures Rev. 3:9 and John 8:44 and also declared “Honk if you know.” Demonstrators also hung an American flag. The Los Angeles and Beverly Hills police departments said they are also investigating a recent distribution of antisemitic fliers in the cities, according to the Los Angeles Times.

“This is an outrageous effort to fan the flames of antisemitism gripping the nation,” said Jeffrey I. Abrams, regional director of ADL Los Angeles, in a statement. “This group, known for espousing antisemitism and white supremacist ideology, is now leveraging Ye’s antisemitism and is proof that hate breeds more hate.”

Abrams joined the growing number of people calling for Adidas to drop ties with Ye.

The group, Segal said, “tries to turn their antisemitism into entertainment and raises money for their activity online.”

Among those calling out Ye is Rabbi Danya Ruttenberg, a public theologian and scholar-in-residence for the National Council of Jewish Women, who crafted a Twitter thread on antisemitic tropes.

“In case you were wondering if celebrity statements had impact on hate in the real world. Antisemitism is real. It exists,” Ruttenberg said.

Los Angeles District Attorney George Gascón on Sunday also spoke out against the demonstration, posting on Twitter that white supremacy “is a societal cancer that must be excised.”

“This message is dangerous & cannot be normalized. I stand with the Jewish community in condemning this disgusting behavior,” Gascón said.

Los Angeles Mayor Eric Garcetti said on Twitter: “L.A. is a city of belonging, not hate. We condemn this weekend’s anti-Semitic incidents. Jewish Angelenos should always feel safe. There is no place for discrimination or prejudice in Los Angeles. And we will never back down from the fight to expose and eliminate it.”