(RNS) — Two months after Samford University, a Baptist school in Birmingham, Alabama, disinvited them from its annual ministry fair, a group of LGBTQ-affirming ministries hosted their own off-campus fair for college students in the area.

“We wanted some sort of positive response to this,” said the Rev. Joe Genau, pastor of Edgewood Presbyterian Church in the suburbs of Birmingham, Alabama, and co-leader of a college ministry that was disinvited from Samford’s fair. “If we’re not going to be allowed on Samford’s campus, we will invite their students to come see what’s out there.”

In front of Edgewood Presbyterian Church, over a dozen students from a handful of schools in the Birmingham area gathered Thursday evening (Nov. 3) at the first event of its kind. At tables, ministry leaders distributed snacks, swag and information about weekly services, college groups and volunteer opportunities. About 15 congregations — including several different protestant groups, a Unitarian Universalist church and a Conservative Jewish synagogue — were in attendance.

The event was the brainchild of Southside Faith Communities, an interfaith coalition of Birmingham congregations. Genau told RNS the fair raised awareness about the LGBTQ-affirming ministries in their area.

“When I talk to folks who have never been to Alabama and with folks who have lived here their whole lives, there’s an equal unawareness that these congregations and ministries have been doing this kind of work for a long time. Some of them have been places of sanctuary, safety, support, affirmation and advocacy for the LGBTQ community in Birmingham for decades,” he said.

He hopes the fair signaled there are faith leaders in Birmingham “who will bend over backwards” to welcome LGBTQ students. Megan Rose Dickey, a senior at Samford and secretary of Samford Prism, an unofficial undergraduate LGBTQ student group, said that message was received.

“As a queer student at Samford, it was really cool to see all these communities band together in response to Samford’s rejection,” they said. “It shows students like me that we belong.” People mingle around the First Church Birmingham booth during a fair of LGBTQ-affirming ministries at Edgewood Presbyterian Church in Birmingham, Alabama, Thursday, Nov. 3, 2022. Photo by the Rev. Julie Conrady

That hope has dimmed, however, in light of the administration’s refusal to welcome other LGBTQ groups and ministries. On Oct. 20, Samford President Beck Taylor denied the application of OUTLaw, an LGBTQ student group at Samford’s law school. In response, according to Dickey, Samford Prism has decided to pause their pursuit of official status and focus on community building.

“Civil discourse on matters of human sexuality and other subjects at the forefront of public debate will always exist at Samford, and the university is not retreating from those discussions,” the president said in an Oct. 20 letter. “Nevertheless, extending official university recognition to a student organization that advocates for beliefs and behaviors contrary to the religious values of Samford would be inconsistent with my responsibilities as president.”

The president added that he planned to remain in communication with the OUTLaw leaders and those concerned about the law school’s LGBTQ students. Samford University shared the president’s letter in response to a request for comment but declined to comment further.

Angela Whitlock, a student at Samford’s Cumberland School of Law and founder of OUTLaw, said the group of over 50 students is still determining how to proceed next. She added that having university approval is critical because it allows the group to be listed on the school website, reserve on-campus spaces and receive the same resources available to other groups.

“It also sends out a message that Samford does not see us as inferior to any other student organization on campus, and that we have a right to assemble and to have open discussions,” said Whitlock.

Samford graduate Brit Blalock, founder of SAFE Samford (Students, Alumni and Faculty for Equality), says her group of over 1,000 members is offering Samford Prism and OUTLaw moral and financial support as they evaluate how to navigate barriers to university recognition. In the meantime, said Blalock, the Affirming Ministries fair was a great next step.

“Everyone was talking about how we need to turn this into an annual event,” said Blalock. “As long as these churches and ministries are going to be kept off of campus, we will keep doing this event to make sure that students at Samford have an outlet to connect with them.” 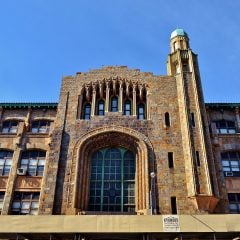