(RNS) — Want to hear about the existential fear many pro-lifers have right now? It isn’t about the failure of the red wave to materialize. It isn’t about the (admittedly terrible and extreme) pro-abortion referenda being passed in states like California, Michigan and Montana.

What pro-life advocates fear most is a woman in a conservative state dying during pregnancy becoming a very public story. Abortion activists and abortion-friendly media will distort and successfully use the case to convince a broad swath of U.S. culture that pro-life laws caused her to die.

This is exactly what happened recently in Ireland, which used to boast both constitutional protection for children in the womb and better health outcomes for women than in abortion-friendly countries, such as its neighbor, England. The facts of the case, which showed the woman’s death resulted from clinical error and not Ireland’s pro-life laws, didn’t matter. Abortion activists cynically used the story of a preventable death of a young immigrant woman to achieve their goal, to fundamentally change Ireland’s constitution and abandon prenatal children.

Many pro-lifers in the U.S. are now laser-focused on not following Ireland’s lead.

One example is Dr. John Bruchalski, an obstetrician/gynecologist and author of the gripping new book “Two Patients.” Bruchalski, who used to provide abortions, changed his mind after a senior neonatal attending physician called him out one evening as he was simultaneously trying to preserve a patient’s pregnancy in one room and, in the room next door, inducing another patient for an early delivery to get rid of her baby of about the same gestational age.

Bruchalski said his colleague pricked his conscience, telling him to stop “treating her patients like tumors.” 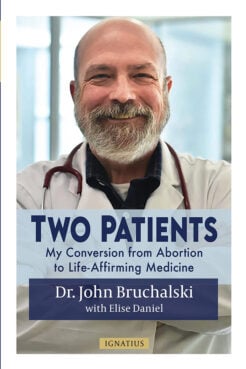 It was then, Bruchalski told me in a recent interview, that it “really hit home for me. I began to question whether or not I had been practicing hypocritically in medicine, based on the baby’s wantedness. Were there one or two patients that I was meant to care for as an OB/GYN?”

As the title of his new book indicates, Bruchalski came to the conclusion that there were two patients he was obligated to care for. It’s this viewpoint that makes him strongly insist that abortion is not health care for women. “We are in a profession of healing,” said Bruchalski. “Imagine a profession that supports birthing new life, looking at the woman in a holistic and integrated way, sees her cycles and fertility as the language of her body, and treats disease, yet sees children in the womb as a clear and present danger — as a sexually transmitted disease that needs to be prevented with violence and poisoning.”

This, he said, is the inverted world we’re living in right now: A “mother with child” has been turned into “a woman with abortion rights.” That transformation is detrimental, medically, psychologically and spiritually.

Bruchalski’s refusal to make the false choice offered by the culture not only results in better outcomes for prenatal children (obviously) — but very good outcomes for women, and particularly economically vulnerable women.

As part of his conversion, which took place in the 1990s, Bruchalski started a new practice, named Tepeyac, in his home with his wife, Carolyn. “We wanted to provide women with better reproductive care that affirms the dignity of the woman at all ages and stages,” he said. Tepeyac “collaborates with women’s fertility and … cares for two patients focusing on the woman because a healthy mom means a healthy baby, and provides care to all women regardless of their financial situation.”

In addition, Bruchalski told me, the practice accompanies mothers through their losses, whether from miscarriages, abortions, stillbirths, early infant deaths or terminally sick children in the womb. The practice also offers a perinatal hospice program to provide medical, emotional and spiritual care for women who have received the heartbreaking news that their baby is congenitally ill. This wonderful practice has now existed for more than three decades.

Bruchalski also founded Divine Mercy Care, a separate nonprofit, to make sure he could serve anyone who came through the doors. Lots of people talk about being committed to caring for the poor, but his practice insists on accompanying women through the entirety of the care.

Divine Mercy Care raises funds so Bruchalski never has to turn away pregnant women in need. It hasn’t always been easy to stay afloat as a practice that doesn’t offer a lot of the services that bring in the most money — such as abortions and sterilizations — and also see Medicaid patients. He’s been able to make it work with generous donations.

This kind of practice may seem like a tall order, and it is, but Bruchalski insists that God wouldn’t ask anything that isn’t possible. And time and time again, decade after decade, he and his team have been able to “live out the fullness of the church’s teaching in medicine without slouching towards political idolatry.”