VATICAN CITY (RNS) — Pope Francis on Tuesday (Nov. 22) dismissed the leadership of the global Catholic charity network Caritas Internationalis and appointed a commissioner to run the organization, citing the need to revise its charter ahead of elections for new leaders next year.

Caritas Internationalis is a hub for 162 charitable organizations in 200 countries aimed at serving the poor and most vulnerable. The Vatican’s Dicastery for Promoting Integral Human Development oversees it.

Among the dismissed officials are Cardinal Luis Antonio Tagle, Caritas’ president, and Aloysius John, the secretary-general. The organization’s vice president, treasurer, ecclesiastical assistant and members of the executive council and board of directors also stepped down.

In his decree, the pope named Pier Francesco Pinelli the temporary administrator of Caritas, with Maria Amparo Alonso Escobar, a Caritas veteran, and the Rev. Manuel Morujão, the Jesuit provincial of Portugal, as his top aides.

A statement issued by the dicastery said a review by an independent panel on Caritas Internationalis’ workplace environment had found no evidence of financial mismanagement or sexual impropriety, “but other important themes and areas for urgent attention emerged from the panel’s work,” the statement read. “Real deficiencies were noted in management and procedures, seriously prejudicing team-spirit and staff morale.”

Pinelli, who was a consultant for Caritas, headed the panel.

The statement said that Pinelli and his aides will “provide stability and empathetic leadership” at Caritas Internationalis, adding that the interruption of the current administration will not halt charitable work done all over the world; “on the contrary, it will serve to strengthen such service.” 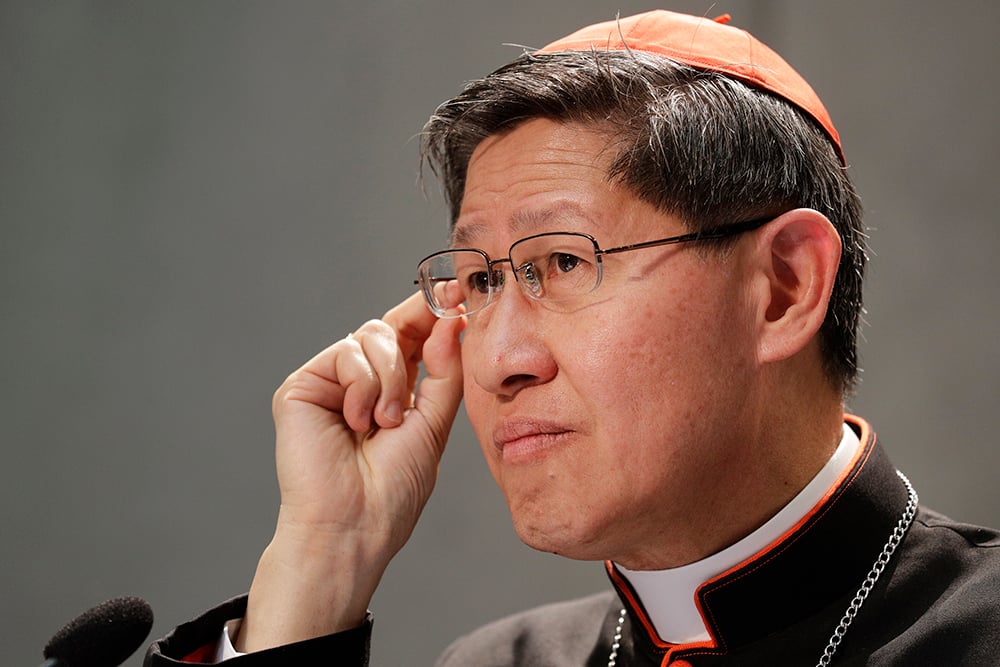 Pinelli will work with Tagle and Cardinal Michael Czerny, the head of the Dicastery for Promoting Integral Human Development, to prepare for the next General Assembly of Caritas, planned for May 2023, when new leadership will be elected. The last election took place at the 21st General Assembly in 2019.

PInelli, who describes himself as a “happily married boomer,” has three decades of experience in management and consultancy after earning a degree in engineering. Formed in Ignatian spirituality, Pinelli also has worked closely with Jesuit foundations and institutions.

More than 100 Caritas representatives happened to be in Rome for a two-day day conference (Nov. 21-22) on the theme “Together, Serving out of Love — Strengthening our Fraternal Cooperation.” According to a statement released on Saturday, the members met “to reflect on how to strengthen local leadership within the Confederation and enhance fraternal cooperation among member organizations.”

The statement went on to explain that the umbrella organization was facing challenges brought on by the pandemic and new conflicts arising in the world. “The reflections and the discussions on the way forward will help reflect on new strategies for collaboration to combat poverty and save lives,” it said, adding that the conference would provide the basis for the upcoming General Assembly.