(RNS) — As a teacher, I helped new students, concerned about their roles in the classroom, find their way. Shy and anxious young people blossomed into confident scholars, integrated in their communities, when they saw that they had unflinching support.

As a pastor, I tended to my congregants’ interest in helping those in need. That assistance was ostensibly for the needy, but it was as much for the church community, which only grew stronger the more it provided for our neighbors.

As a pastor and a teacher, and now in law school, where I focus on immigration law, I recognize that the spiritual depth of any community can be measured by how it treats people in these in-between spaces. It’s exactly the test Americans now face in the aftermath of the war in Afghanistan.

After the fall of Kabul, thousands of Afghans who had risked their lives alongside American forces were evacuated to the United States. Many families left behind are now targeted by the Taliban regime.

U.S. law currently provides no straightforward path to permanent resettlement or reunification for these Afghans and their families.

Many will be shoehorned into immigration processes not designed for their situation. They will be forced to apply for asylum — a complex and often traumatic process that is fraught with opportunities to be rejected and deported back to danger.

Some may be denied asylum because, in the chaos of the U.S. military withdrawal, our government recommended they destroy the very evidence the asylum office now demands. More may be denied because they cannot disclose certain evidence that the U.S. government considers classified. Others may be denied under an interpretation of asylum law that views their fight against the Taliban — the very battle that America asked them to fight — as a prohibition on their asylum claim.

Congress can pass the Afghan Adjustment Act to do right by these wartime allies. We’ve done it before. 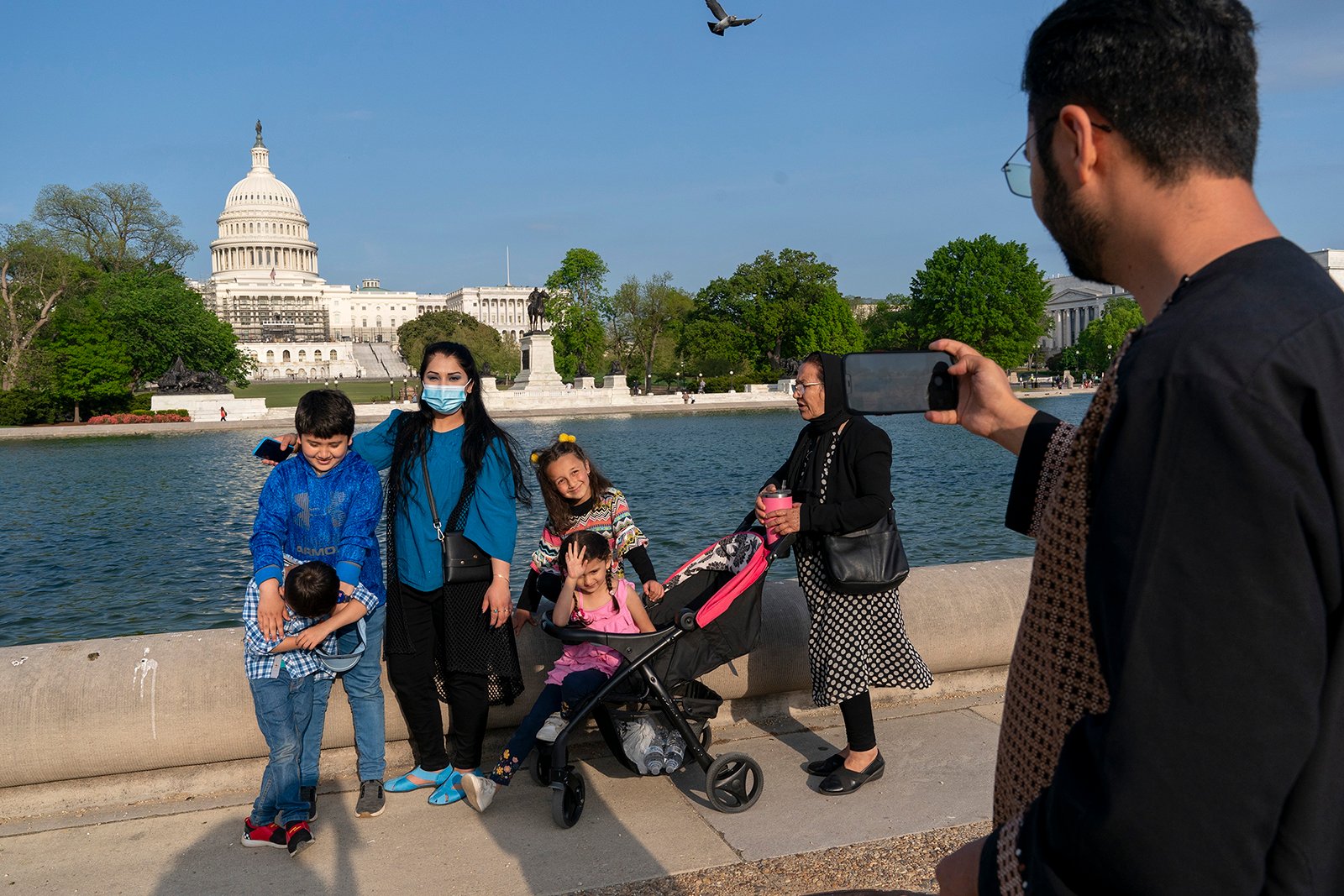 The Safi family celebrates Eid by taking family photographs on the National Mall, May 3, 2022, near the U.S. Capitol in Washington. The family was evacuated from Afghanistan and is trying to make a new life in the U.S., while in immigration limbo. (AP Photo/Jacquelyn Martin)

Nearly 50 years ago, as the Vietnam War was ending, millions of Southeast Asian refugees fled political persecution, hundreds of thousands of them in small boats. Among these “boat people” was a 3-year-old girl who would eventually become my wife and the mother of my two beautiful, brilliant daughters.

After her family settled in rural Illinois, they spent many years learning English, adjusting to the weather and making a new life in America. Today her family is spread across the United States, raising a new generation of thriving multicultural Americans. Their story, while full of difficult chapters, is one of hope and inspiration — the kind of story that makes me proud to be American.

This past summer, while clerking at a Minneapolis immigration law firm, I volunteered with The Advocates for Human Rights on the cases of two former Afghan intelligence officers who had fought alongside American forces and evacuated when Kabul fell. Both men eagerly showed me pictures of their wives and children who were still hiding in Afghanistan, and desperately asked for help bringing their families to the U.S.

It was nearly impossible not to see in them the image of my wife’s family, who were able to immigrate to the U.S. together and were granted green cards quickly because Congress passed special laws at the end of the Vietnam War providing a straightforward path to citizenship for refugees from Southeast Asia.

Without support similar to what the Vietnamese refugees received from the U.S. government, these Afghans are in danger of losing their legal status in the United States and being forced to return to their country, where they will almost certainly face torture and even death.

It is an act of cruelty that Congress is failing to give our Afghan allies, who have experienced violence and loss that few of us can imagine, a promise of permanent legal status in the United States.

Congress should do what it did for the large, displaced population of Southeast Asian allies for the heroic men and women who supported the United States’ vision in Afghanistan.

The Afghan Adjustment Act would provide the same type of path to permanent residence that my wife and other Southeast Asians followed. Afghans who qualify could submit applications and undergo security vetting and interviews to obtain green cards and remain in the U.S.

Our Afghan allies, who for two decades risked their lives to support the U.S. mission in their country, deserve the chance to build new lives in the United States, just as my wife’s family did.

As a teacher I welcomed hundreds of new kids to permanent homes in the classroom. In my pastoral work, I engaged with myriad communities to find fellowship.

I know we, as a country, can prove our spiritual depth by removing additional hardships on the path to a permanent welcome for our Afghan allies. To do so, Congress must pass the Afghan Adjustment Act.

(Jeff Heidkamp is a law clerk at Davis & Goldfarb, a Minneapolis-based immigration law firm, and has had a 20-year career as a pastor and public school teacher. The views expressed in this commentary do not necessarily reflect those of Religion News Service.)

Opinion
Taliban will be the losers for denying women an education
Follow us on Facebook!
Submit your photos to RNS