(RNS) — A prominent Roman Catholic priest has been reinstated to his south Chicago parish after an investigation found that abuse charges against him were not credible.

The Rev. Michael Pfleger, longtime pastor of St. Sabina Catholic Church, was suspended in October after the Archdiocese of Chicago received an allegation of abuse against him.

The archdiocesan Independent Review Board and Office of Child Abuse Investigation and Review, with help from outside investigators, reviewed the allegations against Pfleger, Cardinal Blase Cupich told St. Sabina parishioners in a letter Saturday (Dec. 10).

“The Review Board has concluded that there is no reason to suspect Father Pfleger is guilty of these allegations,” he wrote.

Plefger had been accused of abuse once before and was suspended as the charges were investigated, then reinstated. His most recent suspension was based on alleged events from three decades ago.

The 73-year-old priest, known for his activism against gun violence and for social justice, appeared at 5:00 p.m. Mass at St. Sabina, a prominent Black Catholic congregation, on Saturday, according to the Chicago Sun-Times.

“This has been very painful,” Pfleger told the congregation. “Thank you for your love, for your support and your prayers.”

Before his first sermon back at St. Sabina on Sunday (Dec. 11), Pfleger thanked the congregation for standing by him during his suspension.

He referred to the charges against him as “a bunch of garbage” and claimed that for years people have conspired against him because of his activism.

“You got the wrong one,” he said in a video of the sermon posted on the church website.

Despite the troubles he’s faced, Pflger said he has no plans to slow down.

“I keep saying, you are 73, what are you doing? Why are you working so hard?” he said. “But until God tells me—I’m going to do what I was called to do and believe I was born to do.”

Eugene Hollander, the lawyer for the alleged abuse survivor, told the Sun-Times that the review board’s finding was hurtful to his client.

“We think that the review board’s finding that the allegations were unfounded will discourage other victims,” Hollander said.

Cardinal Cupich acknowledged that Pfleger’s suspension had been hard on St. Sabina.

“I want to recognize that these months have taken a great toll on Fr. Mike and all of you, and I am committed to do everything possible to see that his good name is restored,” he wrote.

Cupich reminded the congregation about the joy of Christmas and commended Pfleger as he returned to ministry. Pfleger is expected to address the congregation during Mass at St. Sabina on Sunday (Dec. 11).

“As I assure you of my prayers,” Cupich concluded, “I ask that you do all you can to welcome back Father Pfleger so that he can once again take up the ministry that has distinguished St. Sabina in the archdiocese and beyond.”

This story has been updated with comments from Pfleger at Sunday mass. 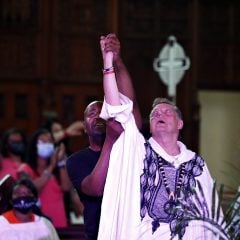