(RNS) — Two years after suffering a devastating fire, the leaders of Middle Collegiate Church are awaiting the resolution of a dispute over its historic façade.

When the six-alarm fire destroyed most of the historic building in Manhattan’s East Village, the façade remained standing. But church officials, after spending $4.2 million on fencing, steel bracing and other measures to secure the limestone front of the building, have determined it too must be demolished in order for the church to move ahead with plans for a new structure.

“Even though it is still standing, it actually really did burn up,” said the Rev. Jacqui Lewis, senior minister of the multiethnic congregation, in an interview Monday (Dec. 12). “It just didn’t fall down.”

In a mid-November report, citing investigative work by the church’s architect and engineering and safety experts, the church said maintaining the façade is no longer safe for people, including workers, near the site. Firefighters work to extinguish a fire that erupted from the building next to Middle Collegiate Church on Dec. 5, 2020 in New York. The historic 19th-century church in lower Manhattan was gutted by the massive blaze. (AP Photo/Yuki Iwamura)

Some preservationists, however, disagree, and New York City’s Landmarks Preservation Commission continued its consideration of the church’s request for a “certificate of appropriateness” at a Tuesday hearing that was livestreamed via YouTube.

“We expected to make the façade a part of our new church design,” Lewis told the commission, “only to come to realize that the façade was a burden, and a barrier.”

She asked that the commission allow the neo-Gothic façade to be demolished because equipment operators have no access to the location otherwise, as they can’t go through the next-door site where the fire began.

“Our face, our façade, is broken, and stands exactly, exactly where it can’t be if we’re to move forward,” Lewis said.

Andrew Berman, executive director of Village Preservation, said in written testimony to the commissioners in November that his historic preservation organization would like to see the church remain at its longtime site but does not agree with Middle Collegiate’s claim about the façade.

“If there were a danger to the public or an inability to maintain this façade safely, the Department of Buildings would make such an evaluation and order the structure down, as we have all too often seen them do,” he said. “They have not done so in this case.” Lower East Side Preservation Initiative, a local not-for-profit group, has argued that the demolition of the façade would hurt the “special character of this very important historic district,” and the group urged a “full and independent analysis.”

After spending a fifth of the $21 million the church received in insurance money, she said, Middle Collegiate would like to use the remaining money for the future building and upcoming programs. The church is in the midst of a $15 million fundraising campaign that has gained $3 million since its July kickoff.

Lewis said the church also has decided it does not want to sell the site or move in with another church.

“The way to be in our neighborhood is to take down the façade and build something else,” she said, adding that it’s the church community that can continue to live out the history started centuries ago.

“What’s historic about that space is us,” she said. “And the brick and mortar is not us.”

Building experts hired by the church provided additional information during the commission hearing and in a written report presented to the commission.

“Further testing is not required to assess the extent to which original material is already demonstrated as needing removal,” the supplemental statement concludes. “With access limited to the Second Avenue side, and prevented by the damaged gable, exterior demolition is warranted and appropriate.”

Ken Fisher, the lawyer representing the church, said the engineer hired by the commission to consider the application noted that the limited access to the site means use of equipment to do additional investigatory work would require that a portion of the façade be removed.

“The test for this application is not whether or not the remnants are going to be capable of standing on their own indefinitely,” Fisher told the commission Tuesday. “The test is whether or not it’s appropriate to leave them standing there and prevent the church from being able to rebuild.” 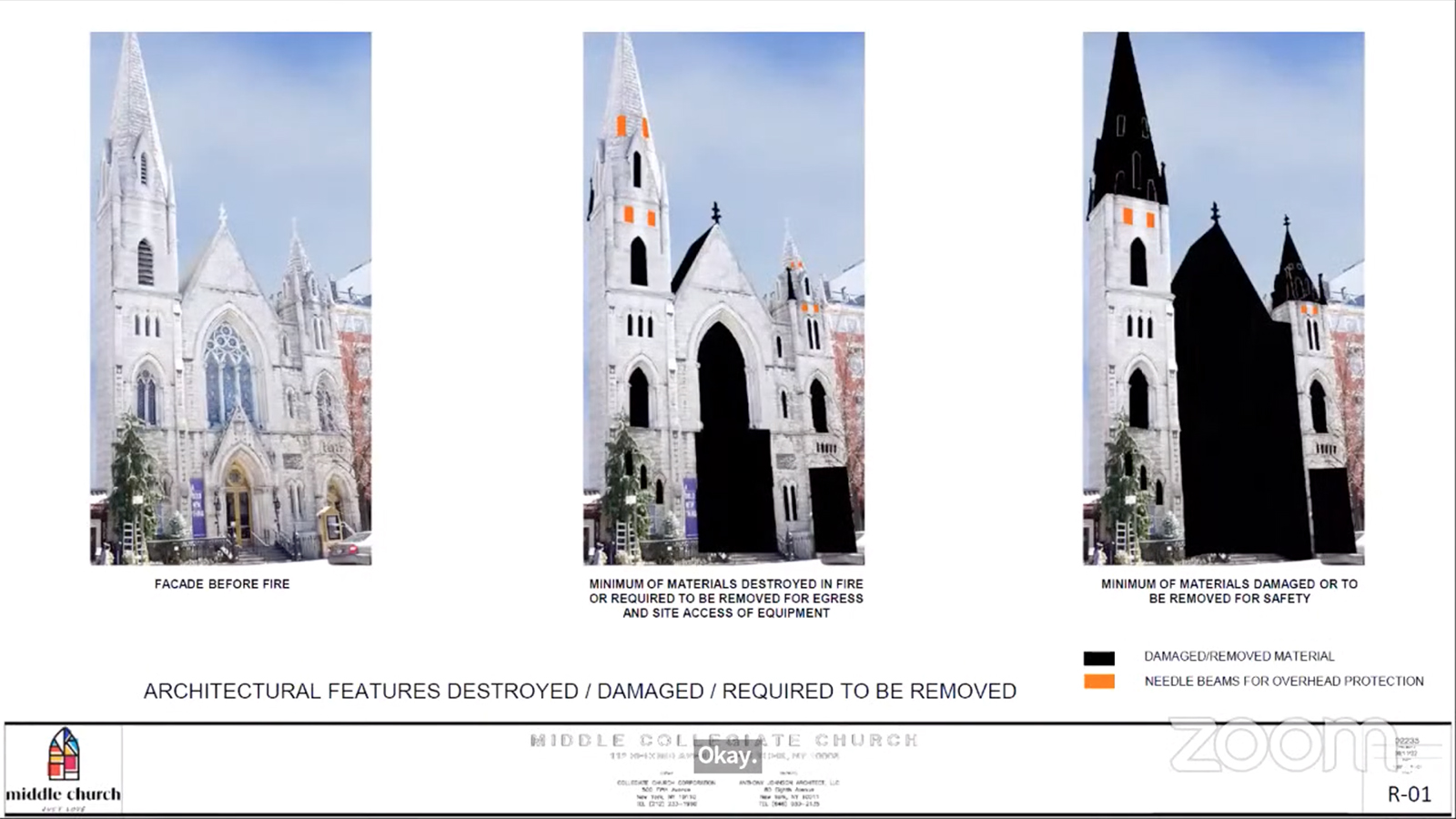 The one way Lewis said the church sees the façade remaining would be if the site were sold and an organization with more money chose to restore the façade.

“That is still an option,” she said in an interview. Noting that she’s an African American woman activist, she added, “I do not want my spot, my legacy to be the place that used to be my church that now is luxury condos. I don’t want that.”

Supporters of the church’s decision have written to the commission and other preservationist entities, including one who listed “almost innumerable” services the church has provided and should again.

“The experts have already weighed in,” said Jorge Fontanez in a letter to the Lower East Side preservation group, noting that the façade was featured in his and his husband’s 2013 wedding photos. “The façade is not safe. What’s more important, the façade or a space for our congregation? A space for the congregation and the support it provides the community.”

New York Assemblyman Harvey Epstein also provided written testimony to the commission in support of the church in the community he represents.

Commission Chair Sarah Carroll said Tuesday she and the other commissioners would consider the new information they received and discuss it at a meeting in January.

In the meantime, some Middle Collegiate congregants have been gathering at East End Temple, a Manhattan Reform synagogue 10 short blocks away from the site of the fire. As many as 130 have attended in person and hundreds more watch online.

After her Sunday sermon at their temporary home in the synagogue, Lewis and members walked to the site a day before the two-year anniversary of the fire. They prayed and joined in a new version of an anthem from the civil rights movement.