(RNS) — Rod Snyder and Alex Orton were in a celebratory mood on the South Lawn of the White House in mid-December when President Biden signed the Respect for Marriage Act.

They milled around with thousands of others before taking their seats on white folding chairs facing a small stage festooned with creamy white poinsettias to hear the president and watch him wield a pen and affix his signature.

The landmark law, which provides federal protections for same-sex and interracial couples, is an important milestone for the couple who have been in a relationship for eight years.

Both grew up in conservative Christian homes. Both attended Christian colleges that did not affirm homosexuality. And both were closeted well into early adulthood; Orton was in his mid 20s, Snyder in his early 30s, when they came out.

They are among thousands of LGBTQ Christians fighting for the acceptance they were denied by their families, churches and schools. 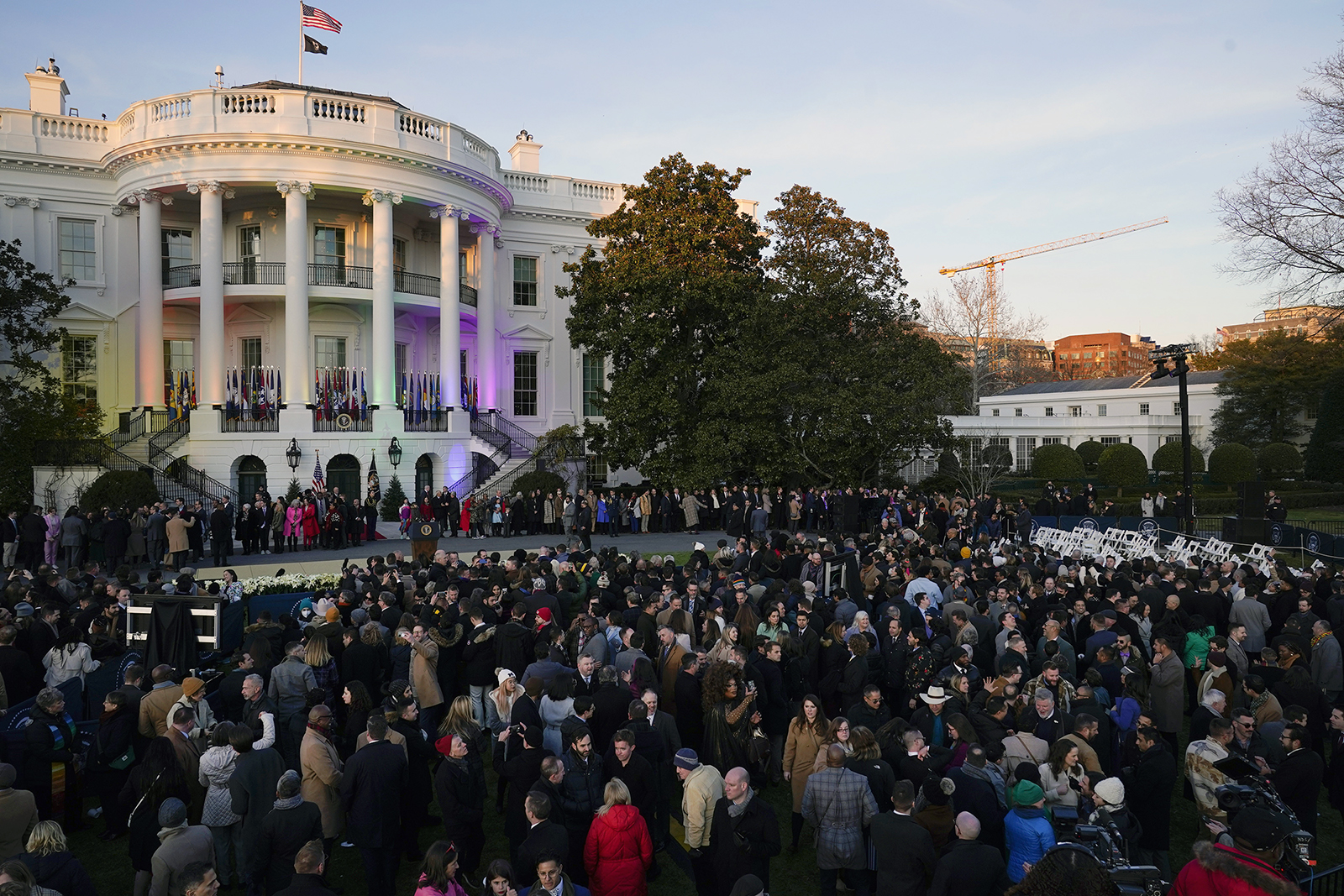 After finding each other on the OK Cupid dating site and settling down in West Virginia, they still felt anxious about the future of LGBTQ protections, especially after the Supreme Court struck down abortion rights this summer, with Justice Clarence Thomas, in particular, hinting gay marriage was on questionable legal footing.

“West Virginia is not a state that will codify gay marriage,” said Snyder, 42, a senior adviser in the Environmental Protection Agency. “It’s not going to happen. The Respect for Marriage Act in red states like West Virginia provides a measure of protection and reassurance. That’s so critical for us. It’s fundamental.”

For Orton, a teacher and administrator in a public high school in next-door Loudoun County, Virginia, the act’s passage was also important at a time when LGBTQ gains are under attack. Just last year, Virginia gubernatorial candidate Glenn Youngkin seized on conservatives’ concerns over how schools teach about transgender people. Youngkin won the governor’s seat, leading many to wonder what would be next for LGBTQ school teachers.

Just as the two had celebrated on the steps of the Supreme Court in June 2015 when the justices ruled in Obergefell vs. Hodges that same-sex marriage is constitutionally protected, so too, they wanted to be there for the signing of the Respect for Marriage Act.

Snyder, a West Virginia native, grew up attending an Assemblies of God church, a Pentecostal denomination that views homosexuality as a sin. He attended Christian schools, graduating from Faith Christian Academy in Martinsburg. For college, he selected Eastern University, a Pennsylvania school affiliated with the American Baptist Churches USA.

Eastern did not have an affinity group for LGBTQ students when Snyder was there. And even if it did, he was too closeted to even consider such an identity.

“I was so far from being able to accept myself or reconcile anything related to my faith and sexuality,” he said. “It was outside the realm of possibility.”

Snyder nevertheless excelled in school, serving as student body president and impressing his teachers as engaged, thoughtful, respectful — a model student, said one of his professors, Kathy Lee. After graduating in 2002 with a degree in political science, he served as president of the Young Democrats of America, a national group that trains up-and-coming Democratic leaders.

Orton grew up in the Church of Jesus Christ of Latter-day Saints. His ancestors walked the Mormon trail to Utah, and his parents and older sister attended Brigham Young University. When it came time to choose a college, Orton said, “I never considered anything else. It was all I knew.”

During his time at Brigham Young, the church was campaigning for Prop 8, the 2008 California ballot initiative intended to ban same-sex marriage. Students were encouraged to phone-bank to help pass the measure. (It succeeded but was later overturned.)

Orton did not phone-bank. But he did marry a woman.

Three years into their marriage and after moving to Washington, D.C., so his wife could attend law school, the couple separated, and Orton came out as a gay man.

“Because we both came from religious backgrounds that were not affirming, it created a sense of commonality from the very start,” Snyder said. 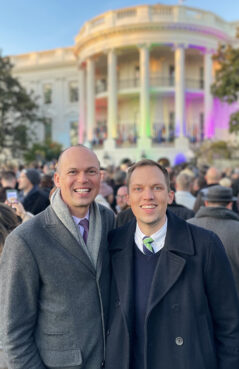 Rod Snyder, left, and Alex Orton pose on the South Lawn of the White House during the Respect for Marriage Act signing ceremony on Dec. 13, 2022, in Washington. Photo courtesy of Rod Snyder

“We got each other,” added Orton.

But the couple also faced the difficult task of telling their families they were gay and introducing their life partners.

“We grew up with a gospel of legalism and judgment,” said Emma Lee, Snyder’s younger sister. “My mom had a difficult time with it at first.”

“It took several years for my family to fully accept not only me but our relationship,” he said.

Some family members still struggle, though they have come to love both men.

In the 10 years since he graduated, several of Orton’s classmates from BYU have also come out, and most are no longer active in the church. The school’s honor code still bans LGBTQ students from dating in public, holding hands and kissing their partners. Though there is now an off-campus affinity group for queer students, it is not an officially recognized student organization.

Eastern University, meanwhile, amended its policies earlier this year to allow for the hiring of LGBTQ faculty and to add sexual orientation to its non-discrimination statement. Its membership in the Council of Christian Colleges and Universities has since been put on hold.

RELATED: Eastern University on hold from CCCU after dropping ban on LGBTQ faculty

Snyder, who was invited to participate in a task force on sexuality begun in 2014, said he’s proud of his alma mater.

In 2016, Snyder ran on the Democratic ticket to the West Virginia House of Delegates. (His father, Herb Snyder, was a two-term state senator.) Drafting a statewide non-discrimination law was one of the issues he ran on.

He lost the race but not his enthusiasm for public policy or protecting the dignity and humanity of LGBTQ Americans.

Neither Snyder nor Orton is active in church anymore, though they will occasionally take in a service at Foundry United Methodist Church, an open and inclusive congregation not far from the White House.

He and Orton were thrilled when it appeared that there might be bipartisan support for the Respect for Marriage Act. As a government employee, Snyder was able to secure two tickets to the Dec. 13 signing ceremony.

Conscious of the day’s symbolism, he decided the day before to buy Orton a ring. Worried the tungsten piece might set off the metal detector at the White House gate, he asked Orton to arrive 30 minutes earlier. He didn’t want to have to pull out the ring box in the security line and spoil the surprise.

Just before the speeches started — Senate Majority Leader Chuck Schumer, House Speaker Nancy Pelosi and Vice President Kamala Harris all spoke — he motioned to Orton to walk a few steps away from the crowd.

He told Orton he couldn’t imagine spending the rest of his life without him. Snyder then pulled the ring box out of his pocket.

“Will you marry me?” he asked.