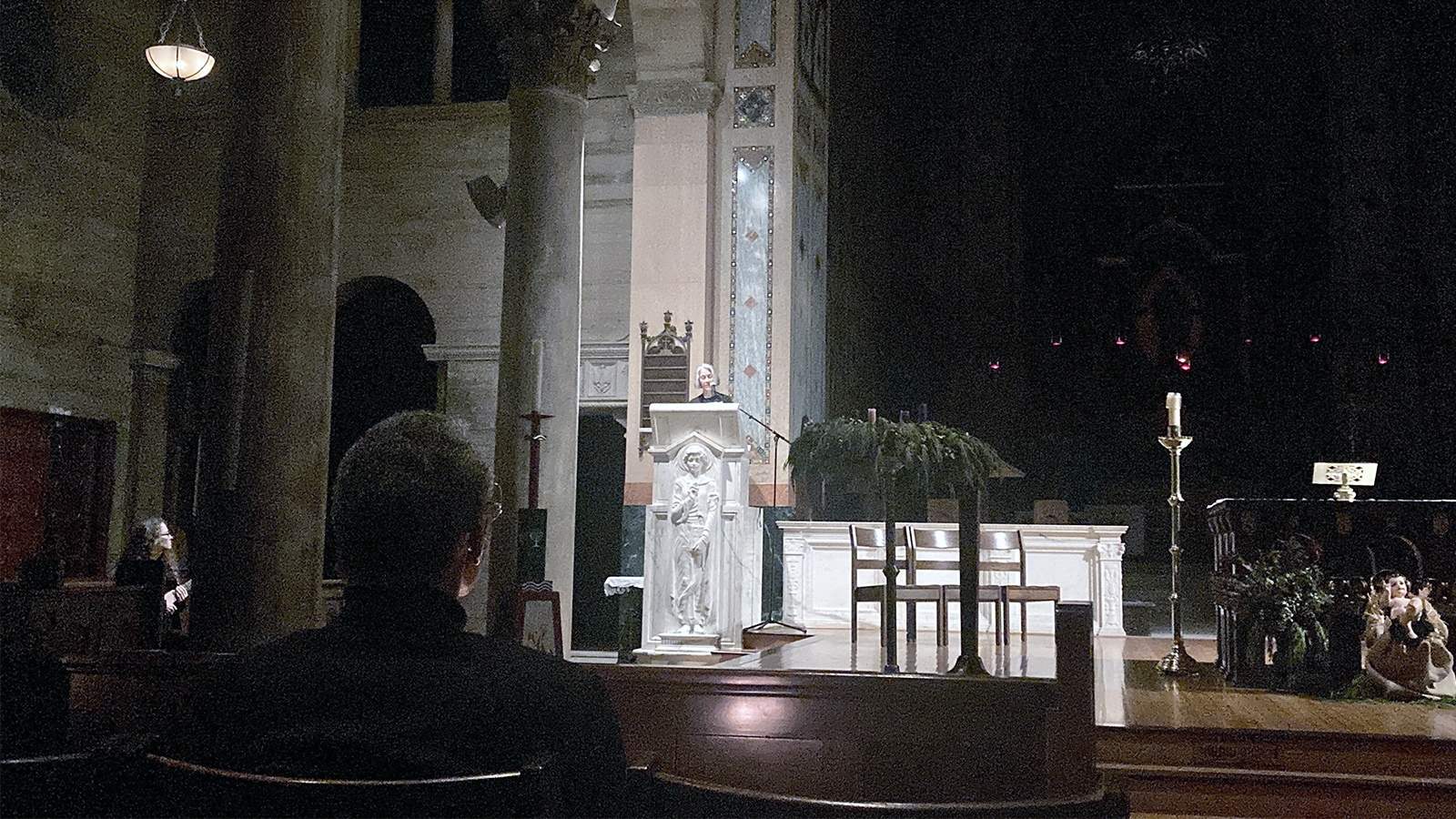 Carol Potter, behind the lectern, offers a prayer for the lives lost in connection to the Jan. 6 insurrection during a vigil at St. John’s Episcopal Cathedral in Los Angeles, on Jan. 4, 2023. RNS photo by Alejandra Molina

LOS ANGELES (RNS) — On a rainy night in the stony Romanesque St. John’s Episcopal Cathedral, Carol Potter offered a prayer on Wednesday (Jan. 4) for those who died two years ago in the violent storming of the U.S. Capitol that also left thousands injured as rioters sought to overturn the results of the 2020 presidential election.

Potter, a Christian and Buddhist, read “Prayers of the People,” adapted from the Book of Common Prayer, at a small vigil marking the second anniversary of the insurrection, one of several interfaith and Christian events being held around the country this week.

In her prayer, Potter made no distinction between law enforcement and rioters, praising God “for all your servants who have finished their course in your faith and fear.”

“Grant to them eternal rest,” she said.

Potter found it important to pray equally for all involved, even those who, she said, may have had a different understanding of Christianity, acknowledging that some of the attackers carried flags bearing Christian nationalist symbols or wore them on their clothing. “We’re all children of God,” said Potter. 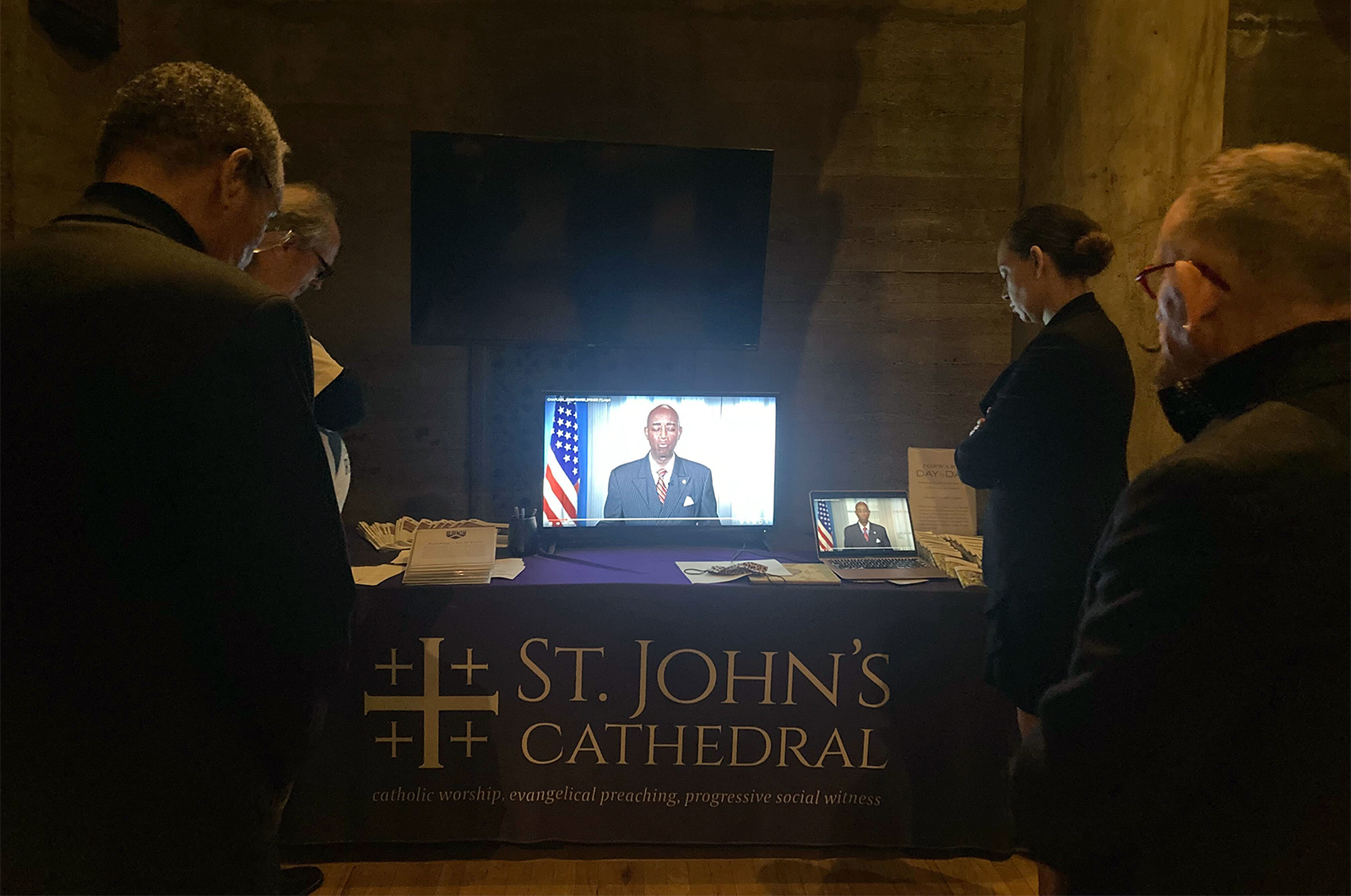 Jenna Kyle, second from right, of the Los Angeles Poor People’s Campaign, and others watch a recorded prayer by U.S. Senate chaplain Barry Black during a vigil for the second anniversary of the Jan. 6 insurrection at St. John’s Episcopal Cathedral in Los Angeles, on Jan. 4, 2023. RNS photo by Alejandra Molina

Sponsored by the Los Angeles Poor People’s Campaign, the event at St. John’s, the seat of the Episcopal Diocese of Los Angeles, in LA’s South Central neighborhood, is a “strong showing of faith done the right way,” said organizer Jenna Kyle.

“We’re using the Christian faith to advance the ideas of Jesus and not this right-wing manipulation of faith,” Kyle said.

The anniversary comes about two weeks after the Jan. 6 Select Committee released its final report, an 845-page document that mentioned Christian nationalism just once, and only in passing, despite evidence of its influence among some of the rioters carrying crosses or invoking the name of Jesus. 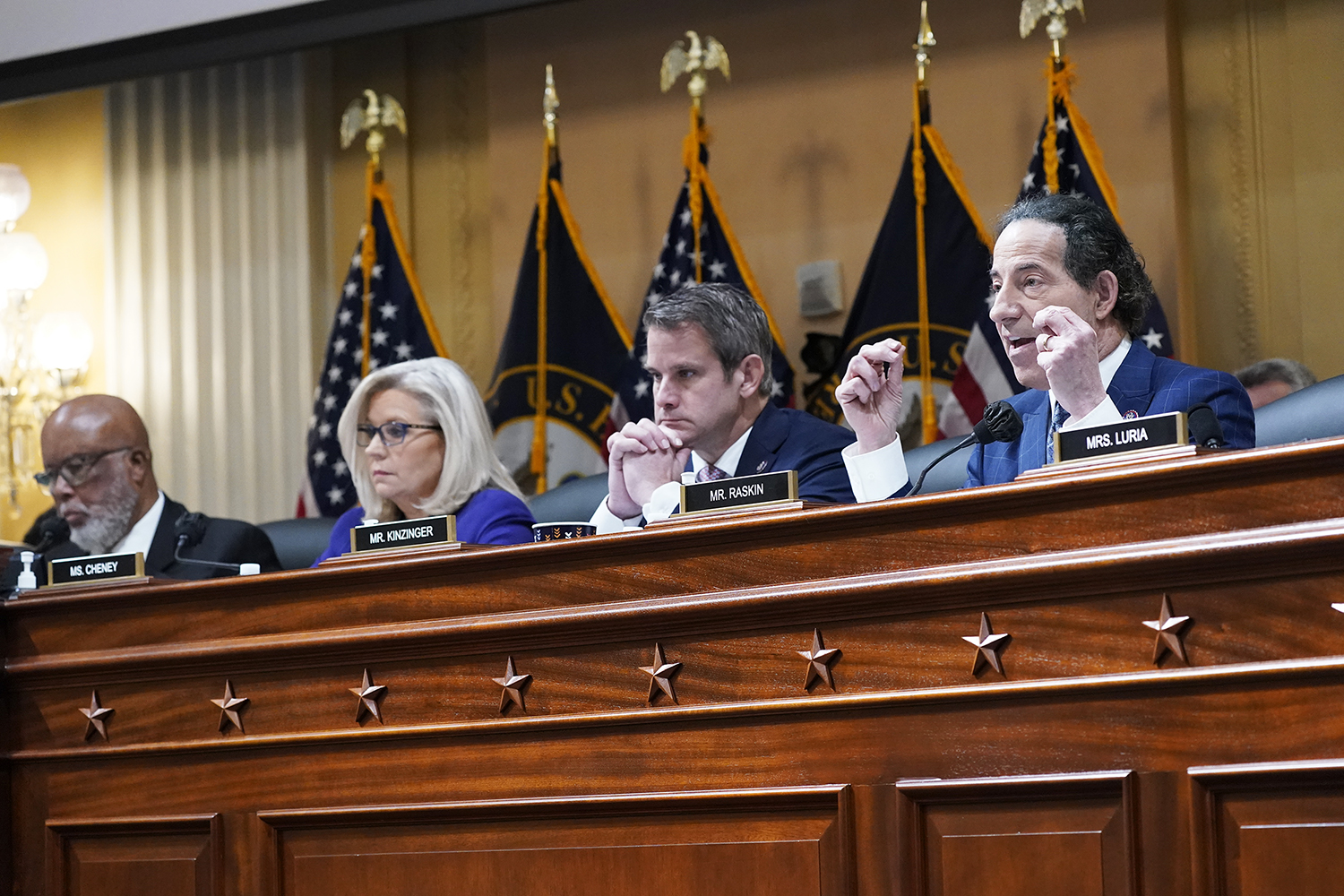 But Amanda Tyler, executive director of the Baptist Joint Committee for Religious Liberty, said it’s imperative for Americans, particularly people of faith, to publicly mark the insurrection’s “solemn anniversary” precisely because the phenomenon of Christian nationalism was not “fully explored” by the Jan. 6 Select Committee.

“It’s up to all communities, and I think particularly Christian faith communities, to understand what Christian nationalism is, to talk about what role it plays on attacks on democracy, not just on Jan. 6, but continuing attacks with election denial, and conspiracy theories,” Tyler said. “We must stay alert to the threat.”

On Friday, Tyler will make the opening remarks at a “Sunrise Prayer Vigil for Democracy” in Washington, organized by Christians Against Christian Nationalism, a project of the Baptist Joint Committee, and the nonprofit Faithful America.

Vigil participants have been invited to gather outside the Library of Congress, behind the Capitol, to pray for religious freedom, democracy and healing, emphasizing the “broad Christian opposition to Christian nationalism” that organizers see “as a threat to both democracy and the church.”

Tyler, who launched Christians Against Christian Nationalism in 2019, said many people have become more aware of the term “Christian nationalism” in the two years since the insurrection.

The Rev. Nathan Empsall, executive director of Faithful America, said it’s crucial for Christian faith leaders to mark the Jan. 6 anniversary “because it’s our religion that has been hijacked and distorted.”

Empsall pointed to the ReAwaken America roadshow headlined by Gen. Michael Flynn, a former Trump White House national security adviser, who has suggested that those who don’t embrace Christian nationalism are atheists and globalists. 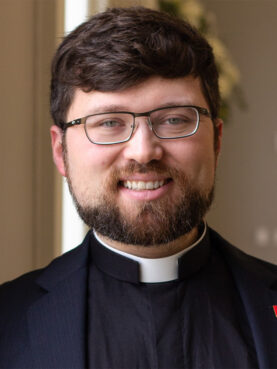 “They really try to hide the fact that the most vocal critics of Christian nationalism are their fellow Christians,” Empsall said.

Empsall, noted that Jan. 6 is also the Feast of the Epiphany, when Western Christians celebrate the arrival of the Magi to honor the newborn Jesus. On Friday, Empsall said, he will pray for God to change the hearts of Christians who subscribe to Christian nationalist ideas.

“Just as you help us to love them, help them with an epiphany,” Empsall said, reciting from his prayer.

The Franciscan Action Network will hold an interfaith vigil Thursday evening on the grounds of the Capitol, where religious leaders will share Scripture from their own traditions.

Catholic Bishop John Stowe of Lexington, Kentucky, and Sister Carol Zinn, executive director of the Leadership Conference of Women Religious, will lead the vigil. Other faith leaders expected at the vigil are the Rev. Liz Theoharis, director of the Kairos Center for Religion; Rabbi Stephanie Crawley, associate rabbi at Temple Micah; and Imam Talib M. Shareef, president and imam of Masjid Muhammad, the Nation’s Mosque in Washington, D.C.

Dunne said they decided to hold the vigil in person after last year’s virtual event, in commemoration with the first anniversary, attracted nearly 2,000 viewers, proving that many Americans are coming to terms with the events of Jan. 6 through the lens of faith.

“There’s a need for people to connect their personal beliefs and their faith values with upholding, supporting and improving American democracy,” Dunne said.